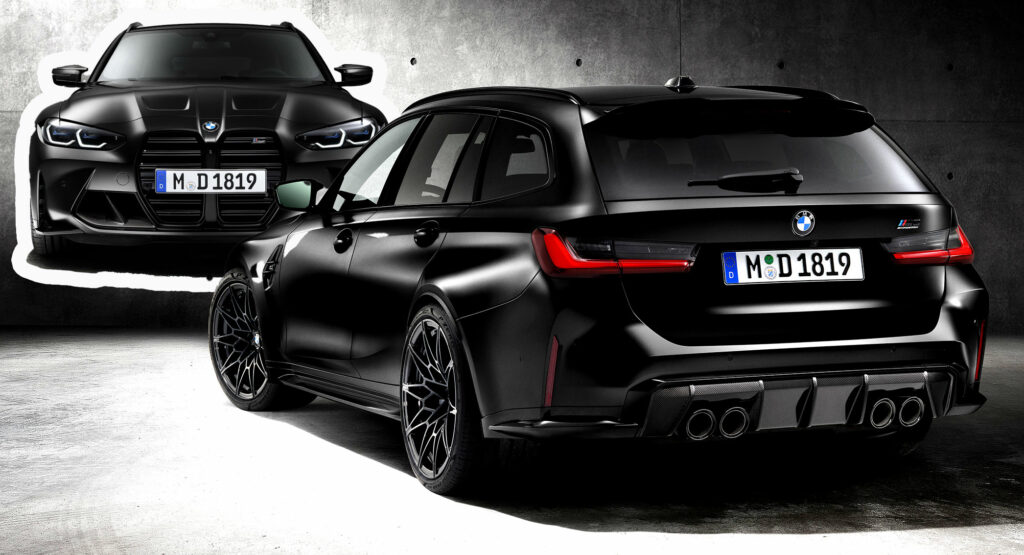 The Audi RS4 Avant and Mercedes-AMG C63 Estate are finally getting some competition as BMW has unveiled the first-ever M3 Touring.

Years in the making, the high-performance wagon is based on the M3 Competition and features a twin-turbo 3.0-liter six-cylinder engine that develops 503 hp (375 kW / 510 PS) and 479 lb-ft (650 Nm) of torque. It’s connected exclusively to an eight-speed automatic transmission, which sends power to a standard M xDrive all-wheel drive system. This setup enables the M3 Touring to rocket from 0-62 mph (0-100 km/h) in 3.6 seconds, before hitting an electronically limited top speed of up to 174 mph (280 km/h).

Of course, there’s more to the M3 Touring than a high-performance engine as the model has also been equipped with a sport-tuned suspension and an Active M differential. They’re joined by 19- and 20-inch forged alloy wheels that are wrapped in performance tires and backed up by a beefy braking system, which can be equipped with optional carbon ceramic discs.

Thanks to all these improvements, the M3 Touring was able to lap the Nürburgring in 7:35.060 which is a new record for wagons. However, the feat is more impressive when you consider the wagon is quicker than the M5 Competition and second-generation Acura / Honda NSX.

As for the rest of the car, it isn’t much of a surprise as it follows in the footsteps of the M3 and M4. As a result, there’s a big honking grille, aerodynamic mirrors, and a sporty four-tailpipe exhaust system. That being said, the model promises to be the most practical M3 ever created as the boot holds up to 53.3 cubic feet (1,510 liters) of luggage.

Speaking of the interior, the model follows in the footsteps of the 2023 M3 and adopts a Curved Display that consists of a 12.3-inch digital instrument cluster and a 14.9-inch infotainment system. They’re joined by Merino leather sports seats and a sport steering wheel.

Sadly, the M3 Touring isn’t coming stateside as it will only be offered in a handful of markets including Europe and Australia. The model will go into production in November and German customers can place their orders in September.