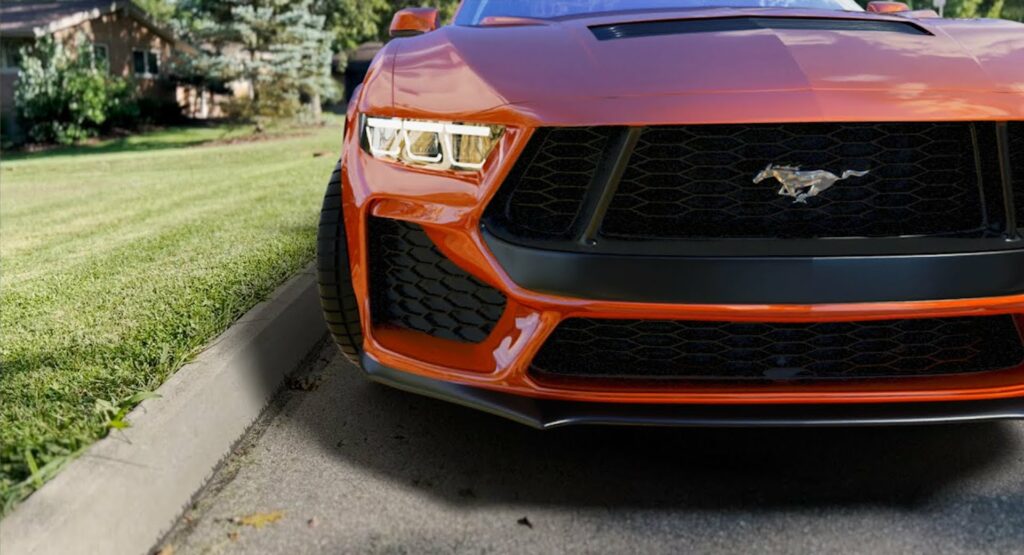 Automakers often use 3D technology to see what a design might look like in a real setting without having to go through the hassle of building full-size models and risk having them spotted in the open air. But now some smart artists are using similar tech to give us car guys an idea about how still-secret cars like the 2024 Ford Mustang might look.

Charles “Chazcron” Cronley is one such artist, and his video renders of the S650 Mustang, which Ford is getting ready to unveil later this month, moves the scoop game on from spy shots of disguised cars, leaked snaps of undisguised ones, official teasers and simple rendered images based on all of those sources.

In the latest short video, we see what appears to be a 2024 ‘Stang parked at the side of a road in a domestic street. The sun is shining, a dog is barking, there’s wind rustle on the microphone – the scene is set to trick your brain into believing you’re watching a video of the all-new Mustang.

Related: 2024 Ford Mustang Gives Us Our First Look Inside Its Fancier And Techier Cabin

And there’s the car, painted in a copper orange metallic and showcasing the LED headlights, black hood vent, and grille shape we’ve seen on leaked images of the real thing. The person holding the camera circles around the front, comes closer to the passenger-side light, and bends down, giving us a glimpse of reflections in the light lens, before pulling back to show the front-three-quarter angle.

Chazcron says he didn’t have any information about how the sides of the new car will look so just based them on the current car, and the chrome-look of the paint and mirror effect on the glass means it looks like something out of an old Gran Turismo game than a 100 percent believable car. But it’s fun, it is believable to a point, and if someone had shown me this back in the 1980s when I was looking at hand-drawn pen-on-paper artist’s renditions of future cars in magazines, my mind would have been blown.

Good as this street-scene video is though, a look at Chazcron’s YouTube channel reveals he’s made an even better video of the same virtual Mustang, this time parked in the artist’s garage. You don’t get to see the whole car this time, but this garage clip is so good I doubt most people would even realize it’s not the real car.

What Exactly Does a Personal Injury Lawyer Do… and How Can