Abortion pills, likely to gain popularity in Minnesota and elsewhere, expected to be next legal battleground

WASHINGTON – After the Supreme Court’s nullification of Roe v. Wade, attention has shifted to the expected legal fight over a popular way American women have been ending early pregnancies – by ingesting pills that produce what’s known as a medication abortion.

An increase in medical abortions in states like Minnesota, where abortion continues to be legal, is expected as clinics are deluged by women from other states where the procedure has been outlawed.

Medication abortion became legal in the United States in 2000, when the drug mifepristone was approved by the Food and Drug Administration. It became more popular after the FDA in 2016 expanded the time frame within which the drug could be taken — from seven weeks to 10 weeks into a pregnancy. The popularity of medication abortions rose again during the pandemic, when women were prescribed the necessary drugs through telemedicine or other remote contact with doctors.

Medication abortions involve the taking of mifepristone and another drug called misoprostol 24 to 48 hours apart. The first drug stops the development of a pregnancy and the second causes contractions and bleeding like those caused by a miscarriage.

The Guttmacher Institute said that in 2020 more than half – 54 percent – of the U.S. abortions were medication abortions.

But now the right to end a pregnancy in the privacy of one’s home is imperiled for American women who live in states that, post-Roe, have moved to end abortions. The ruling is likely to make abortion illegal in nearly half the country and places authority to regulate the procedure in the hands of state governments. 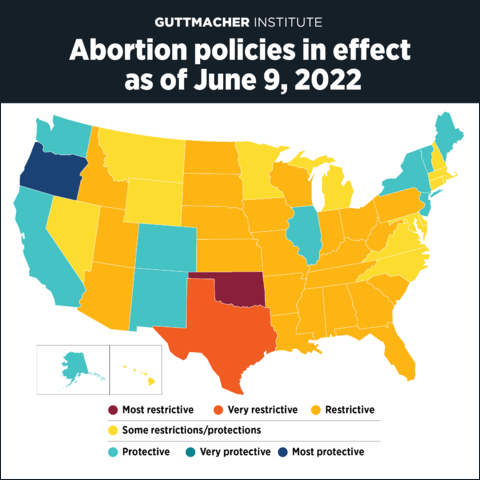 A legal fight is expected over what’s known as pre-emption, a doctrine that says federal law takes precedent over state law in certain circumstances. The Biden administration maintains that the FDA’s approval of mifepristone means states can’t prevent their residents from taking the drugs.

“States may not ban mifepristone based on disagreement with the FDA’s expert judgment about its safety and efficacy,” said U.S. Attorney General Merrick Garland.

State law, however, controls the “practice of medicine,” meaning states could prohibit the prescribing of mifepristone.

So, it’s unclear what the Justice Department can do. Lawsuits over the issue of medication abortion are expected to be filed and end up in federal appeals courts. But those courts are likely to be in circuits where conservative judges hold the majority.

For instance, Missouri-based Eighth Circuit Court of Appeals – which also hears case from Minnesota, Iowa, North Dakota, South Dakota, Nebraska and Arkansas – has the most Republican-appointed judges than any circuit in the nation, 10 out of 11. Four of those judges were appointed by former President Donald Trump.

A loss in a circuit court could always be appealed to the Supreme Court, but the high-court’s legal opinion on abortion is already known. Still, the issue of medication abortion is expected to become a legal battlefield.

“We’re going to have so many lawsuits,” said Wendy Parmet, an expert on public health at Northeastern University. “There’s going to be a lot of litigation coming down the pike.”

Parmet said anti-abortion states may limit the ban to the use of mifepristone to terminate a pregnancy, allowing the drug to be prescribed for other purposes.

“That would be the more sensible legal route,” she said.

But Parmet cautioned “supporters of access to these pills can’t be very confident they will prevail.”

The day before the Supreme Court overturned Roe, Sen. Tina Smith, D-Minn., introduced a bill that would codify the FDA’s guidelines on abortion medication. Smith said she wants to safeguard the protections the FDA provides medication abortions.

“Medication abortion is a safe and effective way to terminate a pregnancy,” Smith said. “I wanted to make sure FDA rules are put into law.”

The Protecting Access to Medication Abortion Act would guarantee that women could always access medication abortion through telehealth and certified pharmacies, including mail-order pharmacies.

“Clearly this won’t solve the problem,” created by Roe’s overturn, Smith said, but it would provide “an extra layer of protection,” for a popular method to end a pregnancy.

Smith, a former Planned Parenthood executive,  is aware that there’s little chance of Senate approval of her legislation. Democrats hold 50 votes in that chamber and 60 are required to end a GOP filibuster. If not for the filibuster, Democrats in Congress would fight back against the Supreme Court’s overturn of Roe with legislation that safeguard’s abortion rights for all. A bill guaranteeing abortion access nationwide failed last month in the Senate.

Still, Smith said introduction of her bill will raise the issue and help counter GOP claims that medication abortions are unsafe.

“There are Republican extremist organization that are trying to spread misinformation,” Smith said. “I want this legislation to counter some of that misinformation.”

South Dakota Gov. Kristi Noem, a Republican, said this week she would implement a plan approved by state lawmakers to restrict the medication abortion pills.

“These are very dangerous medical procedures,” said Noem, referring to abortion pills. “We don’t believe it should be available, because it is a dangerous situation for those individuals without being medically supervised by a physician.”

According to a study of more thana 47,000 women in 120 medical trials conducted by Contraception, an international reproductive health journal, medication abortions successfully ended pregnancies in 96 percent of these women. “Across all trials, 119 evaluable subjects (0.3%) were hospitalized, and 45 (0.1%) received blood transfusions,” the journal said.

Since the Supreme Court issued its decision last week, there’s been a new surge in medication abortions, with women from states that have outlawed abortion crossing into states like Minnesota where the procedure is still legal to have a remote or in person consult with a doctor and pick up the prescription needed to end a pregnancy.

Just the Pill, a non-profit telemedicine abortion provider based in the Twin Cities serves people in Minnesota, Montana, Colorado and Wyoming, as well as those crossing the border from surrounding states, reported a sharp increase in requests for its services since last week. It plans to deploy “a fleet of mobile clinics” that will park along state borders, providing consultations for medication abortions and dispensing pills, said Just the Pill spokeswoman Lisa Falconer.

Currently, Just the Pill has deployed its mobile clinic fleet only in Colorado, but Falconer said the organization is raising money for the deployment of another fleet in the Midwest.

Since the Supreme Court struck down Roe last week, there has been a push to purchase   abortion pills ordered online from overseas, though the legal situation is murky and carries potential risks.

“The greatest tragedy in overturning Roe is that it puts people in situations that are unsafe,” Smith said.