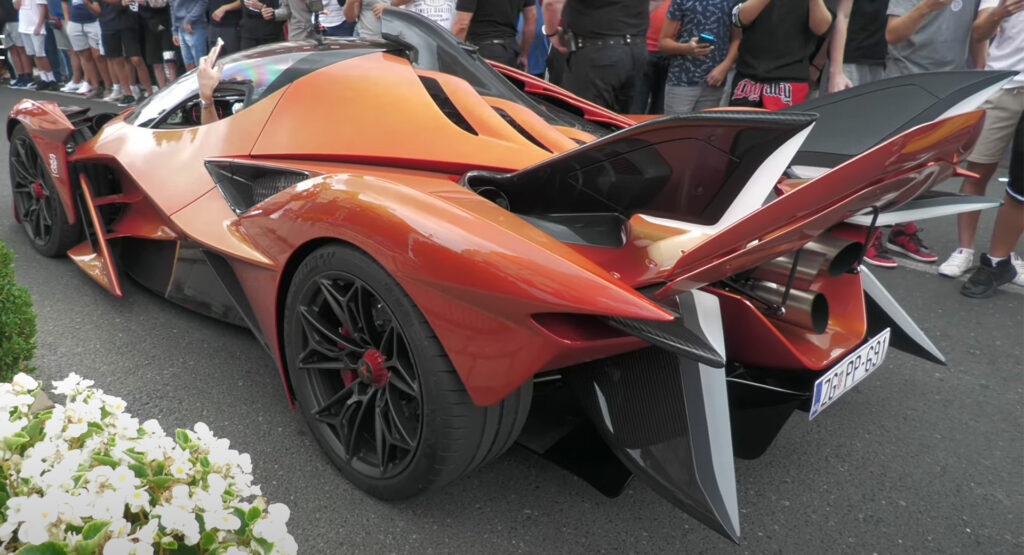 Apollo Automobili’s Project Evo recently made a rare appearance during a supercar event in Croatia and as far as extreme street cars go, we think it is hard to beat.

The small car manufacturer first burst onto the scene a few years ago with the launch of the Intensa Emozione, also known as the IE. That car got the supercar and hypercar industry buzzing thanks to its over-the-top design and screaming, Ferrari-derived 6.3-liter naturally-aspirated V12 engine. In November last year, Apollo unveiled the Project Evo, its latest limited-run supercar and this is our first time seeing it in the flesh.

Apollo’s creations are always bold and it’s no different with Project Evo. Its exterior design is so dramatic that it is hard to know where to look but if you’re like us, your eyes may be immediately drawn to the rear end where huge fins stretch up from the engine cover and down from the rear diffuser. Additional fins are found in the center of the rear bumper and all six of them feature bright LEDs, meaning the Evo really does look like a spaceship from the rear.

The front of the car is also something to behold thanks to the LED headlights, the dramatic front splitter, and the plethora of exposed aerodynamic elements. We’re also particularly fond of the curvaceous shape of the glass house, the hydraulically-operated rear wing, and the prominent roof scoop.

Curiously, Apollo has never actually stated what engine is found beneath the skin of the Project Evo, nor how many examples it intends to produce. Based on the sound alone, we suspect it has the same modified V12 as the Apollo Intensa Emozione, likely also pumping out 769 hp through the rear wheels.