Aston Martin has unveiled another speedster, this time, though, the DBR22 is just a concept. Intended to demonstrate the company’s latest technology and its in-house customizing house, Q by Aston Martin, the concept car is being displayed at Monterey Car Week.

The automaker says that the DBR22 Concept was inspired by its racing heritage. Specifically, the design pays tribute to the 1952 DB3S and the DBR1, which won Le Mans in 1959 with Carroll Shelby and Roy Salvadori behind the wheel.

Featuring a brand-new body, the design team wanted to minimize the number of body panels used in order to create a more sculpted, muscular appearance. Its grille, meanwhile, features a new carbon fiber design whose two vertical slats bisected by a single horizontal slat design was inspired by the race cars mentioned above. The DBR22 isn’t all about looking backwards, though.

Read Also: Aston Martin’s Limited V12 Speedster Wants To Blow You Away With Its 690 HP 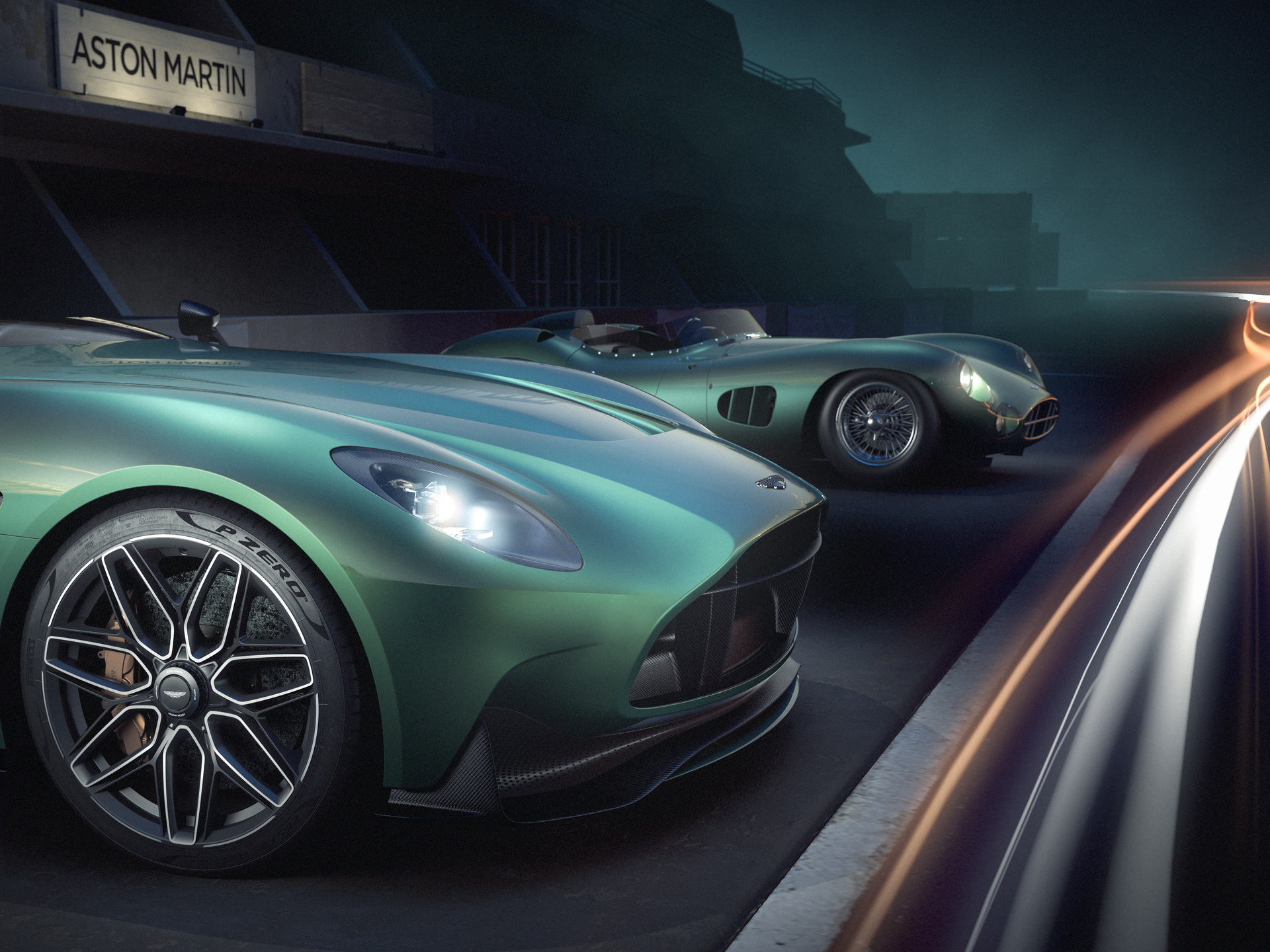 “We set our design systems to ‘hyper-drive,’ pushing the exploration of formalism further and endeavoring to express a future in the here today,” said Marek Reichman, Aston Martin‘s chief creative officer. “Where could we go with the surfaces, proportion and form. Combining this approach with advanced process, technology, and materials, we’ve effectively modernized our racing bloodline and created a new pedigree.”

That cutting edge technology comes in the form of how this speedster manages the air around it. From its thin side mirror stalks, to the perforated panel under the headlights that allows hot air to exit the rear of the car and works in concert with the diffuser to provide downforce for the speedster.

In addition, the company used 3D printing for the first time on this one-off concept. The method was used to print the parts that make up the rear subframe. Formed out of aluminum, the novel technology allowed Aston Martin’s engineers to reduce the weight of the unit significantly without reducing stiffness. That was important, because ensuring that this was a driver’s car was important to the team. 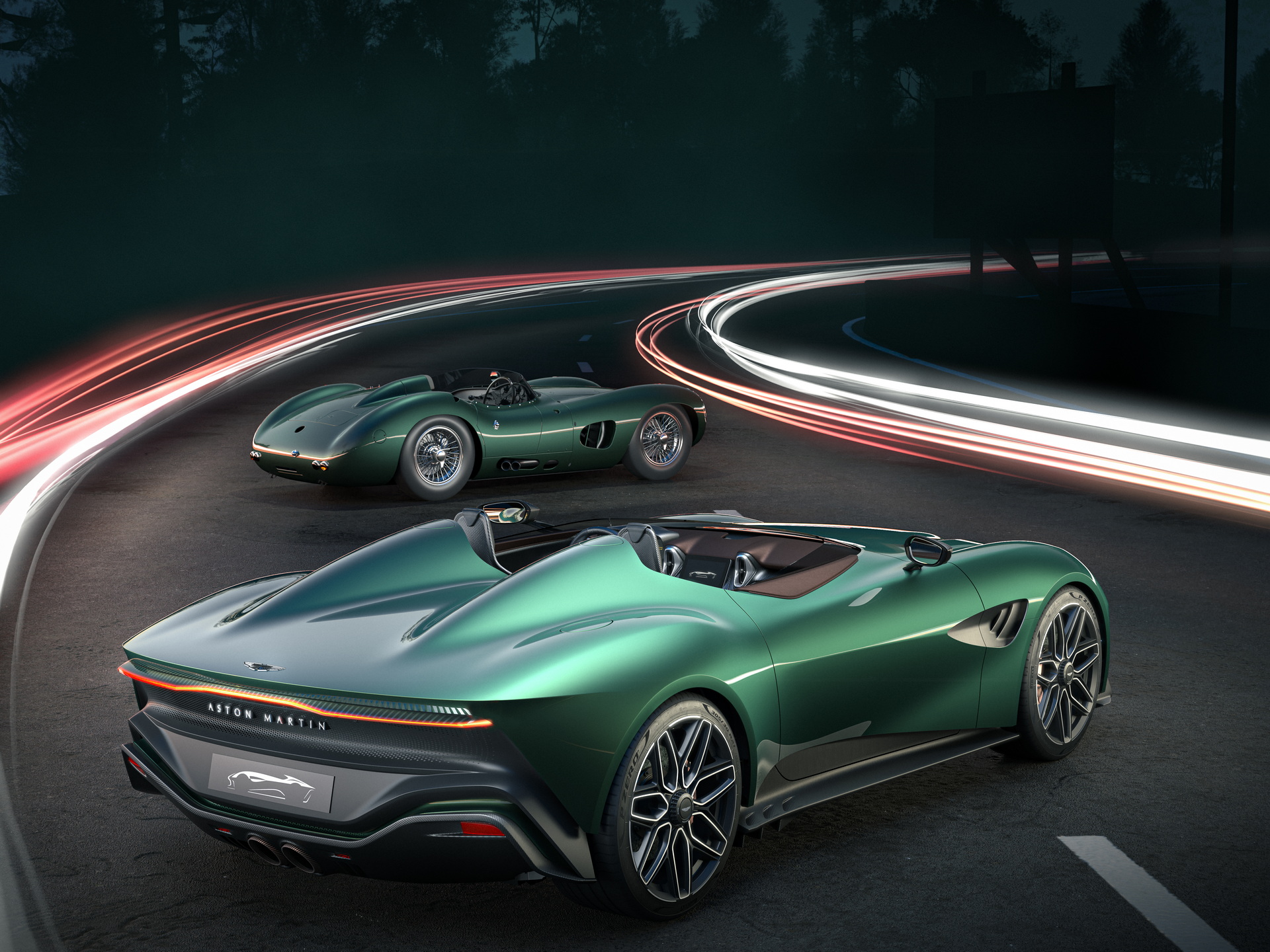 “DBR22 showcases Aston Martin’s unique capabilities, with world-class design combined with an agile, intelligent approach to engineering and production,” said Roberto Fedeli, Aston Martin’s chief technical officer. “For a car that was designed to celebrate the ultimate bespoke customization service, the engineering developments mean DBR22 truly has the dynamic theater to match, ensuring the drive is just as addictive as its looks.”

Twin-Turbo V12 Power Under The Hood

Power comes from a 5.2-liter, twin-turbo V12 that has a peak output of 705 hp (526 kW/715 PS) and 555 lb-ft (753 Nm) of torque. The engine is paired to an eight-speed automatic transmission that uses something called torque-shaping to improve how the car delivers its force to the road. Capable of hitting 60 mph (96 km/h) from a standstill in 3.4 seconds and run onto a top speed of 198 mph (319 km/h), it’s certainly powerful. Thanks to that new rear subframe, adaptive dampers, and a pinned steering column that brings greater accuracy to the handling, Aston Martin promises that the DBR22 is a track weapon, just like its forebears.

Unfortunately, as a concept, few are likely to find out just what that performance feels like. Members of the public can, however, see the car at the Pebble Beach Concours d’Elegance from Friday, August 19, to Sunday, August 21.