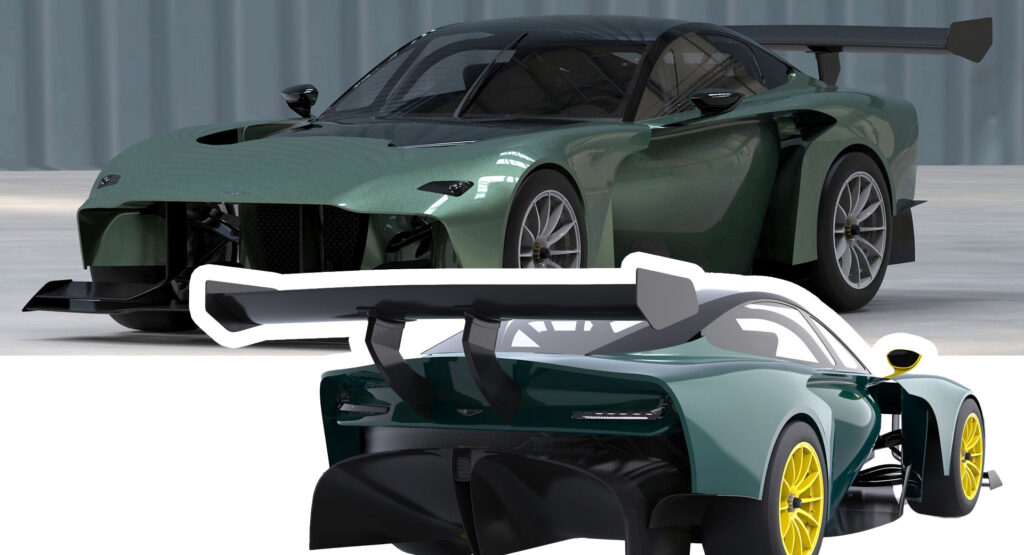 This story contains independent speculative illustrations of a fictional Aston Martin GT racecar created by Andrey Suleman that are neither related to nor endorsed by Aston Martin.

The creation you’re looking at is dubbed the Aston Martin GT Racecar and while it has been created solely for the virtual world, it shows one path the carmaker could take if it wants another track-only special.

Created by designer Andrey Suleman, the Aston Martin GT Racecar seemingly takes inspiration from the Vulcan and the Valkyrie, combining some of the key elements of both cars into a single, performance-focused beast.

The overall shape, size, and profile of the car is similar to the Vulcan but its aerodynamics are far more advanced and far more similar to the radical design of the Valkyrie.

The combination of the two is particularly evident from the front fascia where there is a long hood like the Vulcan but a completely open fascia and front splitter like you’ll find on the Valkyrie. Similarly, the concept features large openings behind the front wheels to aid in aerodynamics.

When viewed from the side, the intriguing shape of the doors immediately catch the eye, as does the positioning of the wing mirrors. The car also features a large glass roof canopy.

The rear end is perhaps the area that will most remind you of the Vulcan and Valkyrie. Like the former, it has a towering rear wing and a set of simple LED taillights. The GT Racecar then features a massive diffuser complete with large Venturi tunnels, just like the Valkyrie.

There’s no indication that Aston Martin is actually working on a vehicle like this as it already has a lot on its plate. It is currently working on a number of new road cars with perhaps the most significant being the Valhalla plug-in hybrid, which is positioned just below the Valkyrie.

What Investors Should Bet On Amid Global Downturn — Analysts’ Take

What Investors Should Bet On Amid Global Downturn — Analysts’ Take