Audi USA today revealed that its most powerful rear-wheel-drive car ever, the limited edition R8 GT, will start at $249,900 (plus destination, which on other R8s is $1,495). American buyers will also be treated to a few unique additions.

Of the 333 R8 GTs that Audi is making globally, 150 will be sold in the U.S. Offered in three colors (Tango Red Metallic, Daytona Gray Metallic, and Mythos Black Metallic), they will be split evenly (50 of each) among the examples coming to the U.S.

In addition to the regular aero elements offered on the car (about which you can read more below), the U.S. market version of the R8 GT will also get carbon side blades, door side sill inlays, and special exterior mirror housings. The American model will also get a sport exhaust system, Audi laser lights, dynamic steering, a Bang & Olufsen sound system, and an exclusive diamond stitched headliner with red accent stitching. 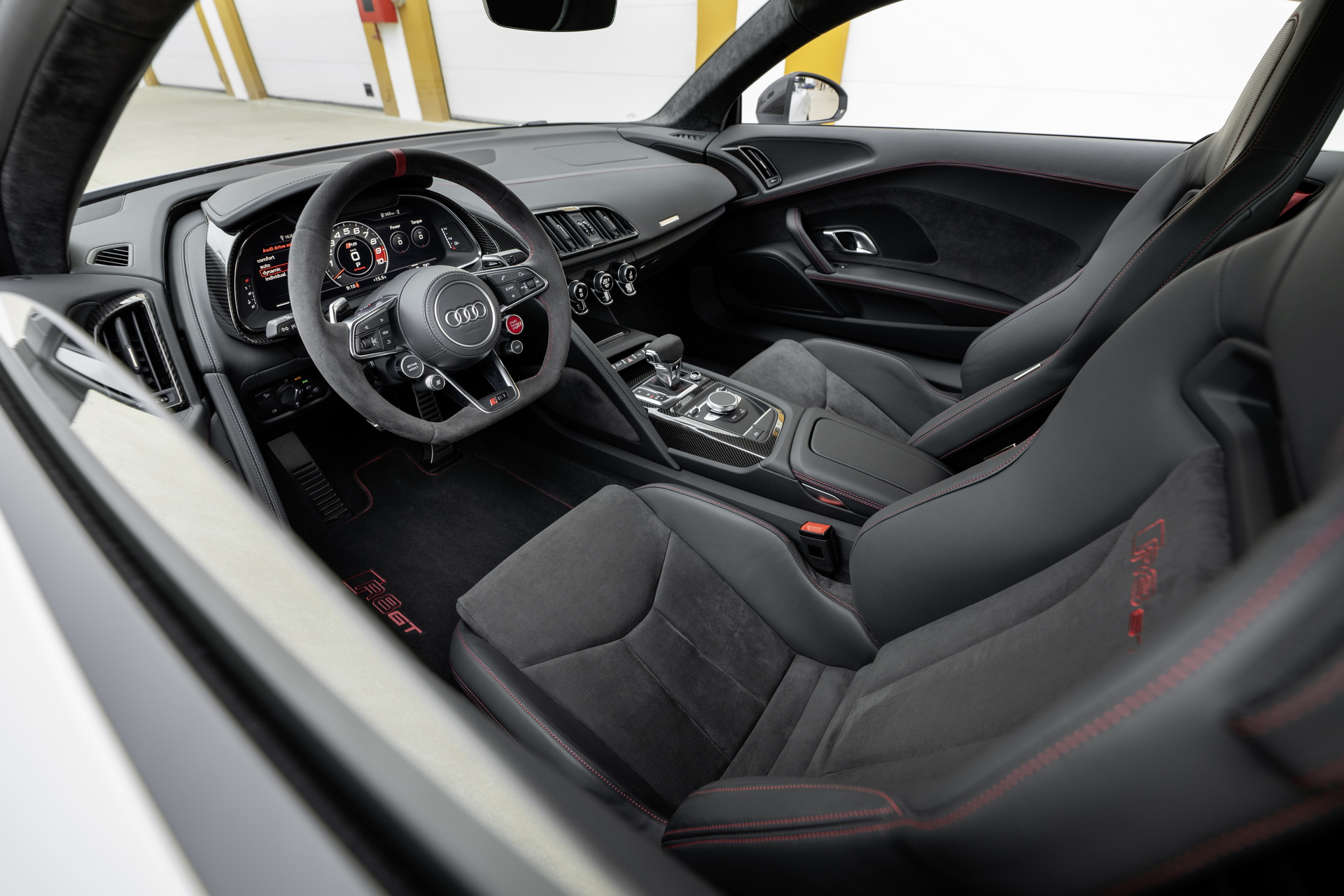 Not only will drivers have access to all that power, they’ll also have control over how it’s delivered. This is the first customer car from Audi Sport being offered with a “Torque Rear” mode, which gives drivers access to seven power curves stored in the traction control system. These vary from the first-timer friendly Level 1 mode, which offers drivers support to prevent wheel spin, to the expert-only Level 7, which reduces the traction control to its minimum setting.

Power is routed to the rear wheels via a seven-speed dual-clutch transmission. It has even faster shift times than other R8s, allowing for faster acceleration (3.4 seconds to 62 mph/100 km/h) and greater control over the moments of oversteer that define this model.

Mostly made by hand at the same plant that makes the R8 LMS racecar, the R8 GT has been subjected to several weight-saving measures, including milled-cut, forged 20-inch wheels that are wrapped in Michelin Pilot Sport Cup 2 tires.

The ceramic brakes also help save weight, as do the bucket seats, and the carbon fiber reinforced plastic suspension parts, such as the anti-roll bar. All together, the diet means that the R8 GT has a curb weight of 3,516 lbs (1,595 kg), or 55 lbs (25 kg) less than the standard car.

Up top, it also gets a range of motorsport-inspired aero elements. Developed in a wind tunnel, the carbon fiber wings and strakes improve stability and downforce over the rear wheels.

Inside, the Audi R8 GT is black with a number of red highlights, including the contrast stitching and the seatbelts, an option that hasn’t been available since the 2012 R8 GT. The floor mats feature the model’s name, while the car’s unique production number is shown in the middle of the gear selector.

Audi USA says that the 2023 R8 GT will start arriving in dealerships at the start of next year.