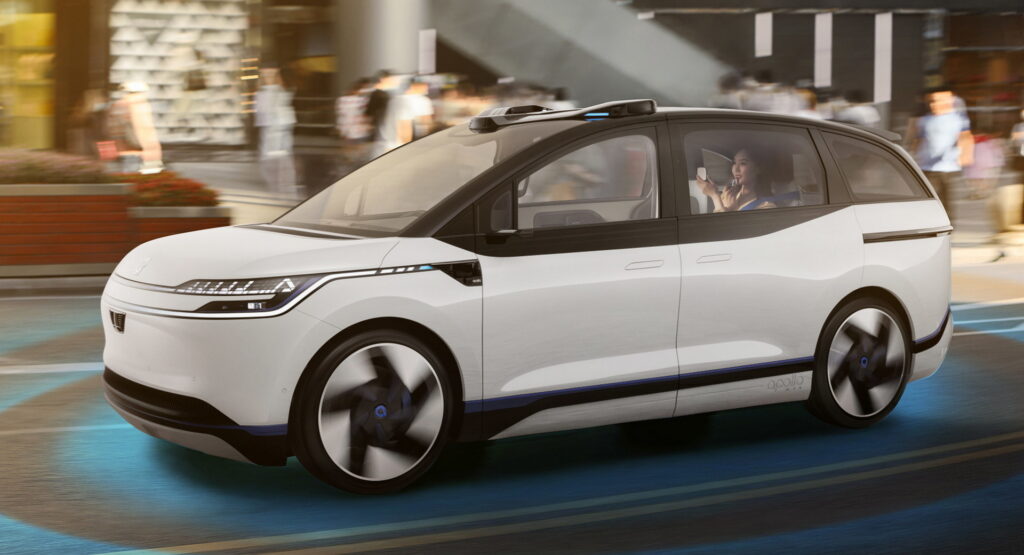 Chinese engine giant Baidu has unveiled its latest-generation autonomous vehicle with the Apollo RT6. Designed from the ground up, the RT6 will enter service as a robotaxi with Apollo Go, the company’s ride-hailing service, next year.

Designed to look a little more like a traditional vehicle than, say, Zoox’s autonomous robotaxi, the Apollo RT6 does have a flat floor and a removable steering wheel to allow space for more passengers, a desk, or a small vending machine. At 187-inches (4,760 mm) long, it’s about four inches (100 mm) longer than an Audi Q5.

Although it may look like a minivan, its design has been considered carefully. With an X-shaped band running along the hood, the vehicle’s 8 LiDAR sensors and its 12 cameras have been integrated into the appearance of the vehicle. In total, Baidu says the Apollo RT6 has 38 sensors that help is obtain accurate, long-range detection on all sides.

With nearly 20 million miles (32 million km) of testing under its belt, Baidu‘s corporate vice president, Zhenyu Li, says that the vehicle drives as well as a human with 20 years of experience behind the wheel.

Based on the new E/E vehicle architecture, the Apollo RT6 was developed specifically to be autonomous. The company’s previous generation vehicles, on the other hand, featured AV technology that had been retrofitted onto traditional vehicles.

The real innovation in all of this, the company believes, is the price. Despite featuring cutting edge technology, Baidu says that the Apollo RT6 has a per-unit cost of RMB 250,000 ($36,927 USD at current exchange rates). That, it says, brings autonomous vehicles within reach of more people.

“This massive cost reduction will enable us to deploy tens of thousands of AVs across China. We are moving towards a future where taking a robotaxi will be half the cost of taking a taxi today,” said Robin Li, co-founder and CEO of Baidu.

Rides will be run through Apollo Go, Baidu’s robotaxi service, which has been operating since 2020. The service has served more than one million orders in 10 cities across China and the company says it has received a license to operate robotaxis without humans in the driver’s seat in Beijing, per Reuters.