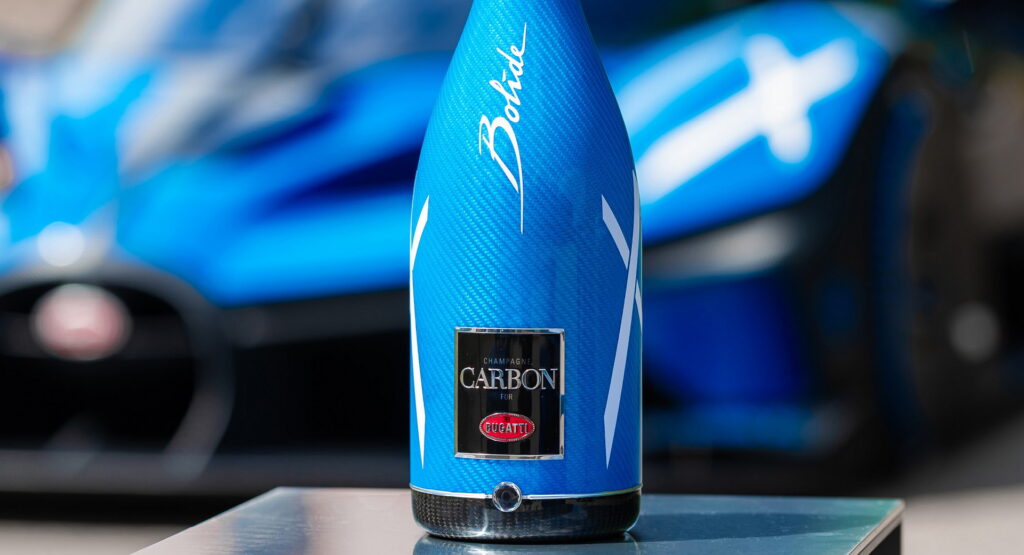 Coming as the latest product in their line of non-vehicular luxury goods, Bugatti has just revealed their newest collaboration with winemaker Champagne Carbon called the EB.03 Edition, marking the third time they’ve partnered with the winemaker to commemorate different milestones in their history.

The dark blue EB.01 Edition commemorated Bugatti’s 110th anniversary, the EB.02 Edition was inspired by the Chiron Super Sport 300+ with its black and orange bottle, and now the EB.03 Edition is here with a bright blue carbon weave inspired by the Bolide track car. In addition to that carbon fiber, the bottle features the car’s signature X-shaped headlights as well as “Bolide” printed in script between them. Rounding off the design is a black carbon fiber base adorned with silver finishings as well as a black Champagne Carbon plaque with the Bugatti logo on it, also trimmed in silver. 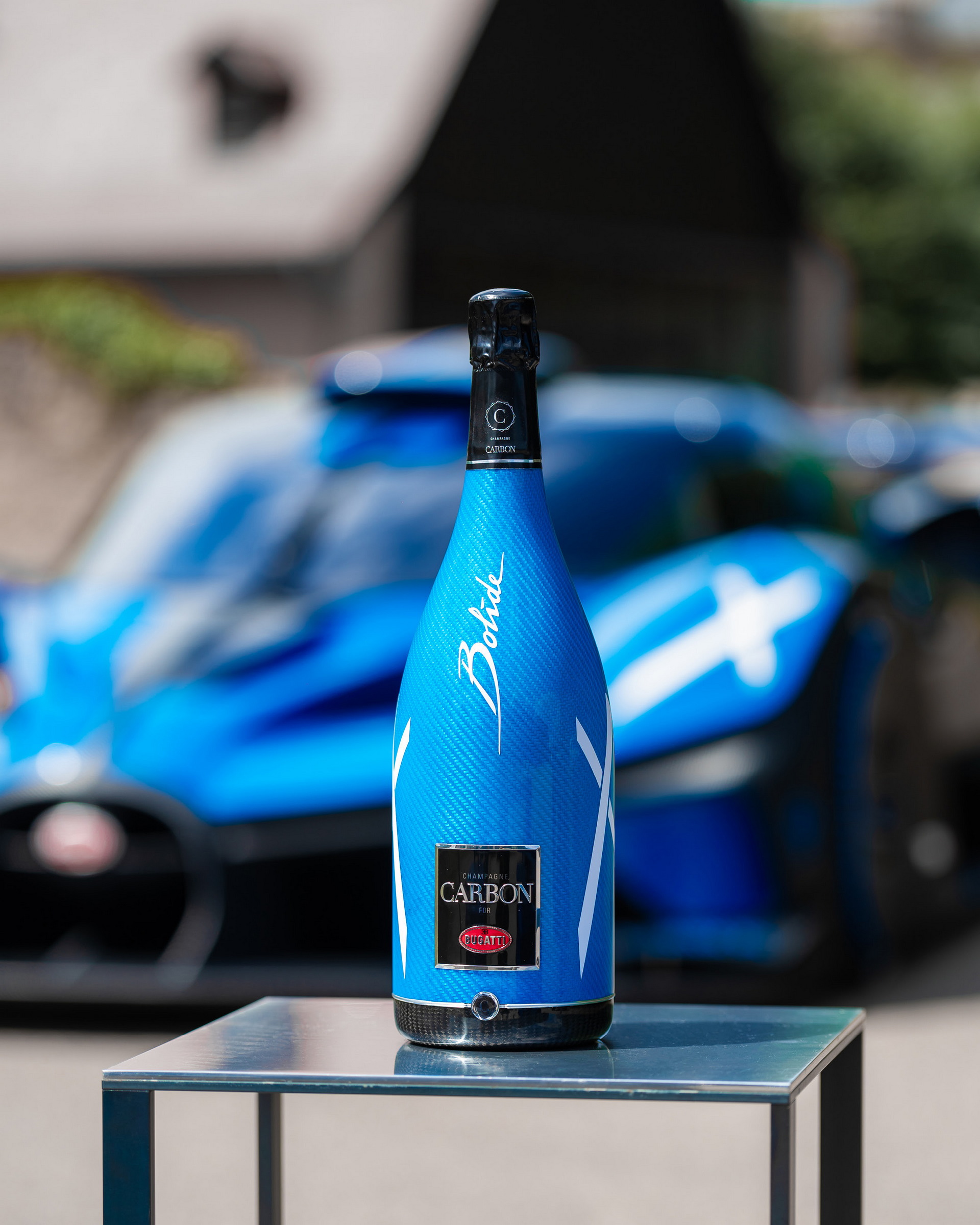 Inside the bottle is a vintage 2013 Blanc de Blancs that’s said to be “the result of a cold and wet winter in 2013, followed by a cool spring and a late grape harvest.” As for how that affects its taste, they describe it as “an intense and fresh wine, with good acidity and excellent ageing potential.”

Going into further detail, Alexandre Mea, CEO of Champagne Carbon, said: “This 2013 vintage brings with it initial scents of citrus, followed by aromas of spring flowers. Then a growing intensity toward yellow citrus, toasty notes and aromatic herbs. On the palate it provides an initial intensity, followed by a creamier more velvety texture. The finish reveals hints of acidity. The ƎB.03 will enhance a delicate recipe such as a scallop ceviche, a red tuna sashimi or a filet of Saint-Pierre with citrus fruits.” 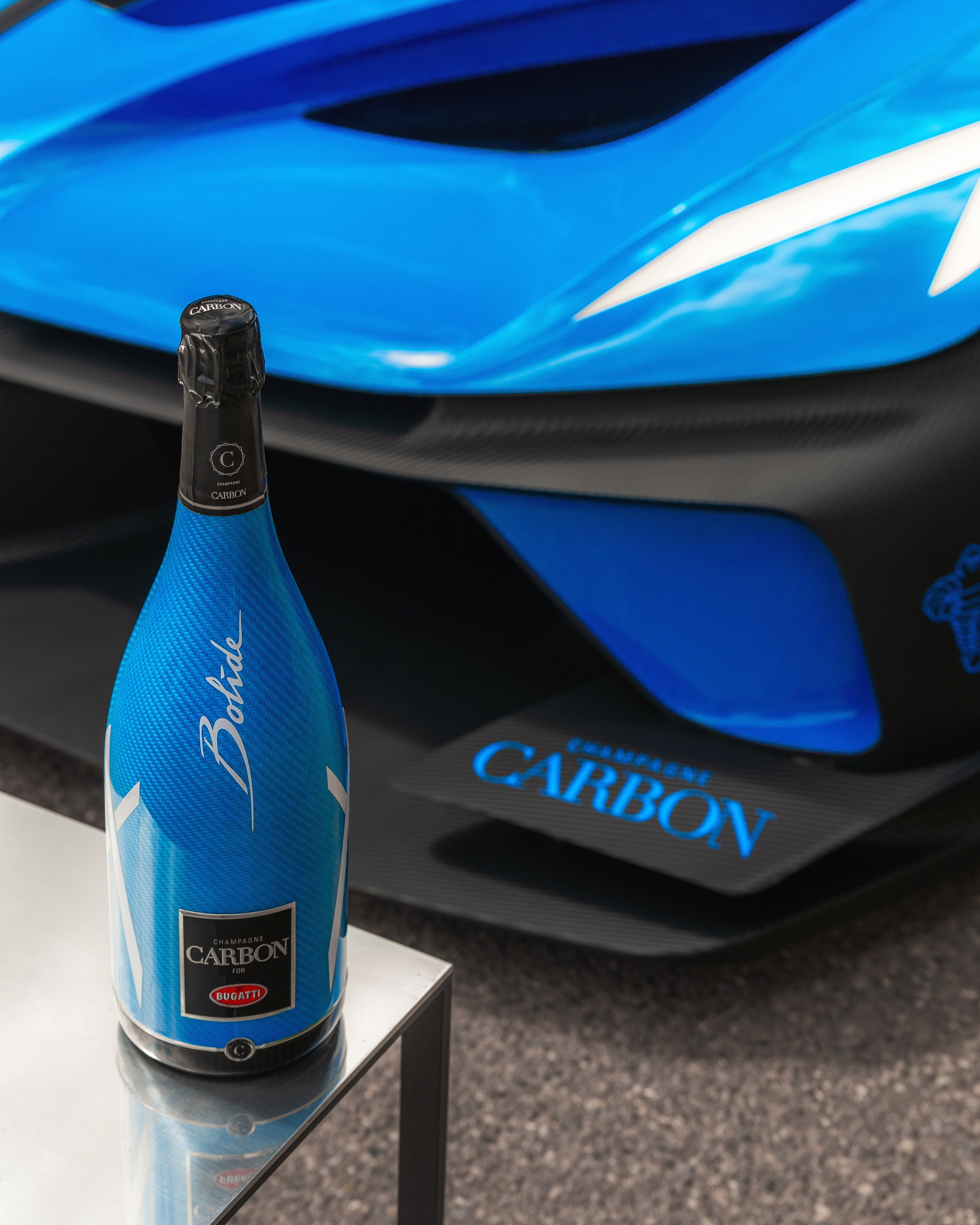 Regarding the project overall, Wiebke Ståhl, Managing Director at Bugatti International, gave his thoughts: “The Bugatti Bolide is one of the most special creations to ever have been imagined by our designers and engineers in Molsheim, bringing new levels of innovation and performance to the world of production cars. Like any Bugatti, it is incomparable, and we challenged our partners at Champagne Carbon to create something equally unique in celebration. What they have delivered is a perfect pairing for Bolide; beautiful, rare and with an edgy intensity.”

There’s no word on pricing or availability on the Champagne Carbon EB.03 Edition, but knowing Bugatti, we’d imagine it will be neither cheap nor plentiful.