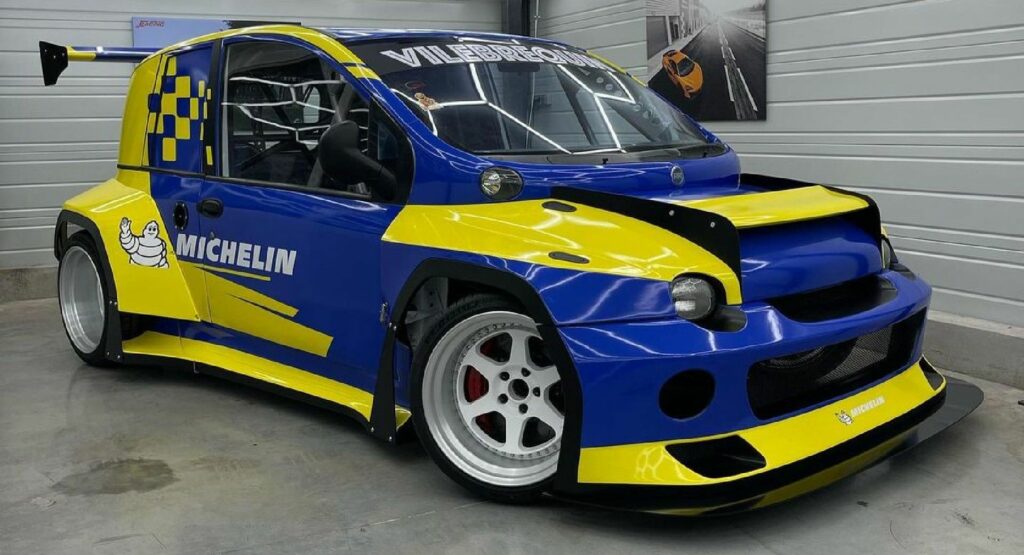 The Fiat Multipla combines an ingenious six-seater cabin layout with controversial styling that still looks radical almost a quarter of a century after its launch. The quirky Italian model was chosen by French Youtubers Sylvain Lévy and Pierre Chabrier for a crazy tuning project set to premiere at the 2022 Paris Motor Show. The fastest Multipla ever gets a 1,000 hp V8 engine, motorsport-inspired chassis upgrades, and an ultra-wide bodykit.

The idea for the project started back in 2019 and following an overly successful crowdfunding campaign and three years of work, the monster-minivan is ready to hit the track. The finalized design – minor a few details – has already been presented by Vilebrequin, prior to the model’s “world premiere” in Paris where the detailed specifications will be announced.

Also Read: An Electric Fiat Multipla Was Once Sold In China By The Now-Bankrupt Zotye

You don’t need more than a quick glance to realize that this is not your typical Fiat Multipla. First of all, the model – based on the original pre-facelift Multipla (1998-2004) – has been converted from a five-door to a three-door, and the body has been cut on the fenders and bumpers to make room for the new aero. The highlight is the boxy front and rear fenders with integrated DTM-style inserts which increase the already impressive width of the Multipla by a fair margin.

The prominent spitter on the bespoke front bumper, the bonnet-mounted spoiler, the massive rear wing, and the diffuser with transparent fins are taking visual mods to another level. This crazy bodykit was created by W-Autosport, and is combined with a unique set of wheels by Work, shod in ultra-wide Michelin tires. Michelin is one of the main sponsors of the project, which is why their name is featured on the blue-and-yellow livery.

Predictably, the interior is stripped out, with the stock six-seater layout giving way to a two-seater configuration due to the large transmission tunnel in the middle. A pair of racing seats by Sabelt, a clip-on racing steering, a short-shifter, and a full roll-cage set the mood for a family-friendly track day.

While the extensive modifications on the underpinnings have not been detailed yet, we know that the Multipla has received a powertrain transplant from a Chevrolet Corvette C6 Z06. The American-sourced V8 has been tuned further, in order to achieve the target output of 1,000 hp (735 kW / 1,014 PS). This is certainly an upgrade over the stock naturally-aspirated 1.6-liter 16-valve four-cylinder unit that produced 102 hp (76 kW / 103 PS) back in the day. The model also got coilover suspension, a strengthened chassis, and uprated brakes to match the increased output.

We will learn more about the wildest Multipla in existence at the Paris Motor Show, starting October 17. While the model won’t be as fast as the Ford Pro Electric SuperVan concept, or the F1-powered Renault Espace one-off, it is definitely out there with the craziest minivan-based builds in the world. The YouTubers have pledged to make several videos with the modified Fiat, showcasing its performance credentials.