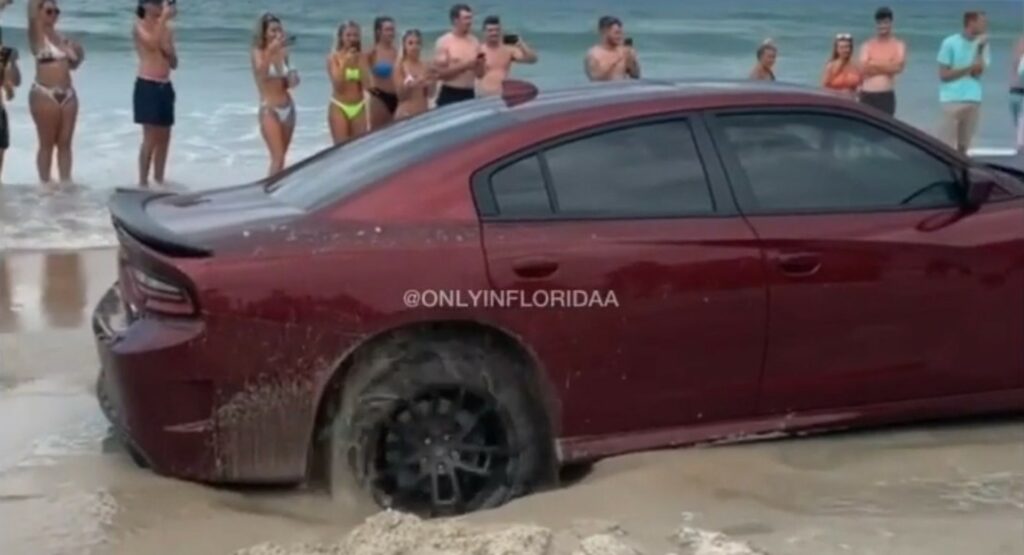 If you’ve never driven a vehicle on the sand you might be unaware of its dangers. Unlike gravel or dirt trails, sand presents a high likelihood of stranding vehicles because of its tendency to sink quickly under the weight of a vehicle. Here’s a video that shows you the exact moment when two Floridians found out how not to escape the beach.

First posted over on Reddit in the IdiotsInCars subreddit a couple of weeks ago, the video is as comical as it is somewhat sad. It seems that a Dodge Charger 392 beached itself as the surf was coming in and quite clearly needed a savior before it became the next vehicle to need a full-scale recovery effort. With just rear-wheel drive to rely on and sand quickly disappearing beneath it, a tow out was the only solution.

It seems that the only vehicle available at the time was a lifted Ram 2500. From what we can tell, it looks like the perfect tool in many ways to do this job. It has all-wheel drive as evidenced by the 4×4 badge on the back, which is vital in this situation, and seems to have a Cummins diesel badge on the front fender, meaning it should have the torque to rip just about anything out of the sand. Sadly, things go downhill quite quickly.

Read More: I Got Stuck With A 4WD Jeep In The Sand And It Was All My Fault

Around the 18-second mark of the nearly 90-second video, we see both vehicles from the Stellantis family spinning their tires on the beach. The Charger is down to its axle and the Ram sinks a few inches into the soft surface itself. From what it looks like, the truck might still be in 2WD. During the second attempt the tow rope snaps.

By the time they affix a chain to each vehicle, the waves are creeping up past the body of the sedan and underneath the truck. That’s when all four tires on the Ram begin to spin and it begins to sink into the sand itself. It doesn’t help that the truck is using low-profile tires with giant wheels. That combination doesn’t allow the truck to air down the tires for better grip.

As the video ends it seems that both vehicles are solidly a part of the landscape as the sea encroaches on them. Thankfully, a tow truck showed up later and both vehicles managed to escape before major damage took place.