“My editor told me that I should be very grateful that I started as a writer in Minnesota, because there are so many opportunities through the library system, through bookstores, through reviews, through book groups, that kind of thing,” she says. “We are a state that reads, and I think that’s really wonderful.”

Hart will receive the lifetime achievement award at Bouchercon 2022: World Mystery Convention, when it comes to the Twin Cities this weekend. At the 53-year-old convention, named after author and critic Anthony Boucher, mystery authors, publishers, agents and fans converge for panels, talks, readings, signings, and socializing.

Hart will appear virtually on a panel with her good friend and fellow Minnesotan William Kent Krueger on Saturday morning. Krueger, who is the author of the Cork O’Connor mystery series, will interview her. The two travelled together, along with fellow mystery writer Carl Perkins, for 11 years, doing conferences and writing seminars.  “I’m a huge fan of his writing, and I’m a huge fan of him,” she says.

Hart’s love of mysteries goes back to her childhood, when her parents gave her the entire Sherlock Holmes canon. She read all of the stories, and carried them with her to college. It wasn’t until after she graduated from college that she began reading more contemporary mysteries.

She started writing her first book, “Hallowed Murder,” in 1987, during her summer break from being a kitchen manager at Delta Gamma at the University of Minnesota. At first, “it was terrible and awful,” she recalls. Then, she began going through P.D. James’ novels, taking them apart to see how they were put together.  “I tried to understand how she developed the plots or characters, how she created tension, how she used foreshadowing, all the things that you need to do to create a vivid story,” Hart says. The following summer, she took another crack at it, and published “Hallowed Murder,” in 1989. It was the first of 27 books in the Jane Lawless series, about a restaurateur who solves crimes. Hart also wrote eight Sophie Greenway books, about a food critic sleuth.

Based in Minnesota, Hart won’t be attending the conference in person because of physical limitations and says she’s not sure if she’ll publish again. “I wrote for almost 34 years, and my last book was out two years ago,” she says. “I thought, I just had to get off the hamster wheel. I just felt I needed a break.” Still, she’s been spending her time reading, completing hundreds of books in the last two years. “I’m going to just read to my heart’s content,” she says. 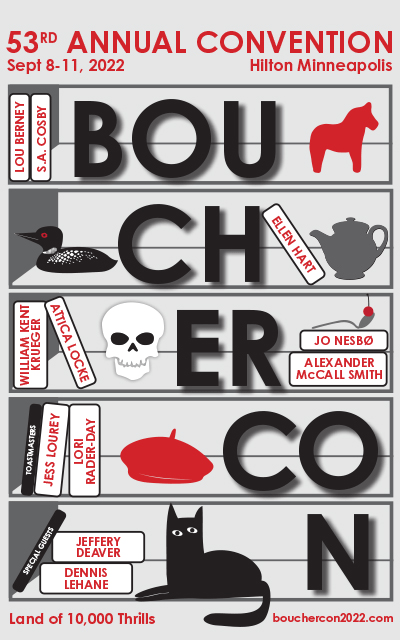 Of the writers coming to the conference, Hart says Dennis Lehane is one of her favorites. The author of “Shutter Island” and “Mystic River,” Hart says she always tries to hear him talk when he speaks publicly. “He made me want to dig deeper,” Hart says. “He made me want to be a better writer, and that is gold.” Other authors Hart recommends checking out at the convention include Jess Lourey, Mary Logue and Jesse Chandler.

Terri Bischoff, one of the co-chairs of the local organizing committee, placed a bid for Minneapolis along with the iconic Once Upon a Crime bookstore owner Devin Abraham. Previously Minneapolis had hosted the convention in 1987, and St. Paul was host in 1996.

Bischoff says the convention is often hosted in tourist destinations, like New Orleans, or San Francisco. But Minneapolis had a lot to offer as well. Held at the downtown Hilton Hotel, it’s easily accessible to the airport, with plenty of places for people to stay nearby. “It definitely helps that the Twin Cities and Minnesota in general are very literate and passionate about books,” Bischoff says. “I don’t know a lot of cities that have as many independent bookstores (as) the Twin Cities do.”

Among those stores is Uncle Edgar’s, the mystery store that burned down in the unrest of 2020 along with Uncle Hugo’s, its sci-fi counterpart. They opened back up a few weeks ago in their new location off Minnehaha Avenue on East 31st Street. They won’t have an official presence at the convention, but are a destination spot for authors in town. Author Mike Kupari will be signing books on Saturday from 2 p.m. to 3 p.m. at the store. Meanwhile, Once Upon a Crime will be hosting book signings on Thursday and Friday nights.

Bischoff, an acquiring editor for Crooked Lane Books, says she’s looking forward to the conference after years of COVID cancellations and virtual-only programming. She loves the socializing aspect, with opportunities to network with authors and agents. “But you’re always still a fan on some level,” she says. “Getting to meet your heroes who you love to read— that’s always exciting.”

As in past conventions, the 2022 World Mystery Convention is putting out an anthology, with proceeds going to charity (this year, sales benefit the Women’s Prison Book Project).

In total, there will be about 120 panels over four days, with special programming like a reception by Crime Writers of Color, highlighting writers of color and LGBTQIA2S+, a Minnesota Tea, which allows readers to mingle and sample regional taste treats with about 50 Minnesota Authors, and a debut author reception. Other highlights include the opening ceremonies, the Anthony Awards Ceremony, “Noir at the Bar” featuring writers reading from their work, an auction, panels, signings, interviews, and the Book Room, where you can load up on books to read for the coming season.

If you live in the Twin Cities and are interested in mystery books, Bischoff says it’s a great opportunity to attend because you don’t have to pay travel costs. “This conference moves around, and who knows when it will be back in the Midwest,” Bischoff says. “This is a fantastic way to stick your toes in the water and see if you like it.”