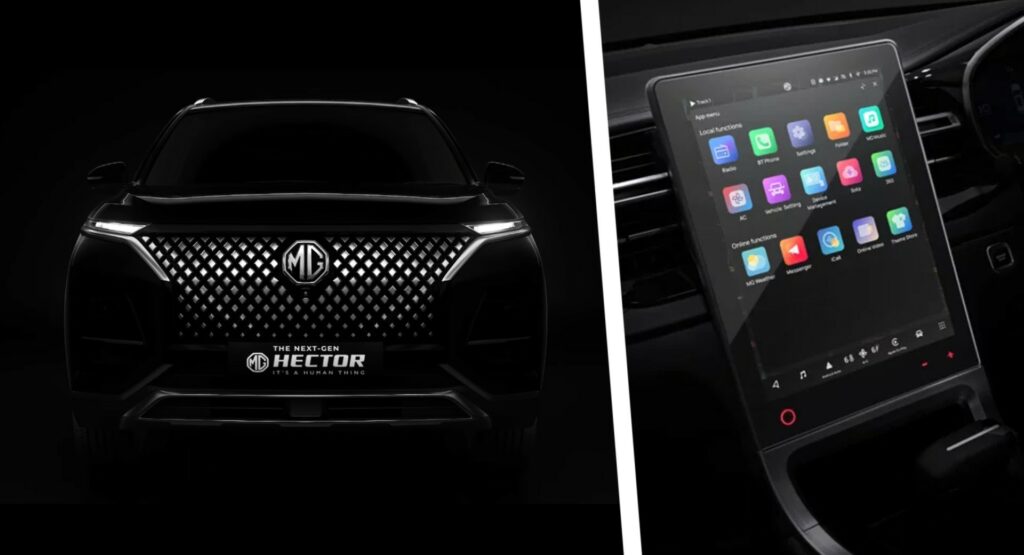 MG published a series of teasers for the upcoming facelifted Hector on its social media channels, hinting at styling and technology updates for the ICE-powered SUV that has been an India-only affair since its debut in 2019.

A shadowy video teaser reveals the redesigned face of the MG Hector which will gain a significantly larger grille with a chrome-infused pattern. The slim LED headlights appear to remain unchanged, again highlighted in chrome. The bumper sports a cleaner design with smaller intakes.

The rest of the bodywork is not expected to change much. Inside, the highlight will be the new 14-inch infotainment touchscreen. The unit retains the portrait orientation of the previous 10.4″-inch screen but it replaces the physical buttons with touch-sensitive controls. The design of the dashboard has also changed with a more inclined center console and new climate vents with glossy-black surrounds. Equipment will be enriched with more sophisticated ADAS.

As opposed to MG-branded SUVs that are currently available in other markets, the Hector is actually a badge-engineering sibling of the Baojun 530, Chevrolet Captiva, and Wuling Almaz. Everything else is expected to be carried over to the facelifted version, including the 1.5-liter petrol producing 141 hp (105 kW / 143 PS) and 2.0-liter diesel producing 168 hp (125 kW / 170 PS). Power is transmitted to the front axle through a six-speed manual gearbox or a CVT automatic. Mind you, the MG Hector is available with a mild-hybrid 1.5-liter engine in India since its debut.

Local media suggest that the updated MG Hector will be slightly more expensive than its predecessor which starts from 1,414,800 Indian Rupee ($17,794). The three-row MG Hector Plus will most likely benefit from the same updates in the near future.