The sedan landscape has changed dramatically as a number of automakers have trimmed their lineup, while Buick and Ford have exited the segment altogether.

Full-size sedans have been among the hardest hit as the Buick LaCrosse, Chevrolet Impala, Ford Taurus, Kia Cadenza, and Hyundai Azera have all fallen by the wayside. Furthermore, the Chrysler 300 is all but dead while the Nissan Maxima is selling at a fraction of its former self.

With the carpocalypse in full swing, it was little surprise when Toyota announced plans to phase out the Avalon at the end of the 2022 model year. However, the company isn’t completely throwing in the towel as the 2023 Crown will arrive this fall to effectively replace it.

Also Read: 2023 Toyota Crown Debuts In America As A Re-Imagined Full-Size Sedan For The Crossover Era

We originally saw the Crown in June and immediately had mixed feelings about it as our dreams of a sporty, rear-wheel drive sedan were quickly dashed. Combine that with a questionable two-tone paint job and we had plenty of reservations.

However, with the passage of time and repeated viewings, the initial shock has worn off. That being said, the model is a huge departure from the Avalon as Toyota reimagined the full-size sedan for the crossover era. As a result, it features crossover-inspired styling cues such as plastic body cladding and a raised ride height.

Reaction to the design has been mixed, but Toyota knew keeping the status quo was a losing battle. Consumers have been voting with their wallets and they’re overwhelmingly choosing crossovers instead of sedans. 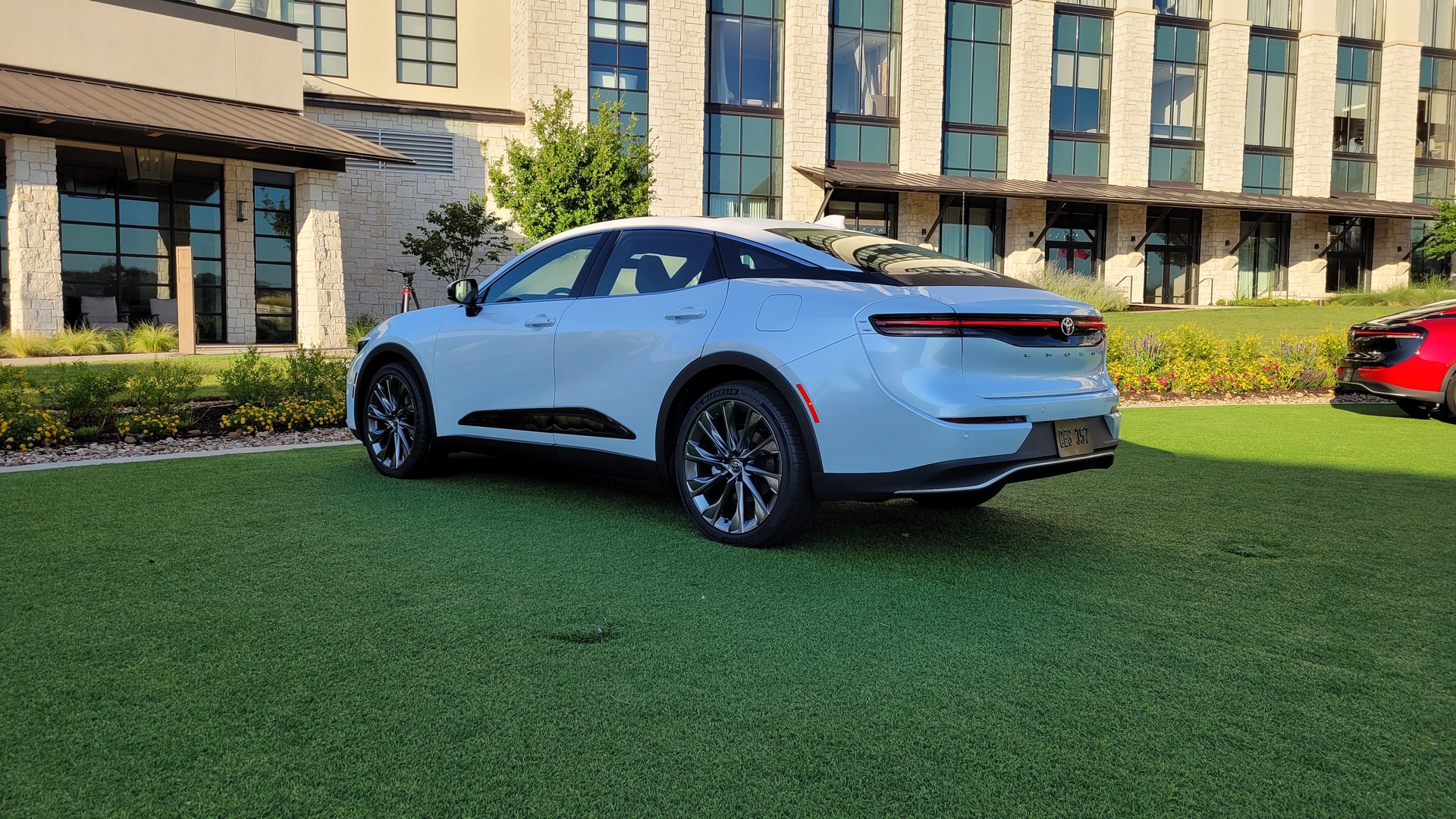 Given this, sedans have been adopting traditional crossover features such as all-wheel drive and, occasionally, plastic body cladding. If the AMC Eagle spawned the modern crossover that we know today, then it appears we have gone full circle.

Thankfully, the Crown is far removed from the old Eagle as it sports a modern design that incorporates some cues from the bZ4X. While the front end has drawn some criticism, there’s plenty to appreciate as the sedan features flowing bodywork, a graceful roof, and attractive 19- and 21-inch wheels.

Despite looking like a liftback, the Crown comes with a trunk and while it looks small from the outside, it’s downright massive when opened up. Toyota hasn’t released detailed U.S. specifications at this point, but this reviewer could easily fit inside and that’s before folding down the rear seats.

A Spacious, But Relatively Bland Cabin

The Crown will reside at the top of Toyota’s mainstream sedan lineup, but you’d be hard pressed to tell by looking at the interior. The cabin is surprisingly bland as black plastic is abound and is only broken up by the occasional silver or bronze accent. However, upgrading to the Limited trim will reward buyers with leather seats that can be had in macadamia, black and chestnut, and the traditional black you see here.

While the cabin lacks visual interest, it features a 12.3-inch digital instrument cluster and a 12.3-inch Toyota Audio Multimedia system. The latter is a huge improvement over the Avalon’s 9-inch infotainment system as it boasts better graphics as well as modern connectivity features such as cloud-based navigation, over-the-air updates, and an Intelligent Assistant that responds to the “Hey, Toyota” wake word.

The good news doesn’t end there as material quality seems above average and the model comes equipped with heated front seats that feature eight-way power adjustment as well as fabric and Softex upholstery.  The entry-level Crown XLE also comes with a dual-zone climate control system, a wireless smartphone charger, and a six-speaker audio system. 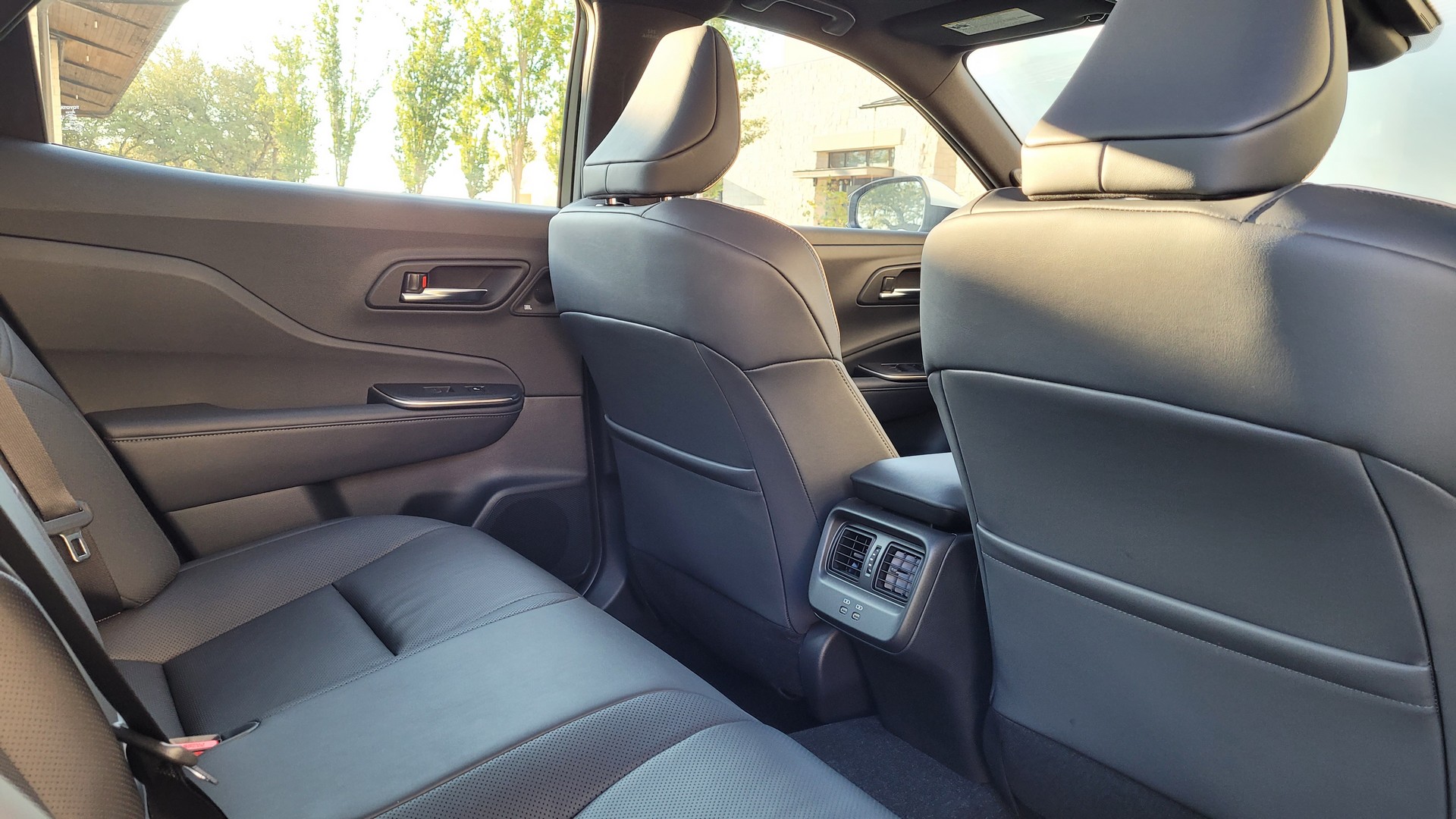 Moving up to the Limited adds comfortable, heated and ventilated leather front seats as well as heated rear seats. Other highlights include a fixed panoramic glass roof and an 11-speaker JBL premium audio system.

Speaking of the rear seats, they’re spacious but lack the limo-like legroom that was found on the Avalon. This isn’t too surprising as the Crown is 1.9 inches (48 mm) shorter and has a 0.8 inch (20 mm) smaller wheelbase. However, there was more than enough legroom for this 6’ 2” scribe and I was pleasantly surprised to find plenty of headroom as well.

Furthermore, the raised ride height helps to improve entry and egress. This is important to note as older Americans have typically embraced full-size sedans, but some have turned to crossovers as they have trouble getting in and out of cars. 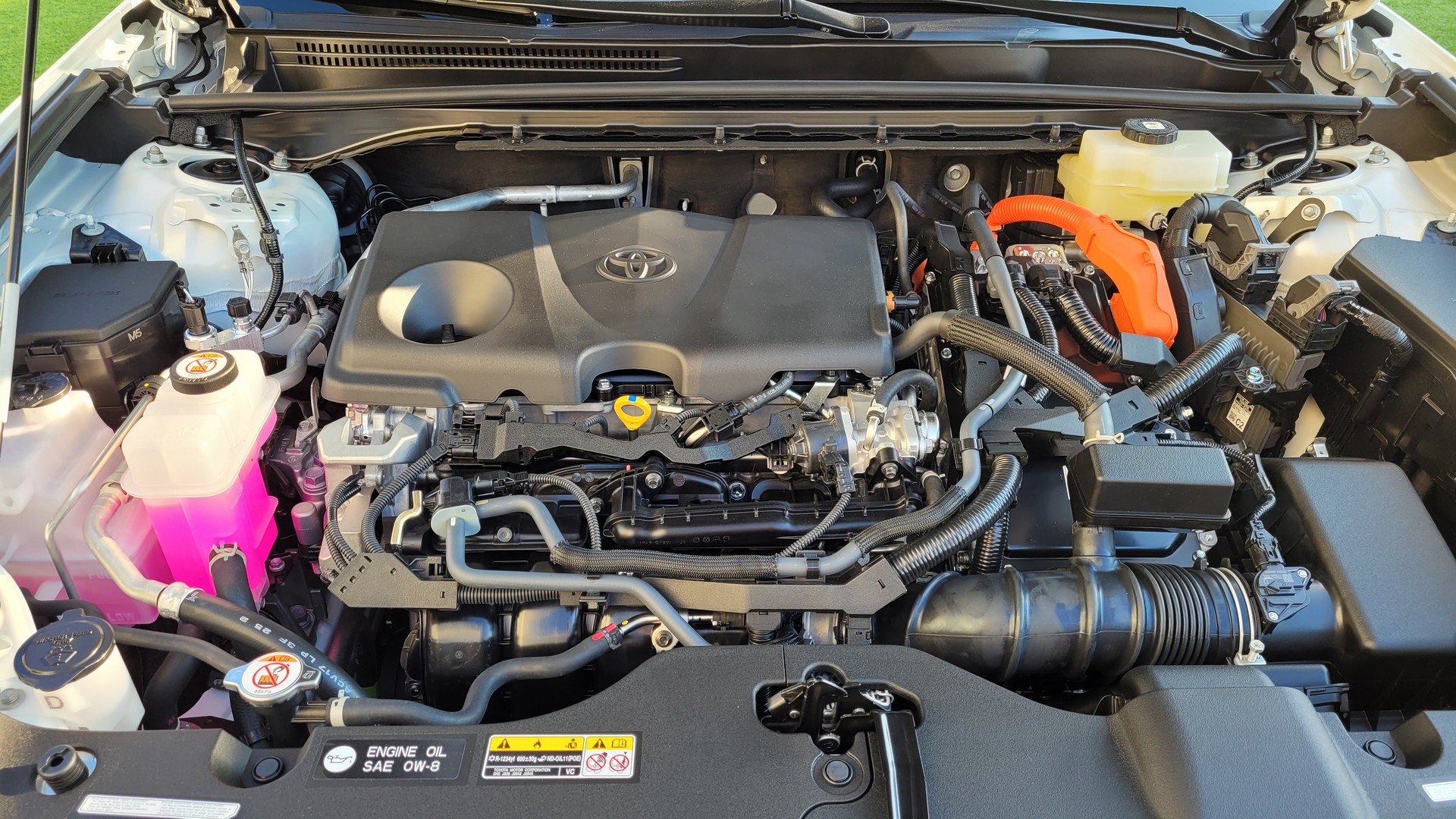 While Toyota is staying coy about a number of U.S. specifications, the company has already confirmed the model will be offered with two different hybrid powertrains.

The entry-level powertrain is found on the Crown XLE and Limited, and features a 2.5-liter four-cylinder engine, two electric motors, an electronically controlled continuously variable transmission, and a newly developed high-output bipolar nickel-metal hydride battery. The Japanese variant has a combined output of 231 hp (172 kW / 234 PS) and we can expect the US-spec model to have similar performance. Regardless of the final numbers, Toyota USA expects a fuel economy rating of 38 mpg.

However, we’re more interested in the Crown Platinum, which features an all-new Hybrid Max powertrain. It boasts a turbocharged 2.4-liter four-cylinder engine, a front electric motor that helps to maximize torque production, a rear eAxle, and a direct shift six-speed automatic transmission with a new hydraulic multi-plate wet start clutch. 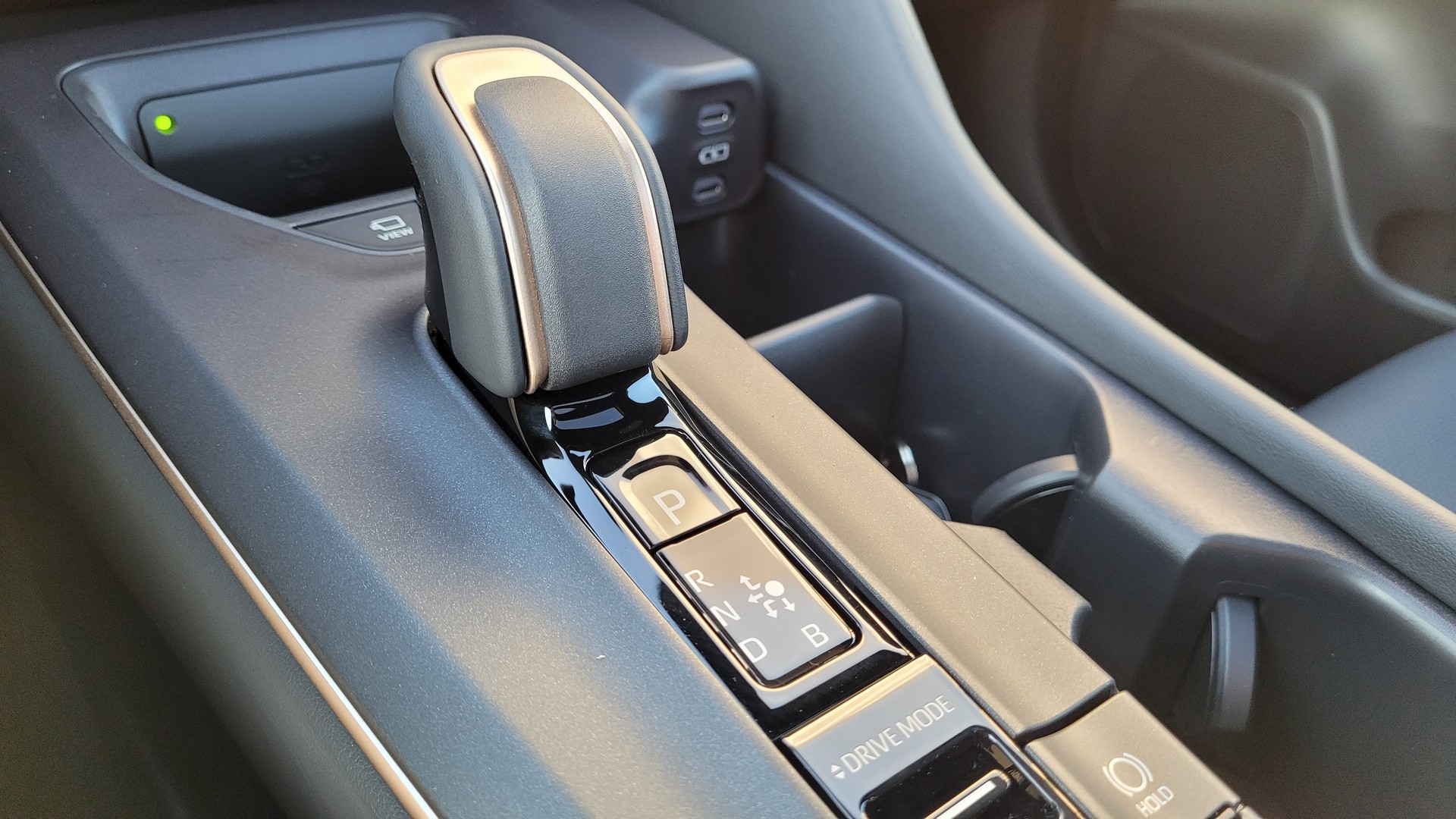 Speaking of all-wheel drive, it comes standard on the Crown. XLE and Limited variants have an E-Four AWD system with a rear-mounted electric motor that activates as needed in slippery conditions. The Crown Platinum has a fancier E-Four Advanced AWD system with a rear eAxle featuring a high output, water-cooled electric motor. The E-Four Advanced AWD system also offers front/rear power splits of between 70:30 and 20:80, which contrasts with the E-Four AWD system that can send up to 100% of its power to the front wheels.

Of course, we’ll learn more about the powertrains and all-wheel drive systems as summer gives way to fall.