The days of the Ford F-150 Lightning being a remarkable deal are over as the company is raising prices “due to significant material cost increases and other factors.” 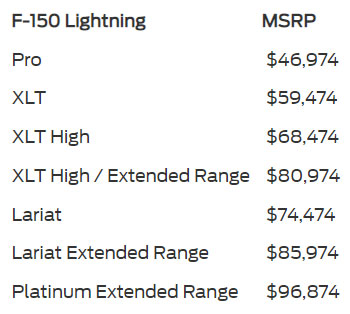 The drastic price increases – which range from $6,000 to $8,500 – are sure to disappoint, but Ford noted they’re “adjusting the MSRP on the F-150 Lightning for the first time since it was revealed in May 2021 and has honored MSRP for all customer orders to date.” Current order holders awaiting delivery are not impacted by the price increases and the company said, “Lightning reservation holders who previously received an invitation to order, but who elected to extend their reservation because their vehicle specification was unavailable, will receive a private offer for use in upcoming waves.”

The price increases were announced ahead of order banks reopening on Thursday for the next wave of reservation holders.

Putting pricing aside, Ford announced F-150 Lightnings equipped with the standard range battery will now have a targeted EPA-estimated range of 240 miles (386 km). That’s a small increase from the previous rating of 230 miles (370 km).

Other changes include the availability of Pro Trailer Hitch Assist, which controls steering, throttle and brake inputs to make hitching trailers easier. Pro Trailer Hitch Assist is now included as part of the Tow Technology Package, which is available on Pro, XLT and Lariat trims as well as standard on the Platinum and certain Lariat variants.