Restomodding, tuning, and traditional restoration projects based on classic Porsche models are a growing trend in the automotive world. The latest example is a heavily modified 1974 Porsche Carrera Targa “Safari” from Galpin, unveiled at the Werks Reunion in Monterey.

The model is based on a 1974 Porsche Carrera Targa, and more specifically the chassis 161 of the 246 models that came in the US for this specific model year. A series of modifications done by Porsche Santa Clarita (member of Galpin Motors) have transformed the Targa into an off-road ready rallycar, hence the “Safari” nametag.

See Also: The Safari Sportsman Could Be The Ultimate Porsche 911 Off-Roader 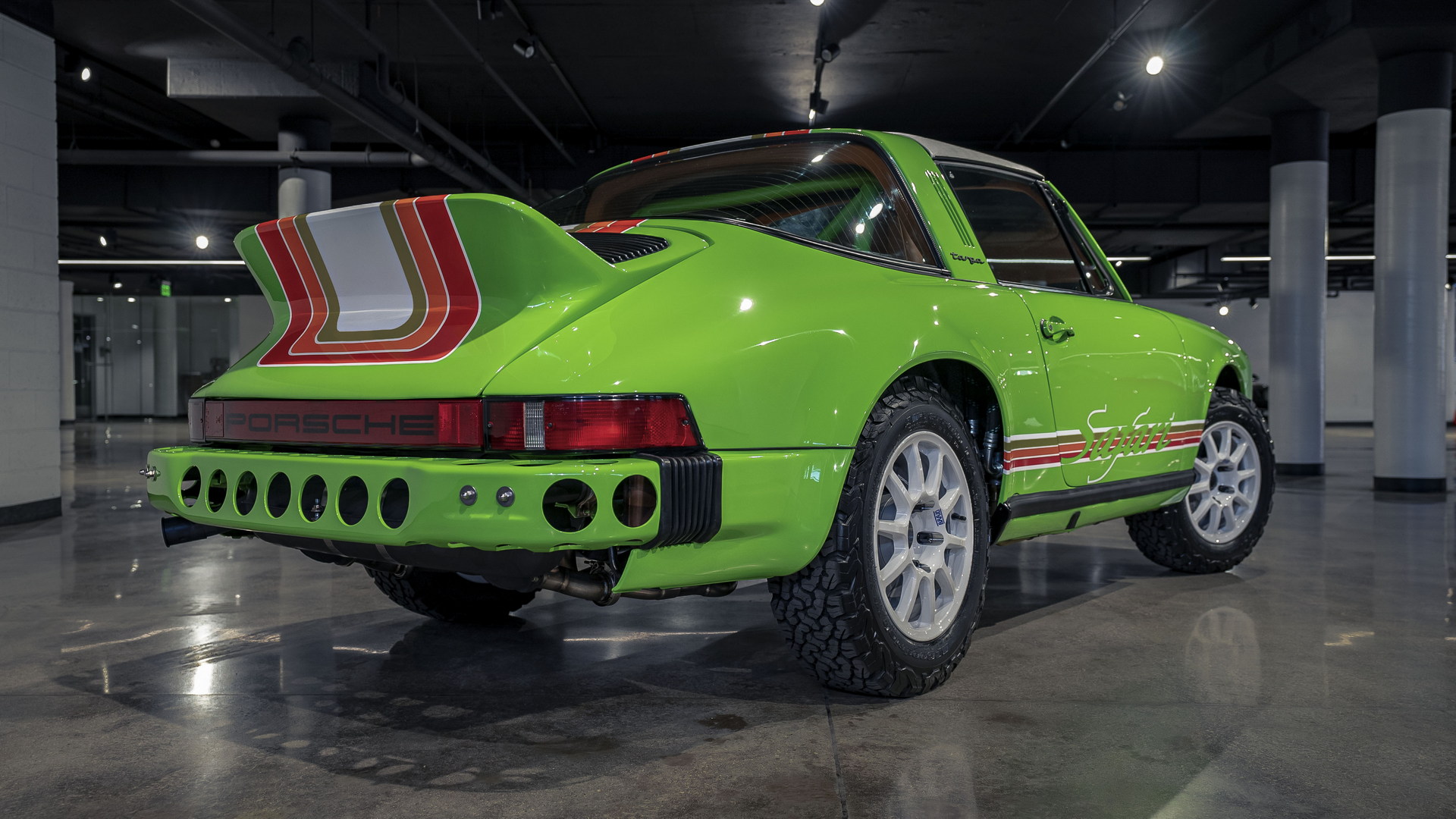 The increased ground clearance in combination with the white-painted wheels shod in grippy BFGoodrich All-Terrain T/A K02 tires, additional lights on the front,  drilled front and rear bumpers for weight-saving purposes and a ducktail spoiler from the 1973 Carrera, are more than enough to justify the rally-spec nature of the build. The targa roof of the original is retained, but the exterior has been repainted in a ’70s-inspired theme, combining an in-your-face Lime Green shade with red, orange, green, and white stripes.

The interior is almost entirely covered in orange leather with period-correct fabric inserts, while the rear-seat delete and the body-colored roll-cage add some motorsport flavor. The climate control system is revised using OEM parts, and the improved audio system is using the head unit of Porsche Classic with radio, Bluetooth connectivity, and navigation.

See Also: RUF Bergmeister Debuts At The Quail As A Hillclimb-Inspired Speedster 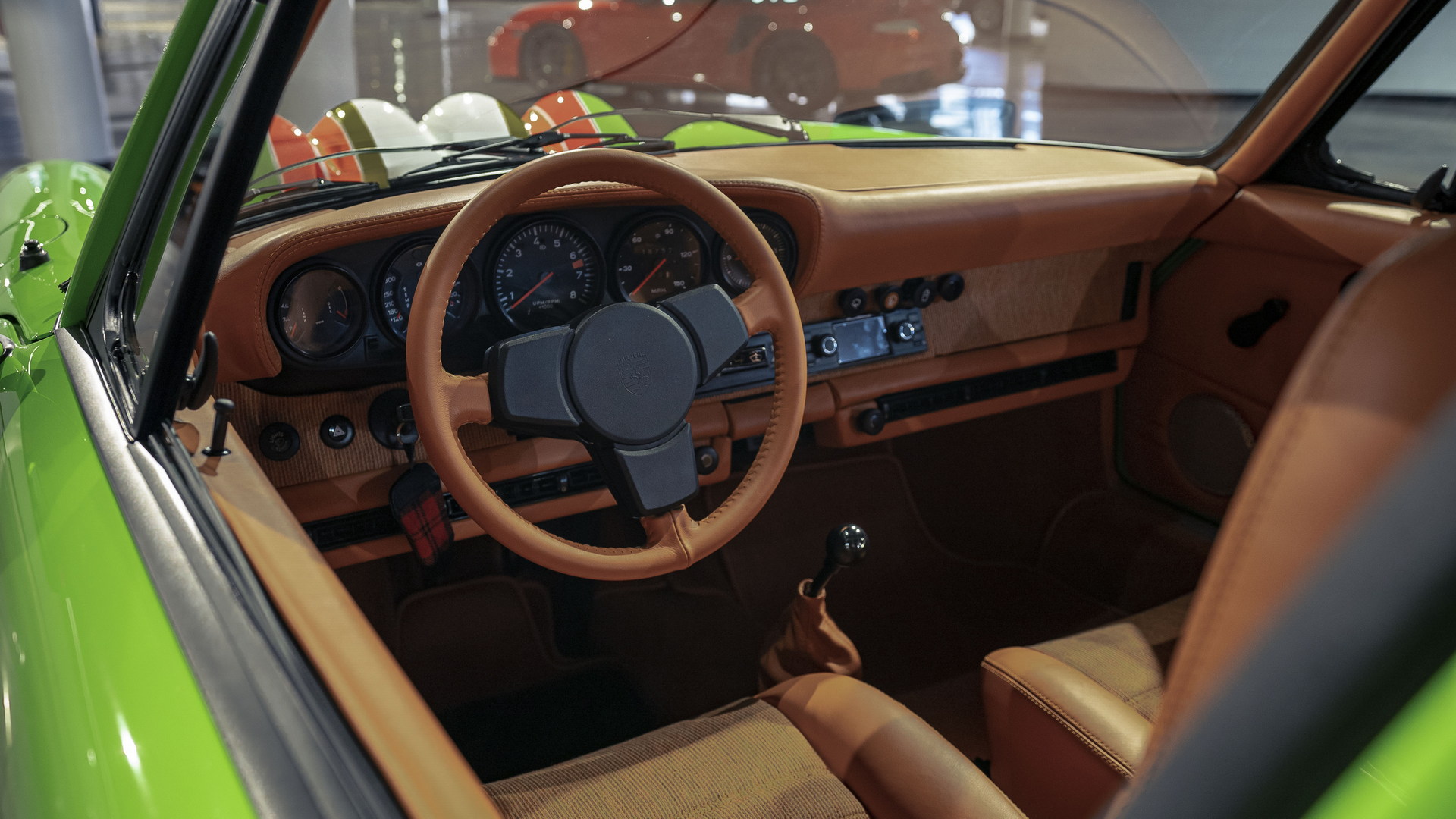 In terms of underpinnings, the rear-mounted naturally-aspirated 2.7-liter flat-six benefits from larger cylinders, and is now producing 180 hp (134 kW / 183 PS), up from the stock 173 hp (130 kW / 175 PS). More importantly, the suspension has been upgraded with a Stage 4 Elephant Racing Safari System, hollow RSR sway bars, and coilovers by MCS, so the 911 doesn’t only look tough but delivers optimum performance both on and off the beaten track. Finally, the Safari also got a new set of brakes sourced from the more modern 986 Boxster.

Speaking about the project, Beau Boeckmann, president and COO of Galpin Motors said: “Our goal with this Targa was to build something that was modified like it might be in period, inspired by the Safari Porsches that raced in East Africa in 1973, all while paying homage to Galpin’s history in off-roading and racing. We can’t wait to spend some time in the dirt with it”.

The  one-off vehicle was showcased at Werks Reunion as part of the Porsche Classic Restoration Challenge. Galpin hasn’t shared pricing, but the donor car had an estimated value of $125,000 back in 2017 when it was auctioned by Mecum.