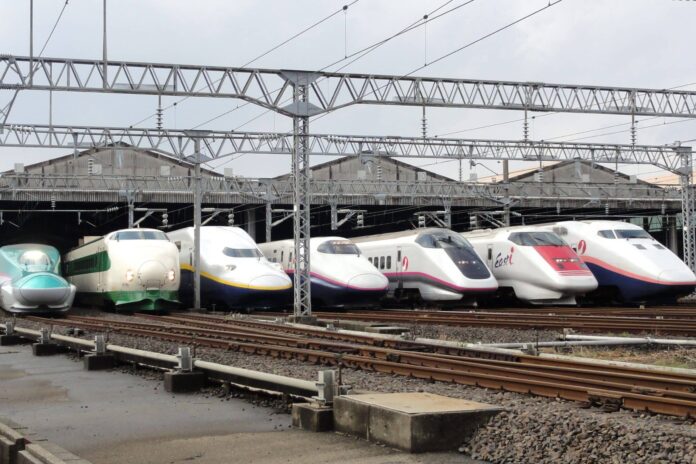 With Japan once again open to tourists, now is a great time to lock in your flights and begin to plan your Japanese adventure.

Japan has one of the best railway networks in the world, and at the heart of that system is the Japan Railways Group, or JR Group. For tourists, the JR Group offers the Japan Rail Pass, which lets you easily explore the entirety of Japan’s rich culture and landscape with a single pass.

In this guide, we’ll go over everything you need to know about the Japan Rail Pass, including eligibility requirements, transportation options, and routes available to pass holders.

Most importantly, we’ll also explore if it’s worth it for you to buy a Japan Rail Pass for your next trip to Japan.

What Is the Japan Rail Pass?

The Japan Rail Pass, often referred to as the JR Pass, is an unlimited-use ticket to Japan’s extensive transportation system. With a Japan Rail Pass, you can easily get across the country by train, bus, and ferry, as well as access to the Tokyo Monorail.

Reserved exclusively for tourists, the Japan Rail Pass is a product offered by six companies that make up the Japan Railways Group. The JR transportation network is quite extensive, covering almost all of the country. Therefore, having a JR Pass can save you a fair amount of money if you’re planning on using the JR Group’s services frequently during your trip.

Who Is Eligible for the Japan Rail Pass?

The JR Pass is a product that’s explicitly designed for tourists, and is off-limits to domestic Japanese residents. To be eligible for a pass, you must meet one of two conditions:

If you’re purchasing a JR Pass as a foreign tourist, you must have the specific “temporary visitor” stamp in your passport. This is a very important step, and if you’re travelling to Japan on another visa, and don’t have this specific passport stamp, you’ll be denied a JR Pass when you attempt to pick it up.

It’s important to note that if you arrive in Japan and use an automated gate at the airport, you will not receive the necessary entry stamp. You’d therefore need to go to a manned checkpoint, or ask a clerk to apply the stamp after the fact.

Japanese citizens who are living abroad must have lived in another country for at least 10 consecutive years to be eligible for a Japan Rail Pass, with written proof required from the embassy or legation of Japan in the foreign country where they live.

How to Purchase a Japan Rail Pass

The most common and easiest way to purchase your JR Pass is online, before arriving in Japan. The JR Pass is sold via travel agencies, and therefore, the price can vary quite a bit.

Even though you may purchase your JR Pass before travelling to Japan online or at an overseas agent, you won’t actually receive your JR Pass right away. Instead, you’ll get a JR Pass Exchange Order Voucher.

You’ll have to bring this voucher with you, and hand it in directly at one of many designated ticket offices. Along with the voucher, be sure to bring your passport with the specific temporary visitor stamp, or your proof of living abroad if you’re a Japanese passport holder.

The Exchange Order Voucher must be exchanged for a JR Pass within three months of the date it was issued. So if you’re planning to travel to Japan for, say, cherry blossom season in March 2023, you’ll want to purchase your JR Pass no earlier than December 2022.

If you’ve already arrived in Japan and haven’t purchased your JR Pass yet, you’re not completely out of luck, as there are also JR Pass offices in Japan.

However, only foreign passport holders can purchase a JR Pass while in Japan, and the cost for a JR Pass purchased in Japan is more expensive than if you were to book it before arriving.

Which Japan Rail Pass Should You Choose?

When purchasing your JR Pass, there are two types of JR Passes: the Green Class Pass or the Ordinary Class Pass.

The Green Class Pass provides you access to the upgraded, more luxurious Green Class train cabin, and costs over 30% more than the Ordinary Class Pass.

While the Green Class Pass will grant you access to the upgraded Green Class, it’s not quite the same as comparing First Class airline seats to economy class seats. In Japan, the Ordinary Class is still fairly clean and comfortable, and will be suitable for most travellers.

Green Class will most likely be slightly less noisy, and may be a better option if you need to get work done during your journey. You’ll also enjoy slightly more leg room.

If you do buy the Green Class Pass, you’ll need to reserve your seat in advance in order to sit in the Green Class cabin. Although the advanced reservation won’t cost you anything, it still may take away some of the flexibility, as Ordinary Class Pass holders can simply walk up to the gate, scan their pass, and board the train.

After you’ve decided on your type of pass, you’ll have to choose your pass duration. There are only three options: a 7-day, 14-day, or 21-day JR Pass.

The number of days you choose for your JR Pass will begin on the calendar date that the pass is first used. The durations are counted by calendar days, not by 24-hour periods.

Lastly, if you have children who are aged 6 through 11, you can purchase a child JR Pass, which is 50% of the adult pass.

As mentioned previously, the exact price of your JR Pass may vary depending on what travel agency you buy it from, or if you buy it before or after you arrive to Japan. Generally speaking, the prices, in Canadian dollars, for an Ordinary Adult JR Pass will be around the following:

If you’re splurging on the Green Class JR Pass, depending on where it is bought from, it will cost around the following per adult:

As you can see, the best value comes from purchasing the 21-day JR Pass; however, exactly how much value you get out of the pass will always come down to how much you actually use it.

Is It Worth It to Buy the Japan Rail Pass?

When you buy your JR Pass, you’ll want to be mindful of any potential delivery fees, shipping fees, and other fees.

For example, on my September 2022 Japan trip, I used a Japan Rail Pass calculator tool to add up the individual price for each ticket for my planned train route of Tokyo–Kyoto–Nara–Osaka–Tokyo (effectively a round-trip on the Shinkansen between Tokyo and the Kansai region).

By doing so, I realized that the individual tickets would be just about breakeven with the cost of JR Pass, and it’d actually be cheaper to buy tickets individually after factoring in extra delivery and shipping fees of the JR Pass. Indeed, keep in mind that the JR Pass is a commissionable product sold by travel agencies, and therefore it can sometimes be  overhyped as an option compared to simply buying your own train tickets – which is generally a very straightforward process at Japanese train stations.

You should always do the math and plan out your own journey to make sure that a JR Pass makes sense, especially if you aren’t planning on travelling around the entirety of the country.

In general, I’d estimate that a round-trip between Tokyo and the Kansai region – which is a common itinerary for a first-time visitor –just about breaks even with the cost of a seven-day pass. If you’re travelling further afield in Japan over a longer period, then a JR Pass purchase could certainly pay off.

Meanwhile, if you’re going to be staying in a specific region of Japan rather than the whole country, you can look into buying a pass that will allow you to travel around a more localized area.

The JR Group also offers regional passes for shorter durations of days. These passes are valid for travel within the following regions:

Japan’s transportation network is quite extensive, and covers a majority of the country. With the JR Pass, you’ll have access to a wide range of railways, buses, and ferries.

You’ll have access to all JR Group Railways and Shinkansen bullet trains, with the important exception of any reserved or non-reserved seats on the fastest Nozomi and Mizuho Shinkansen trains.

However, you will have access to the Hikari Shinkansen trains, which are only slightly less fast, taking about 30 minutes longer on the common Tokyo–Osaka route.

You’ll also be able to travel on limited express trains, other express trains, some rapid or local trains, the Tokyo Monorail, and the  Tokyo BRT bus services, with some exceptions.

For example, the Yamanote Line in Tokyo and the Osaka Loop Line are both operated by Japan Railways, so you’ll be able to get around on these circular urban metro lines as a JR Pass holder without paying extra fares.

In addition to railways, the JR Group also operates JR Buses. JR Pass holders will have access to a number of bus lines, including:

The only exception here is that the JR Pass is not valid for travel on express JR Bus routes.

Lastly, there is only one ferry service available if you have a JR Pass, and that’s the JR-West Miyajima ferry. It travels between the Miyajima Ferry terminal and the JR Miyajimaguchi pier just outside Hiroshima in the western part of Japan.

Other Things You Should Know

Similar to with airlines, there are restrictions to the amount of baggage you can bring on certain routes. Essentially, if you’re over the limit, you may need to make an advance reservation for a designated seat and a spot in the baggage area.

There are also coin-operated lockers available in most railway stations, where you can store your belongings if you want to travel lighter.

Free Wi-Fi is available at almost all stations and on certain trains. This is a great aid for staying productive along the rail journey, or to make planning the next part of your Japan trip easier.

Japan as a country is relatively small, with a highly dense population. This means that traffic on trains can be quite heavy. I’d certainly expect this trend to continue as the country reopens and more tourists arrive.

You’ll definitely want to be mindful of rush hour times, and you should consider avoiding travelling during the morning and evening rush hours in major cities – usually between 7:30–9:30am and 5–8pm.

As international travel to Japan resumes, this is a very exciting time to book flights and plan out your trip. No trip to Japan would be complete without experiencing Japan’s state-of-the-art railway network, which is one of the best ways to travel around the country.

On one hand, the Japan Rail Pass is an amazing tool that unlocks most of the country and gives you unlimited access to a fair number of transportation options for a fixed price.

On the other hand, the pass can still be a costly purchase, and you may be better served by purchasing individual tickets, or shorter and cheaper passes designed for specific regions, depending on how you’d like to allocate your time in Japan and which destinations you want to visit.

Be sure to use a Japan Rail Pass calculator to map out your journey and figure out which option is best for you before making your purchase.