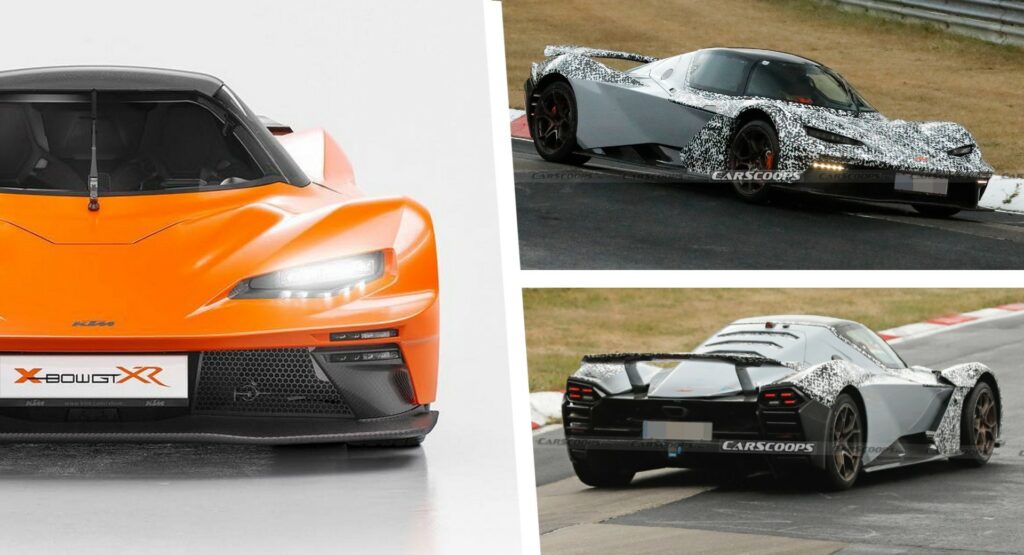 KTM is getting ready to unveil the new X-Bow GT-XR which is the road-going version of the GTX and GT2 racecars. Our spy photographers caught the track-focused sports car during the last leg of development at the Nurburgring, wearing less camouflage than before. At the same time, Reiter Engineering published the first official teaser, revealing the design of the front end and confirming the GT-XR name.

The lightweight rear-wheel-drive vehicle looks planted on the track, with minimum suspension travel. Note that this is the second time we see a prototype of the road-going X-Bow GT-XR, after spotting it during the winter testing session last February. 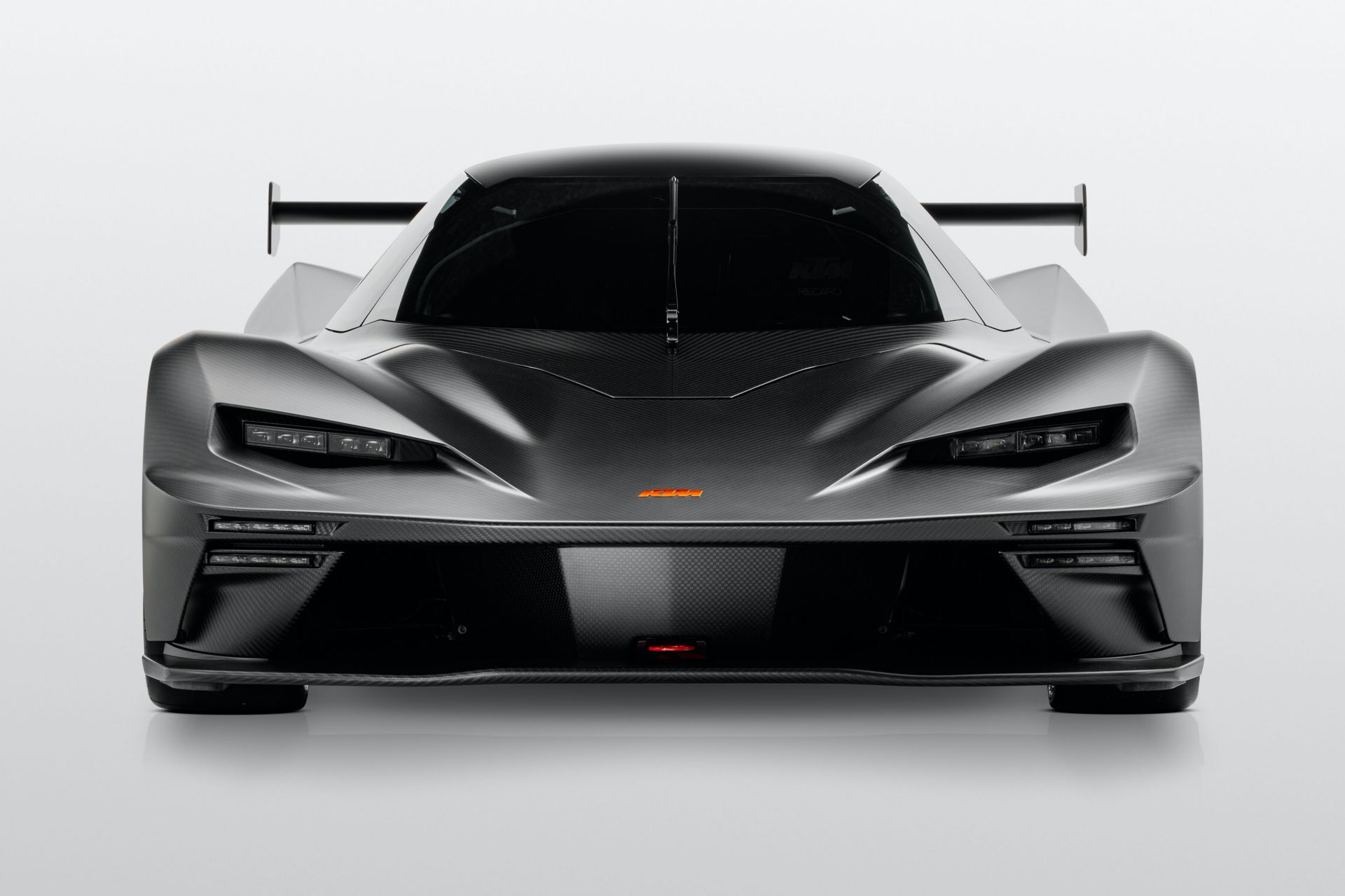 Interestingly, the bodywork of the GT-XR appears to be carried over from the GTX. Even the pronounced front splitter is retained. KTM made some room for the license plate between the bumper intakes, which got a new honeycomb pattern. The LED headlights could also be slightly different in order to comply with safety regulations.

The biggest difference in the design is the new active rear spoiler which replaces the massive swan-neck wing of the track-only GTX / GT2 variants. While smaller in size, it will produce enough downforce not only for the road but also for the track since most of the owners will probably enjoy it on track days. Another predictable change is the new set of wheels, with gold-finished five-spoke rims shod in road-legal tires. 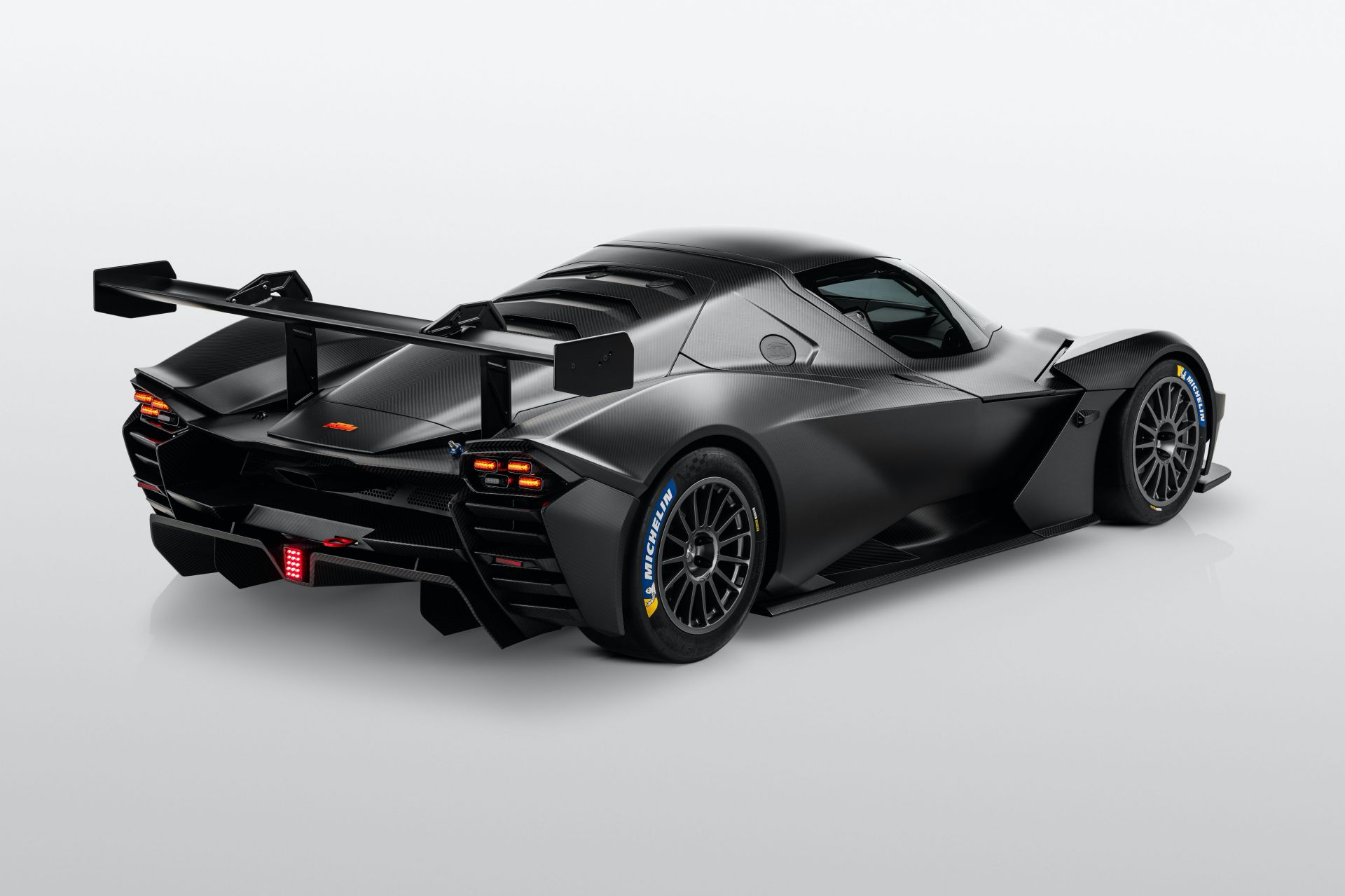 As for the powertrain, the Audi RS3-sourced turbocharged 2.5-liter five-cylinder engine is expected to be carried over. What we don’t know for sure is the state of tuning it will receive in the GT-XR. Currently, the ABT-tuned motor produces 523 hp (390 kW / 530 PS) in the GTX and 600 hp (447 kW / 608 PS) in the GT2 racer. In any case, power will be transmitted to the rear axle through a seven-speed sequential gearbox and a limited-slip differential, while the suspension will receive new tuning making it better suited for public roads.

Rivals of the KTM X-Bow GT-XR that are already offered for sale include the Radical Rapture, the Dallara Stradale, the BAC Mono, the Caterham 620R, and the Donkervoort D8 GTO. Pricing is expected to be steep, not far from the track-only X-Bow GTX which starts from €230,000 ($234,000) before taxes.