This story contains independent renderings created by Hussain Albagali based on the Land Rover Defender that are neither related to nor endorsed by Jaguar Land Rover.

The Land Rover Defender is the latest off-roader to join the 6×6 trend, at least in digital form. The fictional Defender-based concept nicknamed “UK Bastard” was created by independent designer Hussain Albagali, and besides being a six-wheeler with a rear bed, it is also envisioned with a fully electric powertrain.

The six massive wheels and the increased ground clearance make the Defender look like a vehicle for the post-apocalyptic future. Hussain Albagali also added a rear bed, converting the SUV into a double-cab pickup. The 3D model looks like it was based on the Defender 110 instead of the longer Defender 130, but this detail doesn’t really matter as the “UK Bastard” is significantly longer than any factory-spec variant. 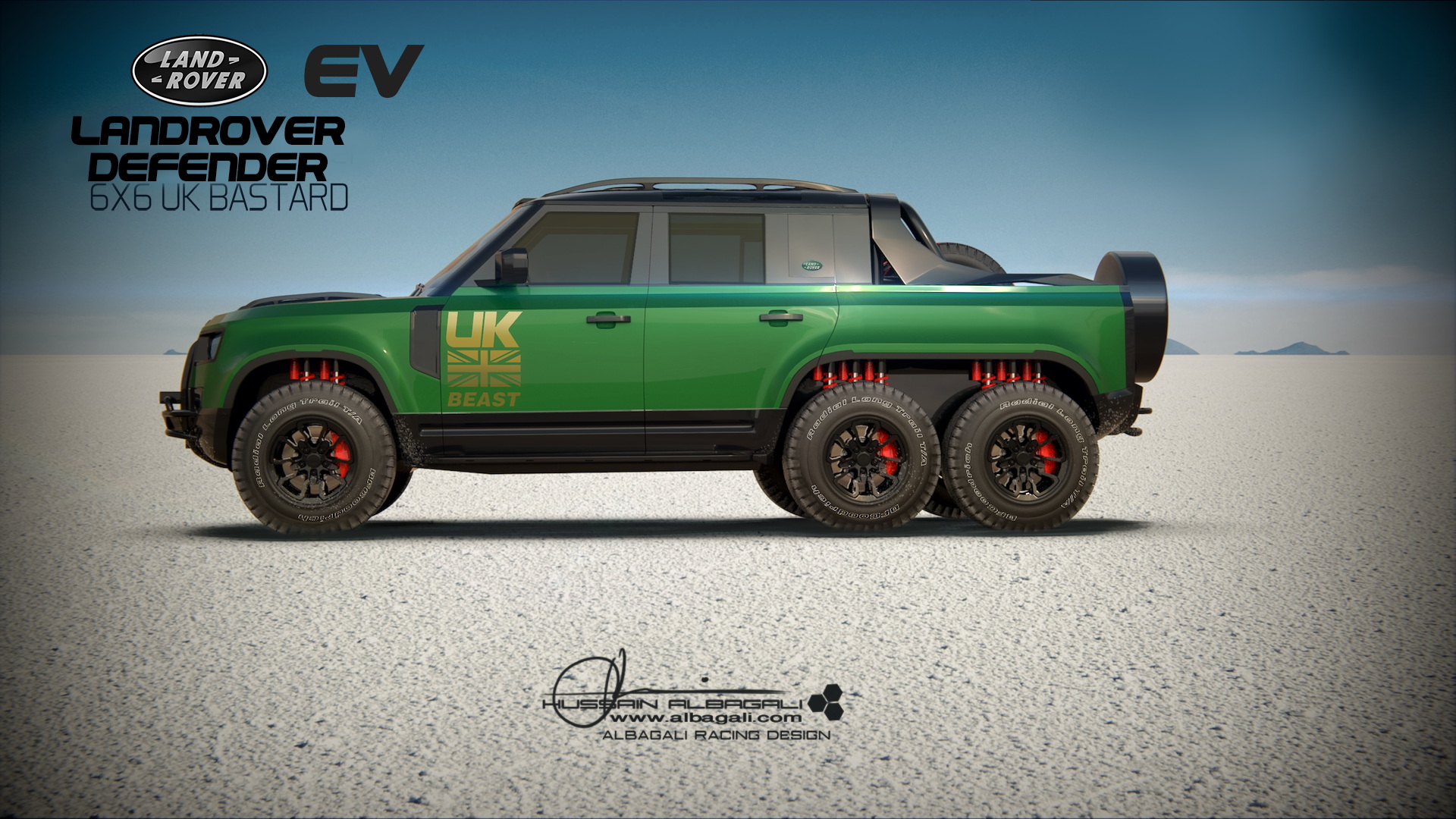 The EV nature of the build is evident from the grille and the bumper intakes that are fully covered, plus the absence of tailpipes. Other styling touches include the metal bullbar and the extra LEDs at the front, the rugged bonnet, the illuminated side steps, the custom roof rails, and the bespoke rear bed. Interestingly, the model is loaded with three full-size spare tires at the back, meaning that you’ll be fine even if half of the tires get punctured on an off-road course.

According to the creator, the fully electric Defender 6×6 UK Bastard was envisioned to produce as much as 1,400 hp and 15,500 Nm (11,432 lb-ft) of torque, allowing a 0-60 mph (0-97 km/h) acceleration in 6 seconds. The rear suspension will make sure everyone remains comfortable in any kind of terrain, while the instant torque of the electric motors would be beneficial in challenging conditions. What is not clear is the kind of battery pack needed to provide a sufficient range in such a heavyweight vehicle.

The classic Defender has already been converted into a six-wheeled monster, known as the Flying Huntsman 6×6 by Kahn, but no tuner has done something similar to the new generation. While Hussain Albagali’s concept will remain in the digital world, it will be interesting to see whether a similar kind of bodystyle will come to life in the future. Mind you, Albagali is the designer of the bespoke Ram-based Ford Mustang Convertible off-roader created a few years back for a Sheikh.

H/T to Hussain Albagali for sharing his project with us