Lincoln today took the wraps off the Model L100 Concept, an all-electric, completely autonomous concept car that looks into the future, while honoring the brand’s history.

Unveiled as part of the Monterey Car Week, it will take part in the Pebble Beach Concours d’Elegance later this week, which is celebrating the brand’s 100th birthday. Indeed, the automaker says that the concept was inspired by the 1922 Lincoln Model L, which was, at the time, a highly regarded engineering showpiece for the brand.

“We are at a special moment in our history. Over the last 100 years, Lincoln has pioneered multiple innovations and pushed the boundaries of design that have come to define our brand as we know and love it today,” said Joy Falotico, president, Lincoln. “With the Model L100 Concept, we reimagine what the Lincoln sanctuary can look like for our clients of tomorrow and take a big step toward our next chapter.”

Lincoln conceives its future as an elegant time, and this design has been imagined to convey that. A crystal greyhound acts as a hood ornament, though it’s contained within the glass hood, as a nod to its 100-year-old forebear. The coupe body style, meanwhile, cuts through the air with its “K-tail” and its long, low proportions. The body is nearly seamless, too, because everything from the A-pillars back opens.

With the doors spreading like a ladybug’s shell, and the roof popping up as well, the Model L100 Concept it supposed to give a “true sense of ceremony” when you walk up to it. And that sense of pomp goes beyond the extravagant doors.

Lincoln uses lighting cues to welcome the occupants in with an “orchestrated symphony of lights” both inside and out. The lighting can also follow humans around the vehicle to curate an experience specifically to them. It’s also useful, containing information about the battery’s state of charge.

Once inside, occupants are greeted by a vegan interior that is made up of warm, soft white seating materials, accented by amethyst recycled suede. The exterior color was achieved using metallic paint and a ceramic tri-coat with frosted acrylic accents in lieu of chrome. 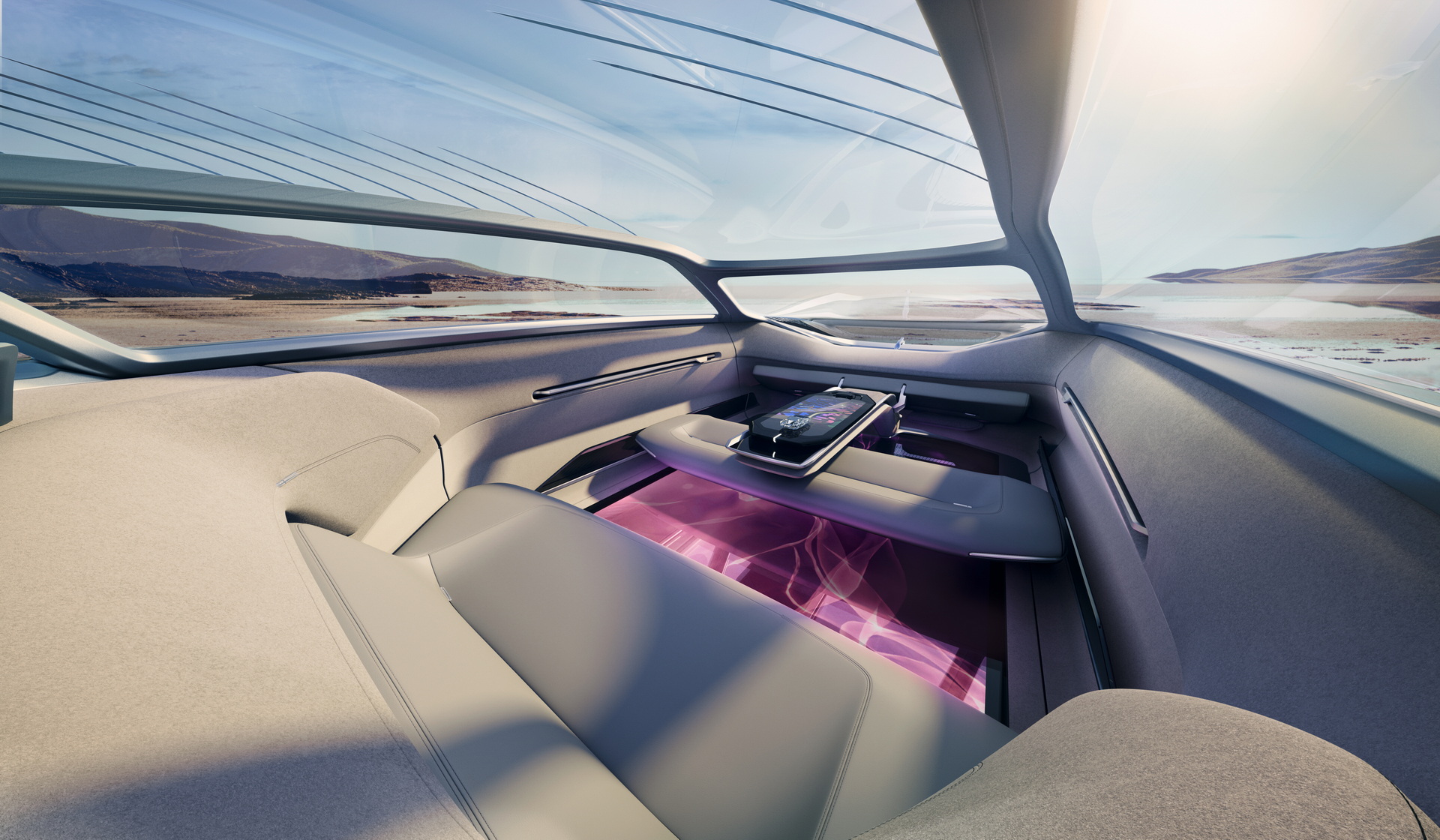 Spatially, the interior has been designed to take advantage of the concept’s autonomous and electric technology. The vehicle is operated with a jewel-inspired “chess piece controller” instead of steering wheel or pedals

The seating, meanwhile, can be configured to have all seats facing forward or each other, for a more social atmosphere. A simple folding front seat enables that transformation, while the flat, illuminated floor takes advantage of the lack of powertrain components cluttering the passenger cabin.

Lincoln doesn’t go into detail about the powertrain, but says that the Model L100 uses next-generation battery cell and pack technologies that will deliver “game changing energy density.” It is treating the whole vehicle as a system, it says, by integrating the batteries into the structure of the vehicle, thereby enabling greater efficiency. 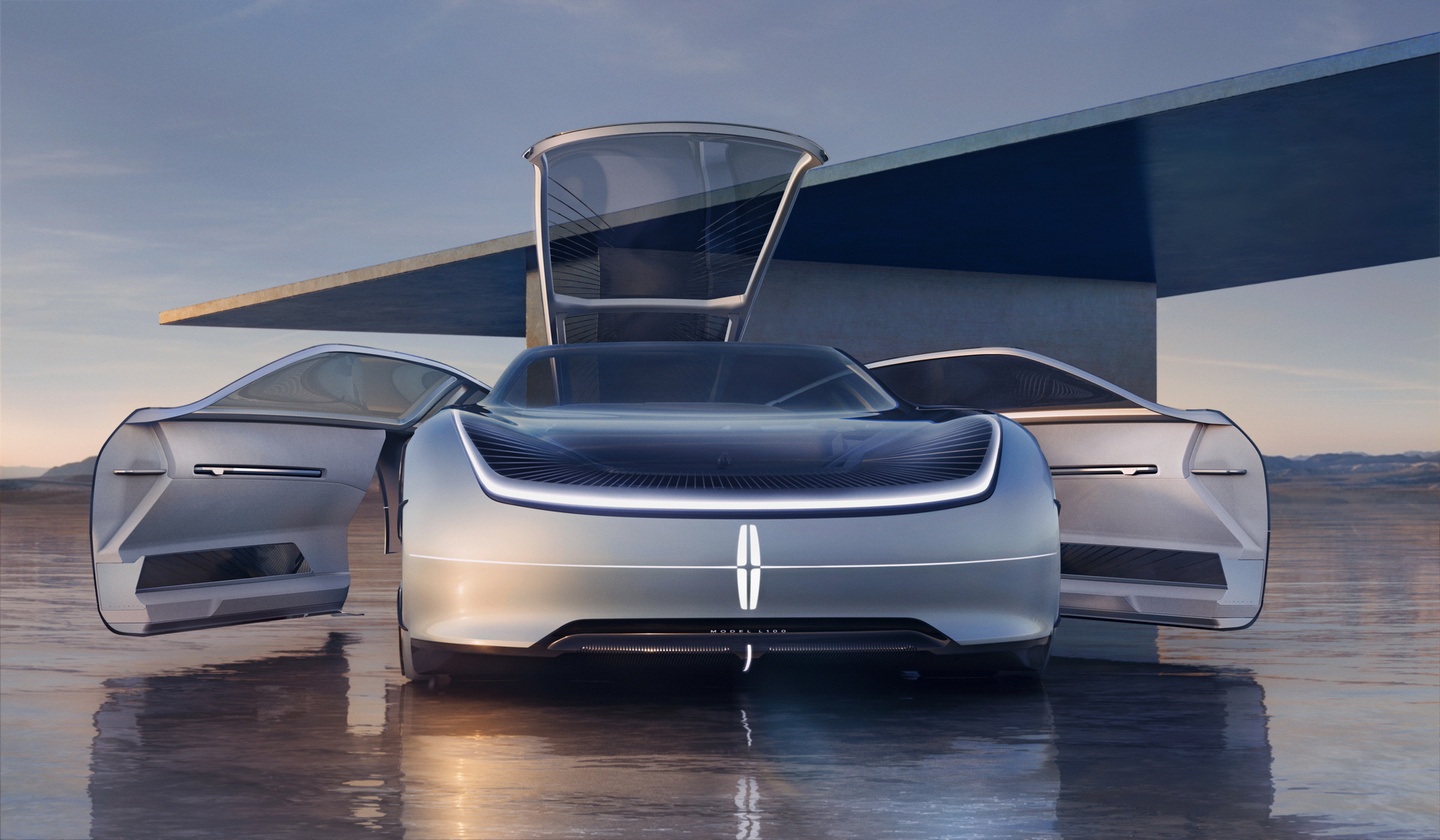 “This concept allowed us to design a new experience that is unburdened by past limitations and represents an evolution of our Quiet Flight tenets,” said Kemal Curic, global design director, Lincoln.“The ultimate expression of our Model L100 design is one that moves effortlessly–a vehicle that appears to be sculpted by the wind, as if friction does not exist.”

A followup to the brand’s Star Concept SUV, the Model L100 Concept is the latest indication as to Lincoln’s design intentions for its electric era. Promising several EVs on the road by 2025, the brand is working to take its next step into the future.