Luckily There Was A Dent Guy Around, Should Be Fixed In An Hour 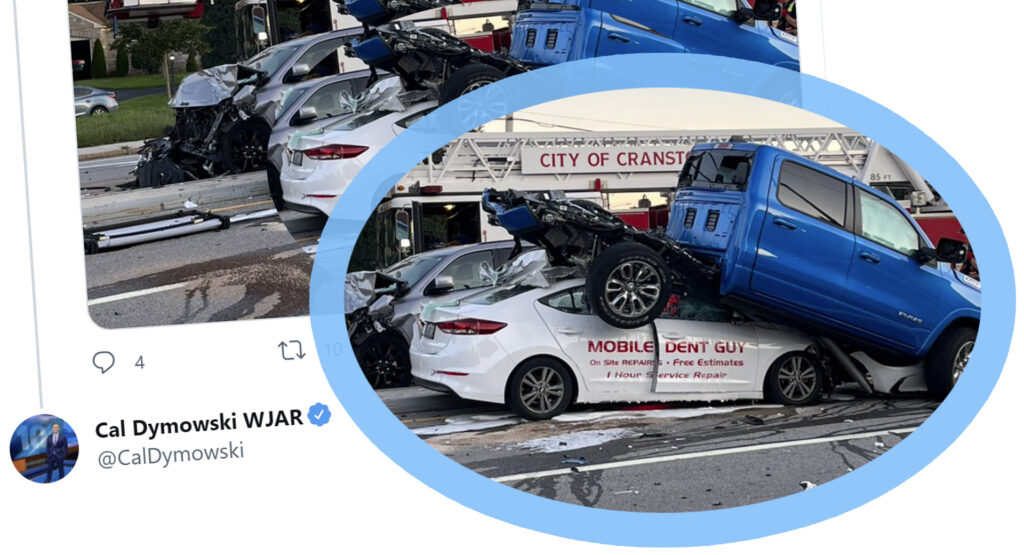 Three vehicles were involved in a bizarre accident on Reservoir Avenue in Cranston, Rhode Island, on Thursday, September 15.

Four people were injured in the incident and sent to hospital. Three were released shortly after arriving and being treated, according to WJAR NBC 10, but one person remained in hospital with a broken leg.

The accident occurred at the intersection of Reservoir Avenue and Woodbridge Road. Police said that the RAM truck crashed into a vehicle, which appears to be a Jeep Grand Cherokee, and went airborne before landing on a Hyundai Elantra that, ironically, features an ad for the “Mobile Dent Guy.”

Read Also: Car Hauler Gets T-Boned By Train In Texas

Unbelievable even here in Reservoir Avenue in Cranston. This is right by Garden City.

I was on my way home when I ran across this. @NBC10 pic.twitter.com/Ajylk4HOyG

The crash was violent enough to detach the bed of the Ram from the rest of the vehicle. First responders were forced to use the jaws of life on the truck to access the battery, which was leaking fluid. Gas could also be seen on the road, and foam was used to limit the risk of fire.

Police said that crews will use traffic reconstruction and BCI to investigate the crash, and added that the driver of the one of the vehicles will potentially be charged with moving violations based on its investigation so far and witness reports.

“Safe to say speed is involved, but cause is under investigation,” police told WJAR NBC 10.

Police tell me 4 people were taken to RIH. Extent unknown at this time. That white liquid you see is foam to sit on top of gasoline.

@Cranstonpolice told me first responders used the jaws of life to gain access to the blue vehicle’s battery because it was leaking fluid @NBC10 pic.twitter.com/WdxYcTC3HU

A portion of the road was closed following the accident as crews assisted on the scene. According to Cal Dymowski, a reporter who happened to run across the accident on his way home taking the shots you see on his twitter account, street signs were taken down by the vehicles in the accident. A YouTube user also captured the aftermath.