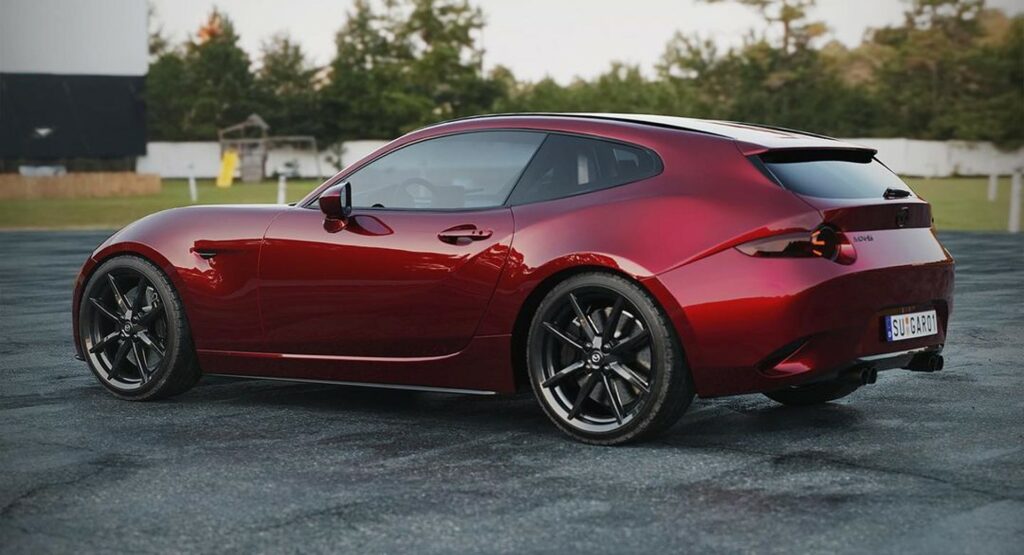 This story includes a speculative rendering for a fictional Mazda MX-5 Shooting Brake created by Sugar Chow that is not related to nor endorsed by Mazda.

The Mazda MX-5 is one of the most fun-to-drive RWD cars in the market, especially in its price range. Mazda is offering two different bodystyles including the soft-top cabrio and the hard-top RF, but independent digital artist Sugar Chow envisioned the sportscar in the form of a shooting brake, adding more practicality into the mix.

The first-ever three-door MX-5 only exists in the digital world, but a set of realistic renderings make it quite believable. The model retains the underpinnings and most of the body panels of the roadster, but the upper half and the tail are completely redesigned.

The A-pillars are better integrated with the fixed roof that has a small incline towards the back. This drastically changes the proportions of the sportscar putting greater emphasis on the rear axle. The muscular rear fenders are now connected to the C-pillars which follow the shape of the revised windowline. Due to the compact footprint of the MX-5, it is highly unlikely that anyone could fit at the back, so we guess that the shooting brake retains the original two-seater configuration of the roadster.

More importantly, the rear end got a tiny window and an equally small hatchback, providing access to the enlarged boot. The regular MX-5 has a laughable cargo capacity of 120 lt (4.2 cubic feet) but this number would be significantly improved in a shooting brake variant thanks to the extra height and the absence of the retractable roof mechanism. Sugar Chow also added a very small rear spoiler, aftermarket LED tailights, and quad tailpipes on the stock diffuser for an even sportier stance.

While such a vehicle would never get the green light for production, one thing is for certain: the fictional Mazda MX-5 Shooting Brake makes the perfect competitor for the also fictional Toyota GR86 Shooting Brake recently created by the same artist. In the highly unlikely scenario that those models were offered in real life, which one would you choose?