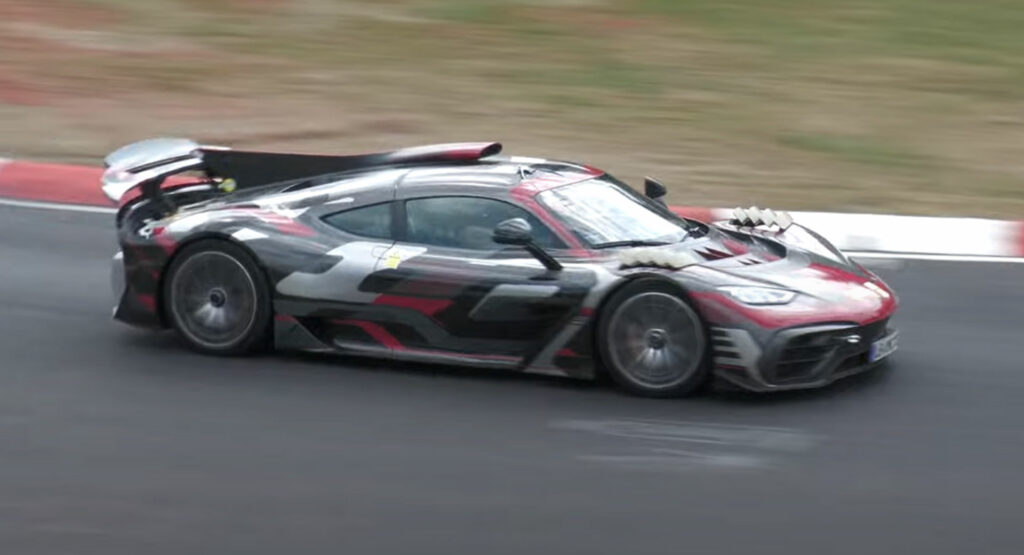 A prototype of the ferocious Mercedes-AMG One has been filmed being put through its paces at the Nurburgring as the German automaker reportedly gets ready to chase after the production car lap record.

Mercedes-AMG only unveiled the production-ready One in late May after years of delays and it’s clearly eager to show the world just what it is capable of. It is understood that this prototype was being driven at pace around the ‘Green Hell’ in preparations for a lap record attempt later in the year. The clip also provides us with an excellent chance to see and hear the F1-powered hybrid hypercar in full flight.

Found beneath the skin of the Mercedes-AMG One is a mid-mounted 1.6-liter turbocharged V6 that revs to 11,000 rpm and is derived from Mercedes’ Formula 1 car. This engine alone packs 566 hp and is supplemented by an electric motor on the crankshaft with 161 hp, an electric motor integrated into the turbocharger with 121 hp, and a pair of electric motors at the front axle that combine to produce 322 hp. All up, the car pumps out 1,049 hp.

While Mercedes-AMG hasn’t confirmed downforce numbers for the One, this clip shows that it can take some of the ‘Ring’s long, flowing corners at dizzying speeds, all while looking very poised.

On paper, the One certainly has the ingredients to set a new production car lap record around the circuit. After all, the current record of 6:38.835 is held by a Porsche 911 GT2 RS from Manthey Racing with ‘only’ 690 hp. Setting a record isn’t easy, however, as Koenigsegg discovered back in 2016 when it crashed a rare One:1 at the circuit while trying to go faster than any other production car had gone before.