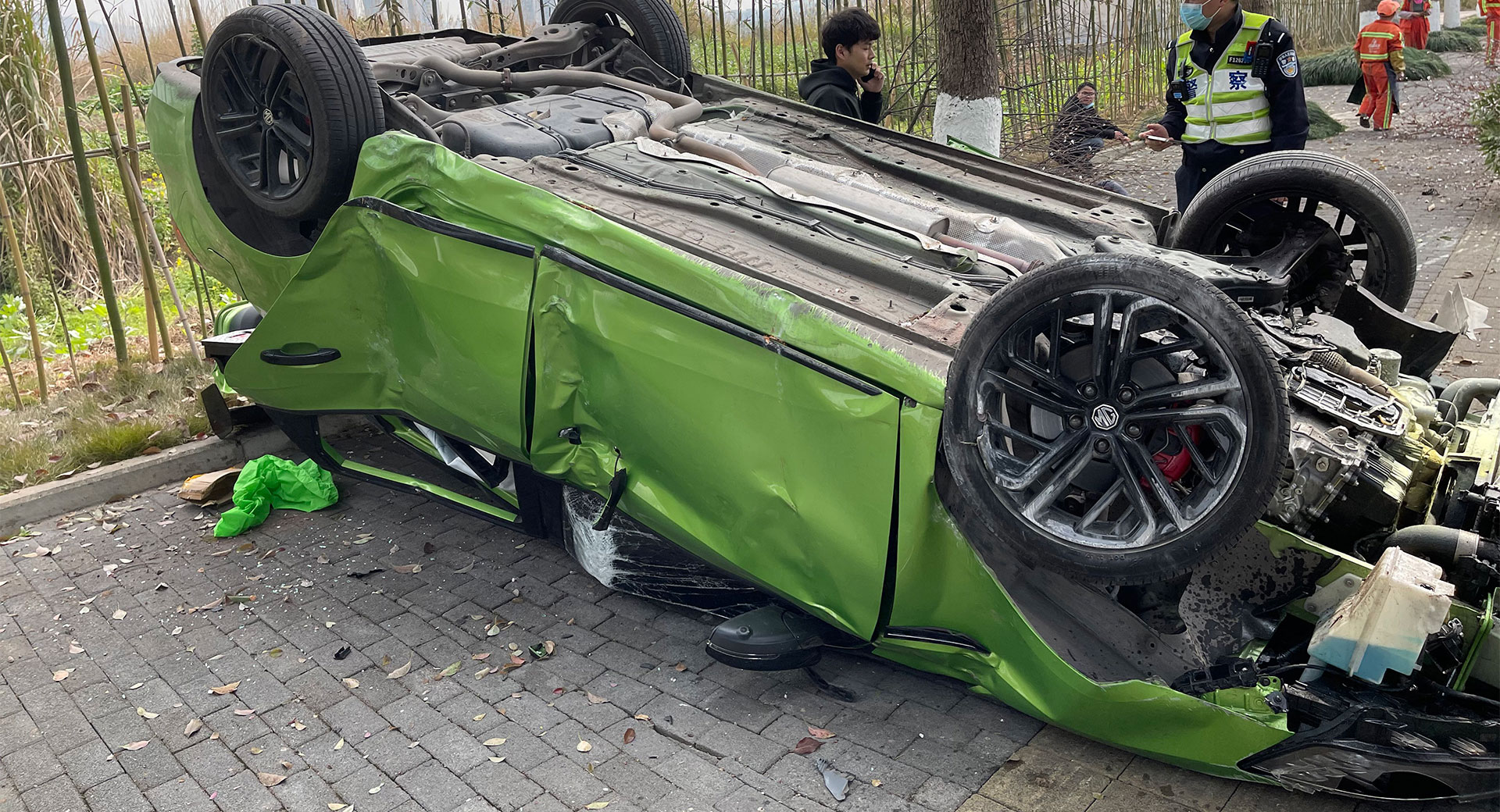 
An MG6 sedan has been absolutely destroyed after crashing into a Tesla Model 3 in China and rolling onto its roof. Making the accident even more unusual are the stickers affixed to the rear of both the MG and the Model 3.

Dashcam footage from the white Model 3 shows it traveling in the middle lane of a highway. The lane to the left of the Tesla begins to end but the impatient driver of the green MG6 thought it would be a good idea to try and overtake the Tesla in the far-left lane, just before it ends.

However, to avoid making contact with the barriers in the left lane, the MG6 driver has to pull in front of the Model 3 a little too early. In doing so, the rear right-hand side of the MG hits the front of the Tesla. The impact essentially triggers a PIT maneuver and the green sedan is speared towards the crash barriers on the right-side of the highway.

Human pilot is to blame for this flip-over. Funny the ICE car owner happens to have a bumper sticker trolling Tesla & it reads “to avoid bumper-to-bumper collision as result of brake failure, distinguished Tesla owner please overtake.” This is the ultimate irony of fate🔥🤣 pic.twitter.com/dA5Tdwljmj

While the dashcam footage doesn’t show the crash, images shared online do show the aftermath. They reveal that the MG6 came to a rest on its roof, likely after flipping multiple times after hitting the crash barrier. It has been completely destroyed, the roof has caved in, the front end is wrecked, and both sides have been heavily dented. By comparison, the Tesla only suffered a small scrap on its front bumper, quarter panel and one of the front wheels.

While any accident like this is bound to capture the attention of some, it is the stickers of the two cars that has made this crash gain traction online. Located on the bumper of the MG6 is a sticker that reportedly reads ‘To avoid bumper-to-bumper collision as a result of brake failure, distinguished Tesla owner please overtake,’ poking fun at supposed Tesla brake issues in China.

Bizarrely, the Tesla Model 3 driver also had a bumper sticker on their car, reading ‘Brake failure – please stay away from me.’

In any case, the driver of the MG6 is clearly to blame for the crash. It is unknown if they or any passengers were injured.

Netizens say this is the funniest car accident in China: a Model 3 with a self-deprecating brake-failure sticker crashed into an MG6 with a sticker mocking Tesla’s brake-failure, and the MG6 flipped over with little damage to the Tesla. pic.twitter.com/GZ4MwRz91d