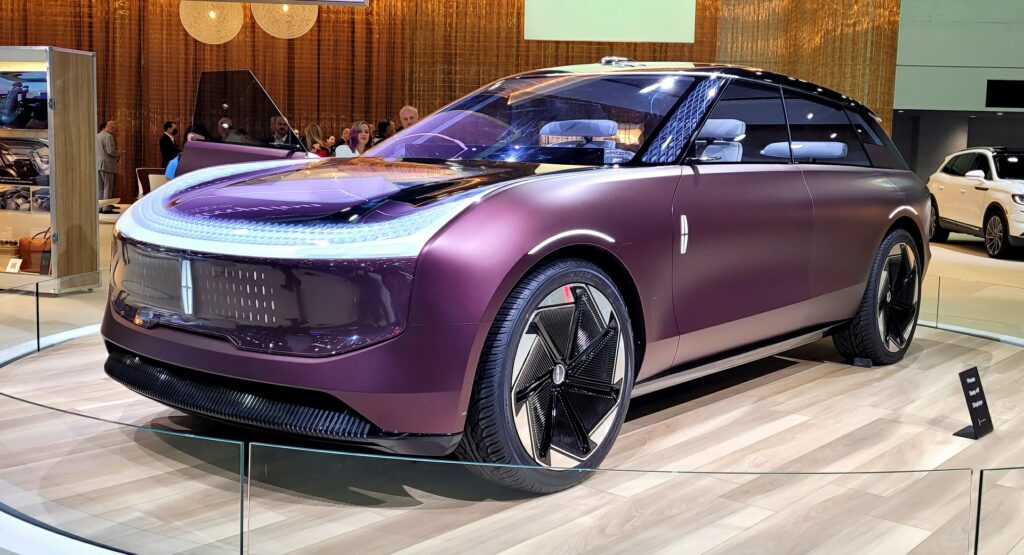 Lincoln performed the world premiere of its Star concept SUV at the 2022 North American International Auto Show in Detroit today and just to keep things fresh, it gave the study a new matte purple paint job. You can check out the live photos of the Star that our man Mike Gauthier took at the show in the gallery below. (Updated 9/14/2022)

As Lincoln begins its second century of existence under Ford it’s looking to the all-electric future with an all-new Star Concept SUV. While not officially planned as a future product itself, the sleek new crossover is the ‘captivating dynamic new face’ of the future at Lincoln. It’s a vision that focuses heavily on comfort, convenience, and a constellation of next-generation features as the brand moves to electrify its entire lineup.

Last year, Lincoln had its best year in terms of global sales since around the turn of the century. Now, it’s leveraging that success to plan for a future where more than half of its global volume is based on electric vehicles by the end of 2026.

To achieve that it’s going to deliver three new fully-electric vehicles by 2025 with a fourth one to follow by the end of 2026 and the Star Concept hints at the design and details we can expect from those EVs. “Electrification is removing many traditional vehicle design constraints, allowing us to reimagine what a vehicle can be,” said Ford’s new chief designer, Anthony Lo. “The Lincoln Star is a study of experiences and themes that push the boundaries of Lincoln design – and it’s just the start.”

This is a bold SUV that’s more cohesive and stately than many rival offerings we’ve seen in the past few months. It also places a heavy emphasis on interior comfort, something that Lo had alluded to in a recent interview.

Not unlike the Lucid Air, the front and rear seat areas are divided by color in the Star Concept. The rear seats lean into the lounge theme with wraparound styling and individual leg rests. There’s even a beverage chiller in the back seat. Up front, a huge panoramic “coast to coast” floating screen includes not just the infotainment but the driver information display as well. 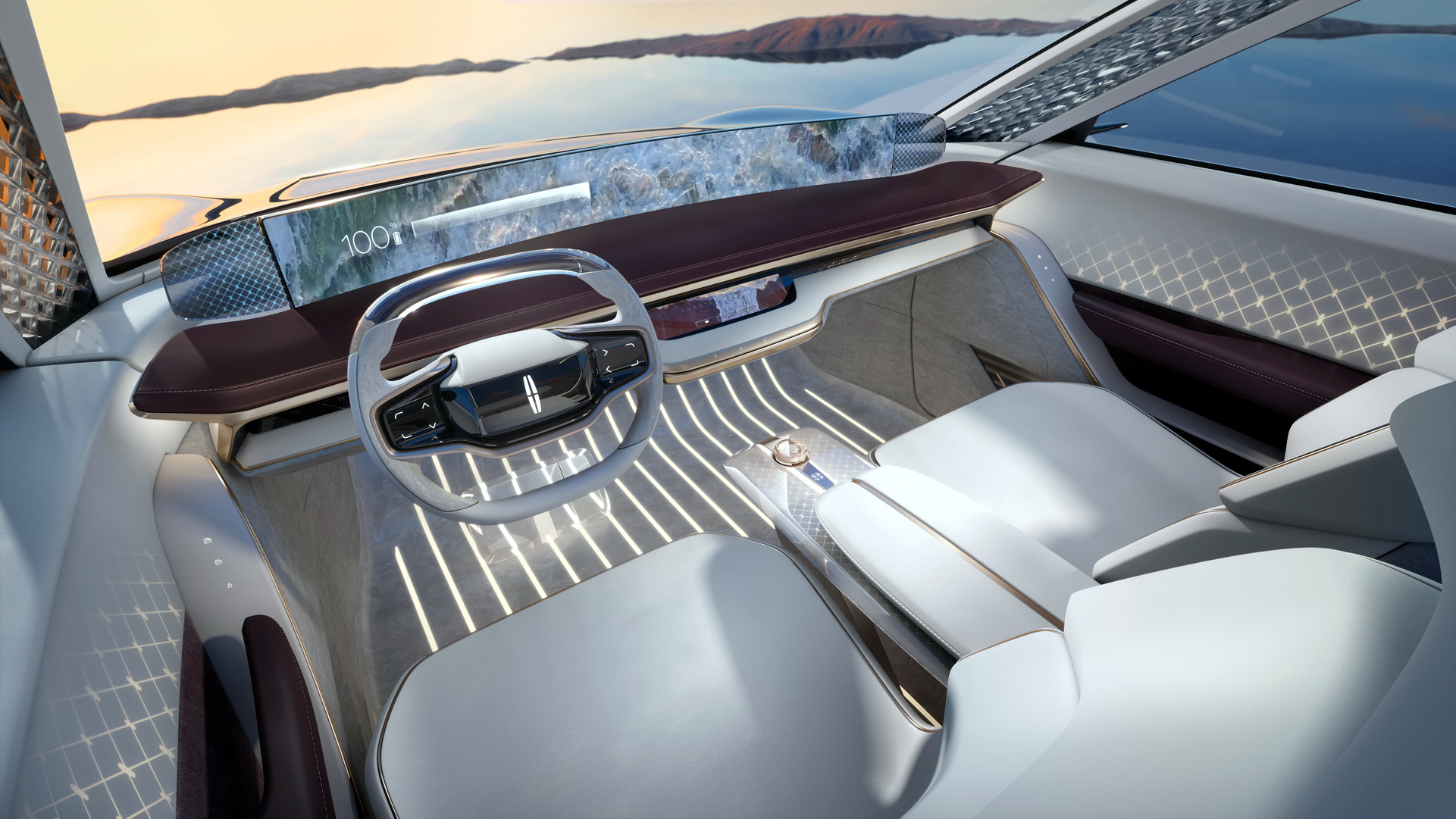 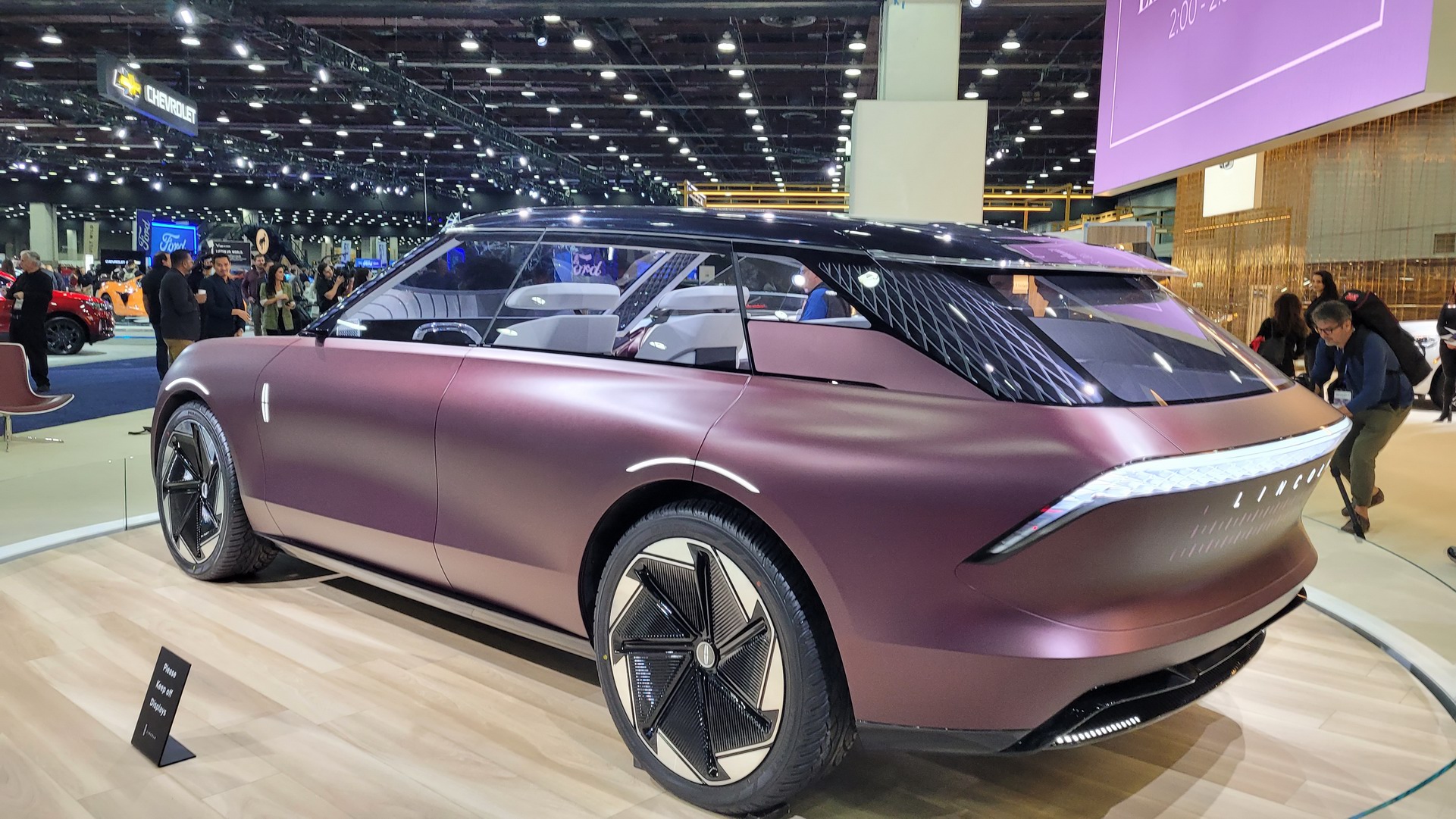 “This is a shining example of what happens when we combine Lincoln luxury with flexible electrical architecture to create unimaginable experiences for customers,” said Jim Farley, president and CEO, Ford Motor Company. “We can truly revolutionize how people engage with the brand and scale it across an exciting lineup of products that catapult Lincoln into the digital, connected age.”

At the heart of the spacious interior is the brand’s battery-electric architecture which allows designers to be more imaginative and playful with the use of space above the battery pack itself. According to Lincoln, the architecture uses either rear or all-wheel-drive which is in keeping with similar vehicles at Ford.

It’s not just the cabin compartment or the exterior styling that’s interesting though. The Lincoln Star Concept has some cool tricks up its sleeve, well, frunk and trunk in this case. Open the rear hatch and the Star Concept has a ‘lounge mode’ which transforms into outdoor seating.

At the front of the vehicle, the hood itself is made of electro-chromatic glass that can change from transparent to opaque at the push of a button. That feature allows owners to see what’s in the main compartment of the frunk without having to open it. Additionally, there’s a drawer below the main level of the frunk that can hold stuff that you don’t want others to see.

While there’s no mention of it directly from Lincoln, one image of the Star Concept shows the steering wheel folded away and the front seats turned towards the rear. That would certainly be one comfortable way to travel if the technology was available to do it safely. Now we just have to wait and see how much of the Star Concept makes it to the real world. We’re really pulling for the suicide doors.