We see dealers adding ridiculous markups on desirable new cars every day, but that doesn’t make it any less infuriating. We’re getting reports of some Nissan dealers adding tens of thousands of dollars above MSRP for the 2023 Nissan Z Proto Spec limited edition.

The new 2023 Nissan Z marks the return for the popular Japanese sports car and thanks to a starting price of just $39,990, it undercuts its closest rival, the Toyota Supra, by some $12,925. The range-topping Proto Spec however is limited to just 240 examples for the entire country and this month, the first units are scheduled to become available. Some of the prices we hear for the limited-edition Z are wild.

First spotted by the folks over at NewNissanZ.com, at least three different dealers seem to have hefty markups in place on the sports car. In the first instance, a text message exchange alleges that Jeff Wyler Nissan in Louisville, KY, is charging a $50,000 premium on top of the $54,015 price shown on its website. 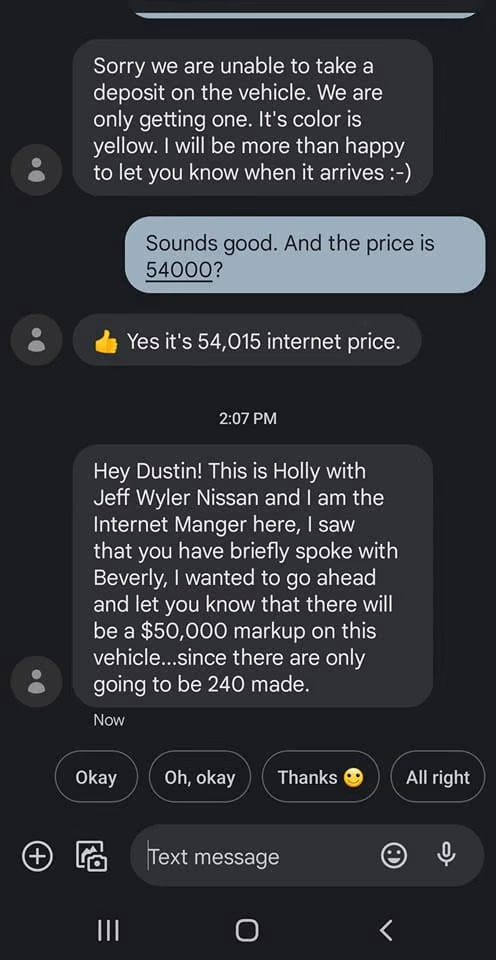 Another dealer, Mike Rezi Nissan in Atlanta, GA, has a 2023 Nissan Z Proto Spec listed for $78,990. They do not have an MSRP listed but that’s at least $20,000 over the sticker price regardless of options. Finally, a third image purports to show an advertisement from Nissan of Irvine that says “Buy now for $125,000.”

That’s the least believable of the bunch and according to the original poster, that language has already been changed to say “See it in person.” Another user in the same thread had an interesting idea saying “With an OTD (Out the door) price like that I rather get a used R35 GT-R.” The Z Proto Spec certainly wouldn’t be able to keep up with the GT-R.

We’ve reached out to Nissan as well as to Jeff Wyler Nissan and Mike Rezi Nissan for comment and will update this story if we hear back from either party. We hope they’ll be as willing as Ford was to respond in word and in action when a similar situation came to light regarding the F-150 Lightning.