The Subaru Outback is the only vehicle in its field (made up entirely of 2022 model year vehicles) to earn the safety group’s highest rating in the test, which simulates a T-Bone type crash. The Hyundai Sonata and Volkswagen Jetta, meanwhile, earned “Acceptable” ratings, and the Honda Accord earned a “Marginal” rating.

The Toyota Camry, Nissan Altima, and Chevrolet Malibu, meanwhile, struggled mightily and earned “Poor” ratings. The latter two vehicles’ crash structure was found to not adequately protect vehicle occupants. In all three, though, the IIHS reports that there was a significant risk of head injury as the dummy’s head slipped below the curtain airbag and made contact with the window.

Read More: The IIHS Has Introduced A Tougher Side-Impact Crash Test And Small SUVs Are Struggling

That’s one of the biggest difference between the cars that performed poorly and those that performed better. Head protection in the Outback, the Sonata, and the Jetta was found to be high. Indeed, that may be one of the challenges faced by these vehicles in this updated test.

The new test is designed to better reflect real roads and real accidents, so the IIHS has updated its crash barrier (in this case a moving barrier designed to simulate an approaching vehicle) to weigh more (4,200 lbs/1,905 kg) in order to hit the test vehicles more like an SUV. The tests are also being run at higher speeds, 37 mph (60 km/h), instead of 31 mph (50 km/h). Under the old test regimen, all seven vehicles earned “Good” ratings.

The IIHS suspects that these new updates may put vehicles with a lower ride height at a disadvantage. Although it’s being considered a midsize car, the Outback has a higher ride height and may, therefore, have a natural advantage here. Indeed, the IIHS reports that midsize SUVs fared better in this test than these midsize cars.

“With vehicles that sit lower to the ground, the striking barrier hits higher on the door panel,” says IIHS President David Harkey. “That potentially puts sedans and wagons at a disadvantage in this evaluation, but reflects what happens in a real-world crash when these vehicles are struck by a higher-riding pickup or SUV.” 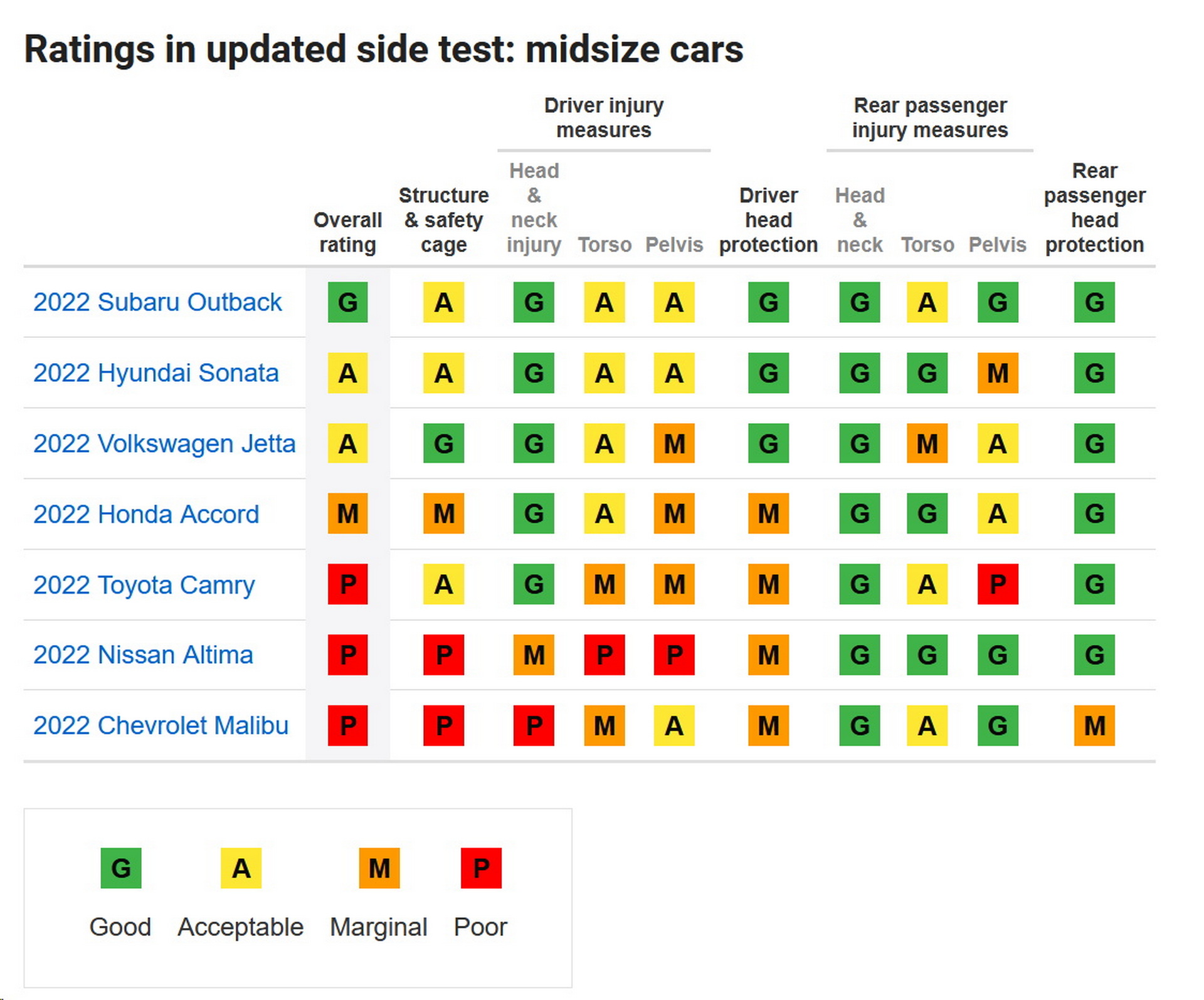