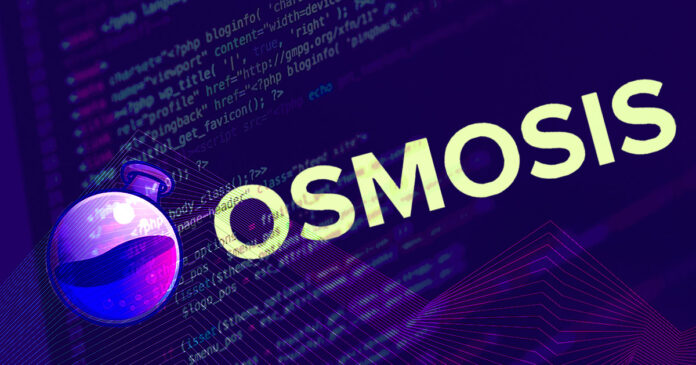 Osmosis founder Sunny Aggarwal took to the Comosverse stage in Medellin on Sept. 26 to speak not about Omosis but mesh security systems.

Aggarwal opened his talk in a 40lb suit of chainmail armor, which he “lugged across two continents… for a one-line joke.” Given the party atmosphere that had already been seen at the conference, the armor was in keeping with the event’s mood.

Aggarwal began his talk earnestly, speaking about the difference in network coordination. The diagram below shows an interesting subsection of network types with economic-left and right on the x-axis and authoritarian and libertarian on the y-axis. The image is an adaptation of the political compass oft used to identify the differences between those on the left or right of the political spectrum.

The image “really spoke to me,” stated Aggarwal, who referred to it as “kind of a meme… but its a good model to define network structures” He went on to explain that the authoritarian economic-left and authoritarian economic-right are based on traditional network architectures that we can find on the web 2.0 version of the internet.

The green systems in the image (Coordination by Consensus) are built using consensus protocols. Aggarwal gave examples of a consensus protocol in the Tendermint BFT consensus system or the concept of traditional democracy. However, Aggarwal argued that

“The problem is that these green systems don’t scale very well as they require n-squared communication.”

The issue with the scalability of consensus protocols is something Aggarwal claimed was known when Cosmos was being developed and was why Inter-Blockchain Communication(IBC) was invented. IBC was the method, according to Aggarwal, that allowed ‘green sub-systems’ to talk to each other.

However, a network of ‘green sub-systems’ could evolve into a more authoritarian system if a specific network sits at the heart of the overall network as a meta-topology. Aggarwal argued that Polkadot parachains or Ethereum using roll-ups are prime examples of this in practice.

“If we just end up recreating this with Cosmos, I think the entire Cosmos experiment was a waste of time… we didn’t really accomplish anything.”

Aggarwal argued that this scalability issue means that “we need mesh systems” but that “voting does not work at an inter-chain level.” Therefore, he settled on the ‘yellow systems’ within the above chart, which represent ‘Emergent Coordination.’

The Osmosis co-founder reasoned that the Cosmos ecosystem has already formed a mesh system similar to the ‘yellow system’ of the chart. The IBC system on Cosmos allows chains that need to talk to one another but does not force such a relationship on the entire network.

Within the security world, Aggarwal asserted that the NATO alliance is the best example of a ‘yellow system’ in the real world. In NATO, each country is a sovereign nation with its internal policies and network architecture. However, if one is attacked, article 5 states that all other members must protect it.

The NATO example is one Aggarwal believes is directly relevant to interchain security. Currently, validators validate their own blockchains.

Version 1 of interchain security is where one validator set entirely validates another sovereign blockchain. Aggarwal identified that this method is similar to a block size increase and is thus not ideal or novel.

The second version of interchain security, Aggarwal explained, would be where a subset of validators fully validate another sovereign blockchain. This version is referred to as ‘sharding’ in other ecosystems. It is more scalable and doesn’t require a consensus to add additional blockchains. However, Aggarwal asserted that this version still lacks the overall sovereignty of a proper mesh system.

However, in the third version, Cosmos still acts as a centralized ‘red’ point of failure for the entire ecosystem, as shown in the image below.

The solution to the centralization issue of version three, Aggarwal posited, is to allow chains such as Osmosis to validate the Cosmos chain via a subset of Osmosis validators, thus creating a mesh network.

“All Cosmos chains are going to be both provider and consumer chains… its going to be a mesh network of security.”

Cross staking and the future of mesh security

Aggarwal then showcased that roughly 75% of validator sets on Osmosis also run validators on Juno, while 72% of Juno validators also validate Osmosis.

The impact of this is not an increase in centralization, Aggarwal claimed, but a form of ‘soft shared security’ whereby malicious validators on one chain would be slashed on another chain through governance.

Aggarwal presented the concept of cross-staking within the Cosmos ecosystem to codify this shared security. Cross staking would allow validators to boost rewards across the Cosmos ecosystem by using IBC to “submit transactions and correlate their identity across both chains.”

To avoid centralization, all delegators choose the validator with the highest rewards due to their involvement in cross-staking; Aggarwal explained that delegators could also cross-stake to a separate validator.

Further, Aggarwal clarified that smaller chains would be able to cap the voting power of other chains to protect against 67% attacks.

According to Aggarwal, cross-staking is likely to be extremely attractive to chains with high economic interdependence. Chains such as Osmosis and Axelar or Osmosis and Mars share millions of dollars of economic activity. Thus the ability to protect each other is in both parties’ best interests.

As a small easter egg and to demonstrate the laid-back nature of the event, prior to Aggarwal’s talk, below is a clip from the Cosmoverse opening. The Cosmoverse conference kicked off with a version of Eminem’s ‘Forgot about Dre’, including lyrics altered to apply to the Cosmos chain. The words to the chorus read,

“Nowadays every token wanna talk like they got some use case. Nothing shows up, they tell you to buy the dip, just a bunch of gibberish; what the motherf*ck was that? Like Cosmos isn’t great.”

A clip from the song is shown below. Viewer discretion is advised as some scenes include high levels of cringe.