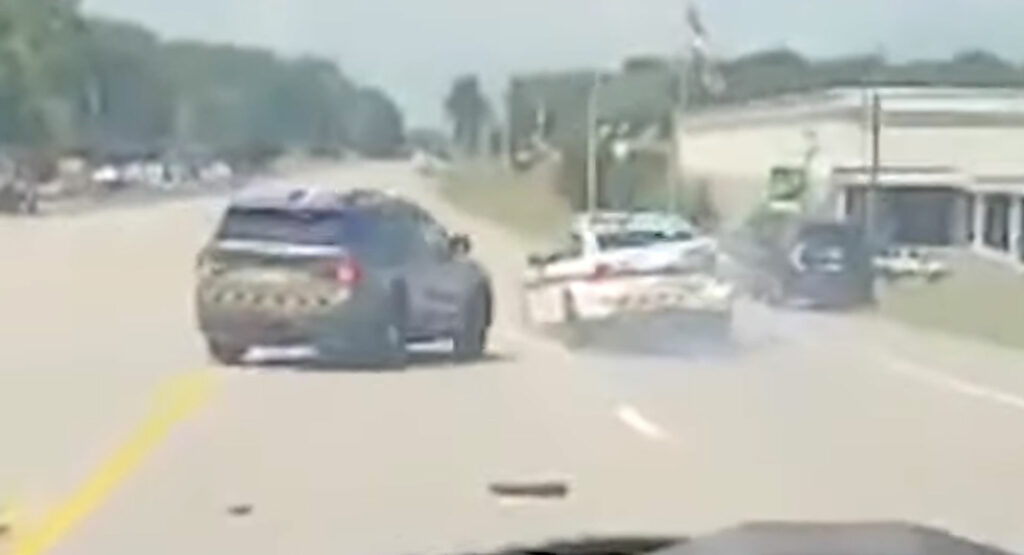 Law enforcement officers are used to getting calls about stolen vehicles, but it’s rare when the victim is one of their own. However, that’s exactly what happened in Cumberland County, Pennsylvania yesterday.

According to CBS 21, a state trooper conducted a traffic stop on Interstate 81 in Silver Spring Township shortly before noon on Thursday. While it’s not immediately clear what prompted the stop, the driver and passenger of the vehicle fled, taking off in the Ford Taurus-based Police Interceptor Sedan.

This sparked a pursuit with multiple departments responding. While the chase was underway, 31-year-old Malik Lamar Clover reportedly jumped from the passenger seat and ran to a nearby hotel, where he was later arrested.

Also Watch: Honda CR-V Driver Shows How Not To Run From The Police

30-year-old Hanif Malik Hall continued driving and a witness managed to catch part of the chase on video. As you can see in the short clip, Hall slowly drives the Police Interceptor Sedan into oncoming lanes and briefly stops on the side of the road. An officer or trooper then slams into the vehicle, which causes the pursuit to resume.

As the video continues, the Police Interceptor Utility performs a PIT maneuver and causes the sedan to spin around. Undeterred, Hall continues as a Hyundai and minivan attempt to box him in.

The pair is now facing a long list of charges, which are said to include fleeing and eluding, robbery of a motor vehicle, and illegal possession of a firearm.