Patrick Rhone’s recent essay in MinnPost appeared to decry the selfishness of advocates for improved bike infrastructure on Summit Avenue. While accusing bike advocates of advocating for bike lanes that only an elite, privileged few can enjoy, Rhone paints car infrastructure as our foremost priority, as he describes different marginalized people that might not be able to use bikes. It is an attempt to argue that favoring cars over bikes is equitable.

But we need not rely on anecdotal demographic breakdowns from public meetings when making judgments about what is systematically equitable; we can look at data and think more holistically about transportation. Upon doing so, it becomes clear that supporting car-first infrastructure is highly inequitable.

In his article, Rhone said that bike advocates ignore “those who have two (or sometimes three) jobs to make ends meet,” suggesting that a defense of cars is a defense of hardworking, low-income people. When I read this line from Rhone, I thought of the below graph from the parking study done by the city of St. Paul in March 2021. The graph breaks down car ownership rates by income bracket, and it clearly shows that low-income people are far less likely to have cars. 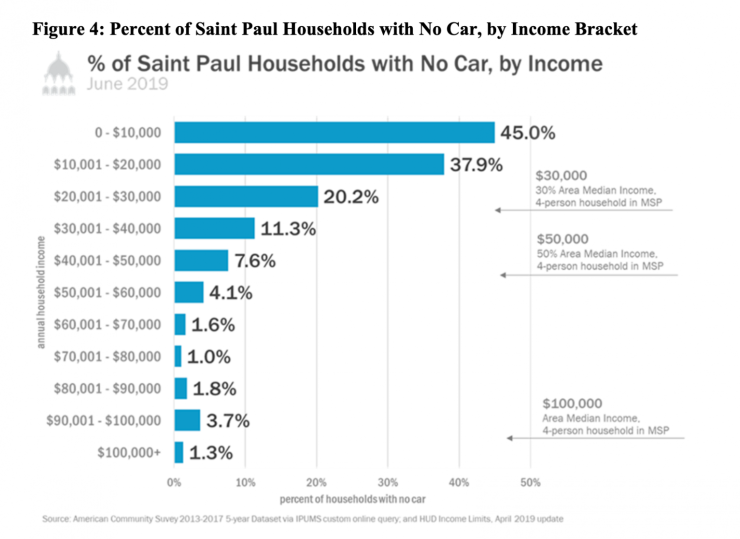 To make the above graph, the staff at St. Paul used American Community Survey data from IPUMS, a census database hosted at the University of Minnesota. I used their handy online tool to do some more calculations of who in St. Paul doesn’t have a car.

We can look more broadly at a comparison of those in poverty compared to the overall population, to see the same trend. The comparison is similar between homeowners and renters. 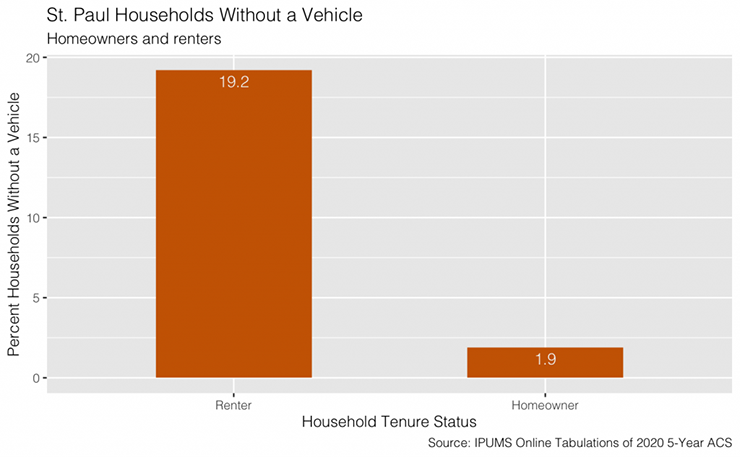 There are also large racial disparities with car ownership. Although Rhone writes about the “overwhelmingly white” group of bike advocates, his defense of car-first urban design is clearly no argument for racial equity (let’s ignore his offhand insinuation that people who admire European street design are white supremacists). 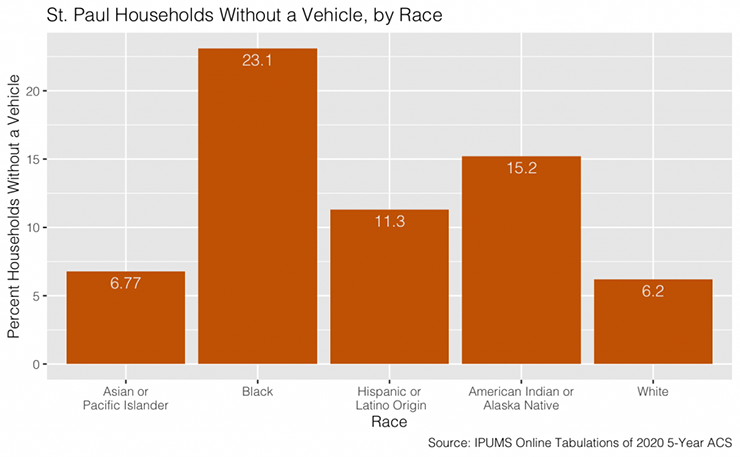 Rhone also mentions elderly and disabled people as groups who may be unable to bike as part of his argument that bike advocates are exclusive. Yet both groups are also relatively quite unlikely to have cars. 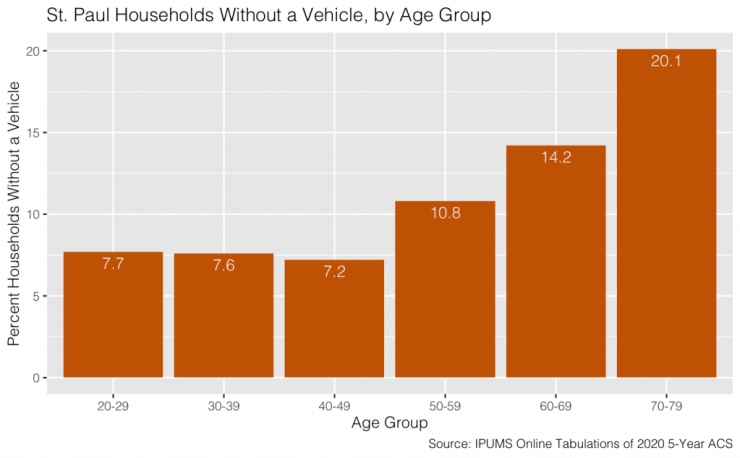 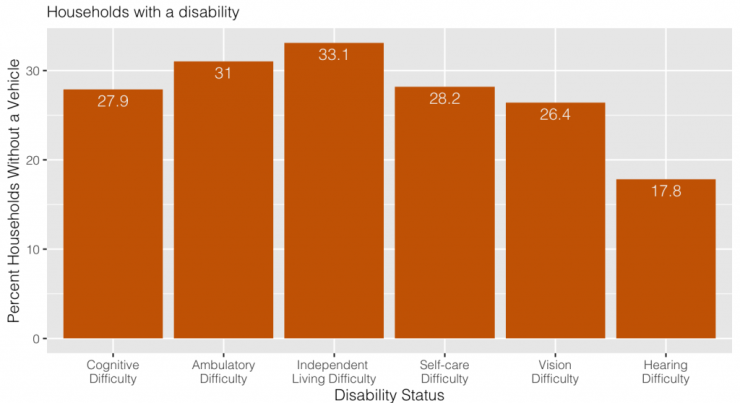 To be clear, biking isn’t for everyone; some people will never use bikes as their primary form of transportation. Those who have physical limitations preventing them from biking, or have certain time and distance constraints, cannot only rely on bikes. People with disabilities, for example, need better options for getting around cities than just good bike paths. Safe bike infrastructure is far from a complete transportation solution for various marginalized communities.

But we so rarely hold car infrastructure to the same standard, despite the fact that car ownership is distributed in highly inequitable ways. People need better transportation infrastructure than just safe bike paths, but they also need much better than roads and parking lots.

Furthermore, perspectives like Rhone’s are pessimistic, ignoring the fact that people make transportation choices in response to urban design. They fail to imagine a better world. It doesn’t make sense to say that we shouldn’t invest in bike infrastructure because bikers might be more privileged — better bike infrastructure will lower barriers to biking and allow more people to do it. A recent study in Minneapolis measured how increases in the density of their bike network affected ridership during the evening commute (4-6 p.m. on weekdays) from 2007-2013. Over those six years, ridership in areas with no bike lanes increased by 10%, while areas with protected bike paths (such as those proposed on Summit Avenue) increased by 69%. When biking is safe, more people do it.

Lastly, shaping our cities around cars can hurt everyone — not just people that don’t have cars. In The High Cost of Free Parking, UCLA scholar Donald Shoup describes how free parking benefits us when we are actively car users, but hurts us the rest of the time. The same idea can be applied to car-first infrastructure more generally.

Cars are heavy, fast and dangerous — see Andy Singer’s compilation of some recent pedestrian and bike accidents with cars on Summit Avenue. They take up huge amounts of space in our cities — 35.6% of St. Paul’s land area. They are huge contributors to carbon emissions, and the small portion of electric vehicles on the road still put other harmful particulate matter into the air. While car infrastructure is convenient to us as car users, it hurts us as pedestrians, bikers, residents and air-breathers.

Building safe bike paths on Summit Avenue is an incomplete remedy for our city’s transportation ailments. It will not address everyone’s needs. But too many people have failed to apply that same analysis to our car-centric status quo — and in comparison to this, the Summit Avenue bike lanes are a huge improvement. We must continue to fight for this step forward in St. Paul.

Zak Yudhishthu is a student in St. Paul, and sits on the board of the Macalester-Groveland Community Council.

Want to add your voice?

If you’re interested in joining the discussion, add your voice to the Comment section below — or consider writing a letter or a longer-form Community Voices commentary. (For more information about Community Voices, see our Submission Guidelines.)