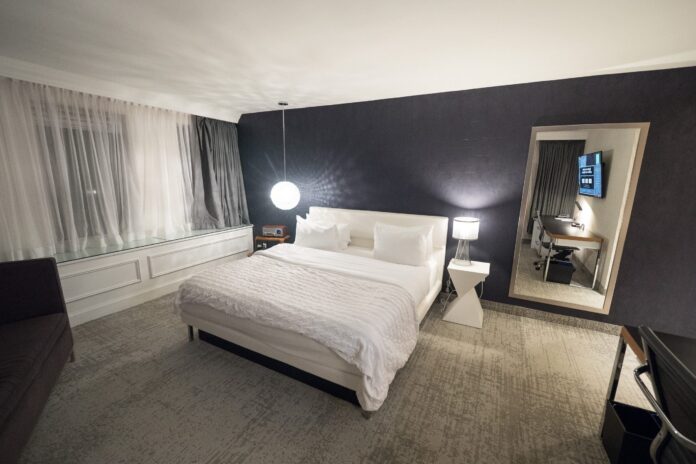 En route to Europe, I made a quick pit stop in Montreal, where I stayed at Le Méridien Versailles.

After shuffling my outbound flights, it made sense to squeeze in a one-night layover, which was well spent catching up with friends.

I booked my stay at Le Méridien Versailles using an eligible corporate rate for $165 per night.

Using Marriott Bonvoy points, the property goes for around 30,000 points per night. With city hotel prices usually through the roof, staying on points can at times be a decent value proposition. I opted to pay cash for my one-night stay. Generally you’ll notice that this hotel is more affordable than others around downtown Montreal – and it shows, as you’ll see.

Le Méridien Versailles is in the Golden Square Mile, a bit outside the tourist and financial core of downtown where many hotels are concentrated, but still well within range for a visitor to enjoy themselves.

The hotel is on Sherbrooke Street not too far from Montreal General Hospital, and a short walk to the heart of Concordia University’s urban campus.

You’ll have easy access to explore the park at Mount Royal to the north, or the ornate homes of the municipality of Westmount to the west. To the south, take in the lively Crescent Street.

It’s quite easy to reach the hotel, less than two blocks from Guy–Concordia metro station. I travelled to and from the hotel via the 747 airport express bus to Lionel–Groulx metro station, followed by a short transfer on the green line. For a long layover, two airport trips fit within a single 24-hour STM fare for $11.

Arriving on foot, the building reminded me of the stark brutalist architecture from my days on McGill campus just down the street. It looked like it had been there forever, frozen in time along with the adjacent apartment buildings.

There’s a collection of flags above the awning, giving off classy vibes that reminded me of the hotel aesthetic in New York or Western Europe.

The lobby is minimally designed both for form and function, making use of playful lights and geometric shapes in a compact and functional space.

There’s a small sitting area to the left flanking the restaurant.

To the right is the front desk. Check-in was very efficient, but no less friendly. The valet was proactive in offering to arrange a ride to the airport the next day, which I politely declined.

To my delight, I had been proactively upgraded to a Junior Suite without even asking! I had noticed this in the Marriott Bonvoy app two days prior when I went to check my reservation.

The Junior Suite is the second-highest room type and the highest available for a free upgrade, so I took the win and didn’t push my luck. Without hesitation, I headed to my suite to get on with my jam-packed layover.

Stepping out of the elevator on the 11th floor, I found the hallways to be quite sparse, to put it kindly.

Entering the room, there’s a staging area to put your luggage.

The small shelf is suitable for keys and accessories. There’s an interesting stool underneath – thankfully this perch is for putting on your shoes, as it would be unbearable as a desk!

Beside, there’s a kettle with standard coffee, tea, bottled water, and a mini-fridge, as well as a closet with an ironing board.

The bathroom is well-lit, with a neat touch-activated light switch built into the mirror.

Unfortunately the shower temperature was scalding hot at all but the slowest trickles.

Moving into the main room, a king bed awaits.

The bedside lamps are just about the only features of the hotel experience that showed any character. On the far side of the bed, there’s a funky old-time radio with an analog clock.

Along the interior wall, there’s a sprawling desk with a comfortable office chair. I found this to be an easy place for some quick light work.

The TV is mounted here above the desk, putting it at an angle to both the bed and the sofa.

The sofa’s aesthetic matched the rest of the building’s aged structure. It was more comfortable than expected, though far from inviting.

While the room is spacious enough and has a comfortable entryway, it lacks any distinctive separation within the living space to give it a “suite” feel. The sofa can hold guests, but there’s no coffee table or other seating around which to congregate.

I was visiting at the tail end of the east coast’s humid summer season, and let me tell you – I’d forgotten how brutal it can be. I was sweating through clean shirts within 5 minutes, just standing in the room!

I was disappointed that the old building’s air conditioning was incredibly ineffective. I swear it was colder and drier in the hallways than in my suite. Plus, it was challenging to refresh effectively in the hot shower, adding insult to injury in the Montreal humidity.

To end this section on a high note, I enjoyed the pleasant peekaboo view of Mount Royal, approximately north-facing on Montreal’s skewed grid.

Free breakfast was included as a Platinum Elite benefit with my Marriott Bonvoy Titanium Elite status. With no lounge on the property, breakfast is served in the restaurant beside the lobby.

I was surprised to see that the restaurant offered a glorified continental breakfast – and to call it glorious would be far too generous.

I snacked on fruit salad and orange slices.

Hard-boiled eggs, ham, and cheese were also available, none of which appetized me.

Self-serve coffee and tea are available from kettles.

There’s also a bread station and toaster, individual packets of peanut butter and jam, and single servings of yogurt and cereal.

The saving grace was the croissants – leave it to the French baking tradition to get this one right.

Dissatisfied, I ended up grabbing a second breakfast over coffee down the street with a friend at Cafe Aunja. The unassuming Persian cafe is a fantastic hidden gem. I wouldn’t hesitate to eat there again over Le Méridien Versailles if I’m back at the property.

The hotel restaurant Maiolo features a lunch and dinner menu, which you can browse in the room. The fitness centre is quite small, with few cardio machines and a meagre set of free weights.

While the cramped, grey fitness room is about as unmotivating as I could imagine for a workout, I did get a chuckle out of the calorie-counting chalkboard.

Finally, the hotel is pet-friendly, allowing two pets per room for $20 per night.

If I could sum up my stay at Le Méridien Versailles with a single impression, it would be “room for improvement.”

Based on my observations, I wouldn’t have believed that this property was recently renovated in 2016. It’s fair to say this hotel overstates its glamour. Overall, I wouldn’t say I was unhappy to be there, but I was absolutely unexcited.

The building is noticeably dated, the facilities are sparse, and there’s no reason why a hot breakfast can’t be offered. Moreover, in spite of the hospitable staff, I found little to entice Marriott Bonvoy Elite members to stay here, as the breakfast and suite hardly sparkled.

In addition, I expected a bit more personality from my first visit to a Le Méridien property. Instead, the old-world charm that I anticipated from the brand used Montreal charm as a stand-in, which, for anyone who truly knows and loves the city, is complicated to say the least.