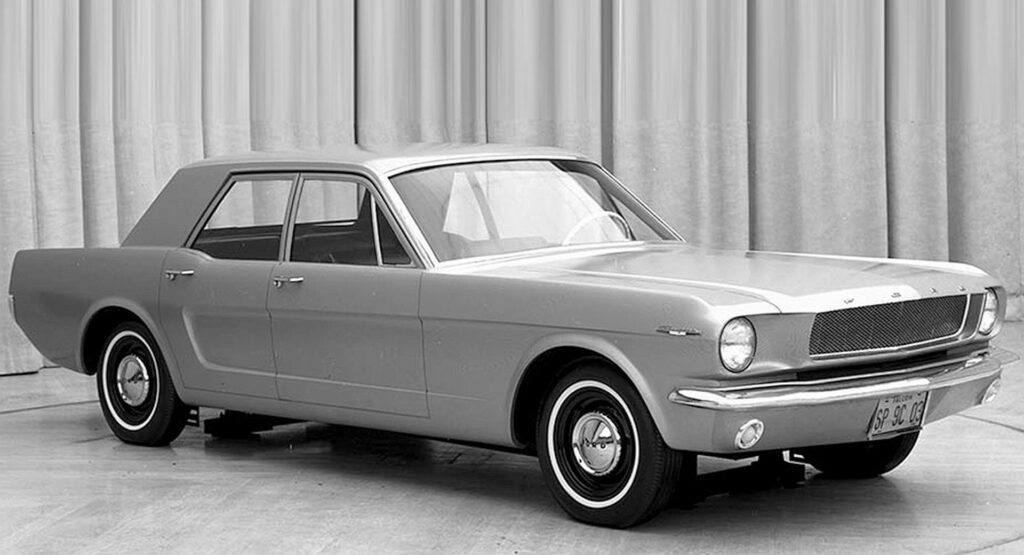 There’s only a few days to go until Ford pulls back the covers on the 2024 Ford Mustang and we get to find exactly how it move the pony car game on, presuming it does at all.

One of the ways we were expecting Ford to steal a march on its rivals is by offering hybrid drivetrains. Chevy’s Camaro isn’t available with any kind of electrical assistance, and neither is the Dodge Challenger, which is kind of understandable when you consider it dates from the mid-2000s when hybrids were so niche South Park devoted a whole episode to trolling the Toyota Prius.

But since the hybrid idea has reportedly been scrapped, here’s one other way Ford could get one over on Chevy and pull level with Dodge, which offers muscle car fans both the Challenger and Charger: build a four-door Mustang. Yeah, there’s already the Mach-E, but it’s designed to appeal to a totally different market. I’m thinking more Mustang as budget BMW M8. Not a crossover, but a low-slung fastback with four sexy frameless doors, the Mustang face up front and a similar fastback rear to the current car’s. I ran a BMW M8 GC for seven months and loved it, but at $134,100/£130,000 it was well out of my budget, so a Ford facsimile for less than half the money has real appeal.

It would need a little wheelbase stretch over the current car’s (107.1 inches/2.72 m) to make the back seats genuinely viable rather than something to be used only occasionally, but with a choice of EcoBoost four-cylinder power or 500 hp (507 PS) V8 and an agile rear-wheel drive chassis, Ford could really have something cool on its hands. And just imagine a four-door GT500, a genuine rival for Cadillac’s Blackwing sedans and BMW’s M3. Throw some PHEV technology into the mix and you’d have something neither of those brands can offer.

We already know sales of two-door coupes, convertibles and sports cars are on the slide. If the Audi TT lives on, it’ll inevitably do it as a four-door car, and probably a crossover one. There’s a good chance the Camaro is heading the same way, and ultimately that’s probably what the future has in store of the Mustang a generation or so down the line. But making a sporty but practical four-door coupe out of the 2024 Mustang to sit alongside the more usual two-door coupe and convertible could extend the Stang’s life without straying too far from the model’s Mustang DNA.

We already know Ford has considered building four-door Mustangs in the past, and Acura went down the same route when resurrecting the Integra this year because it understood the configuration has much more commercial appeal than a two-door coupe. Though Ford’s American lineup currently offers no sedans, there must be some drivers who’d buy one over an SUV if it actually looked really hot, just as there must be plenty of Mustang fans who don’t want to get rid of their current cars but have no option but to sell up because their family no longer fits inside a two-door coupe.

We’ve seen a few artists’ impressions over the past few years imagining how a family-friendly ICE-powered Mustang four-door coupe could look, and there was a flurry of internet rumors a few years back based around alleged Ford disclosures to dealers that a four-door Mustang with a turbo V8 was coming. But that was pre-Mach-E, the car market has changed dramatically in even the past four years, and nothing ever came of it. Or at least nothing yet.

So what so you think? Is it a four-door ICE Mustang a great idea, or is it too late in the day and those back doors would ruin the Mustang-ness anyway?