We’ve covered markups across a bevy of brands including Chevrolet, Volkswagen, and Toyota. Still, it seems as though Ford might be taking the biggest hit with regard to its reputation. After a tweet from Ford Spokesperson Mike Levine inspired some criticism from shoppers, a quick search revealed plenty of greedy dealers that seem all too willing to damage the brand’s image.

We’ve posted the actual asking price on the dealers’ websites along with the window sticker below but here’s some context first. On Wednesday, we reported on a Florida dealership that originally appeared to have a $69k markup on a base F-150 Lightning resulting in double the MSRP.

One key factor in that report was a direct response from Mr. Levine who decried claims that it was a legitimate markup. He said that the dealer had accidentally input the price of the truck twice and that error led to the wild price – which to be fair, the markup did indeed match the MSRP to the dot. According to Levine, the dealer fixed the problem within 24 hours, while also arguing that it wasn’t a unit for sale but a demo car.

Read Also: Leave It To A VW Dealer To Markup A Used Tesla Model 3 By $10k

This is inaccurate. The dealer confirmed it was an error and the MSRP was input twice online. In fact this a demo unit and not for sale. The sticker was removed within 24 hours. https://t.co/KbaGdNukj6

Citizens of the internet decided to take the opportunity to grill Levine over the vast network of dealers with what seem to be unquestionably intentional markups on Ford products. One Twitter user described the feeling by comparing one of Ford’s biggest targets, Tesla in a reply to the above tweet.

“The difference is that Tesla is open about their prices. You know how much the car is when you order it. No one knows what they’re going to pay for a car when they walk into a Ford dealership. And the last two cars I bought was my wife’s Explorer, and my Tesla Y.” they said.

To be clear, “no one knows what’ they’re going to pay for a car when they walk into a Ford dealership” is a pretty damning attitude but what’s worse for Ford is that it’s more widespread than it would seem. The dealer in question, who claimed it was an error, not only removed the F-150 Lightning from its website but from what we can tell, shut down its Facebook page altogether. Pouring all of that negative energy into a source of frustration isn’t all that shocking when considering all of the absurd dealer markups we found in just one afternoon of browsing. 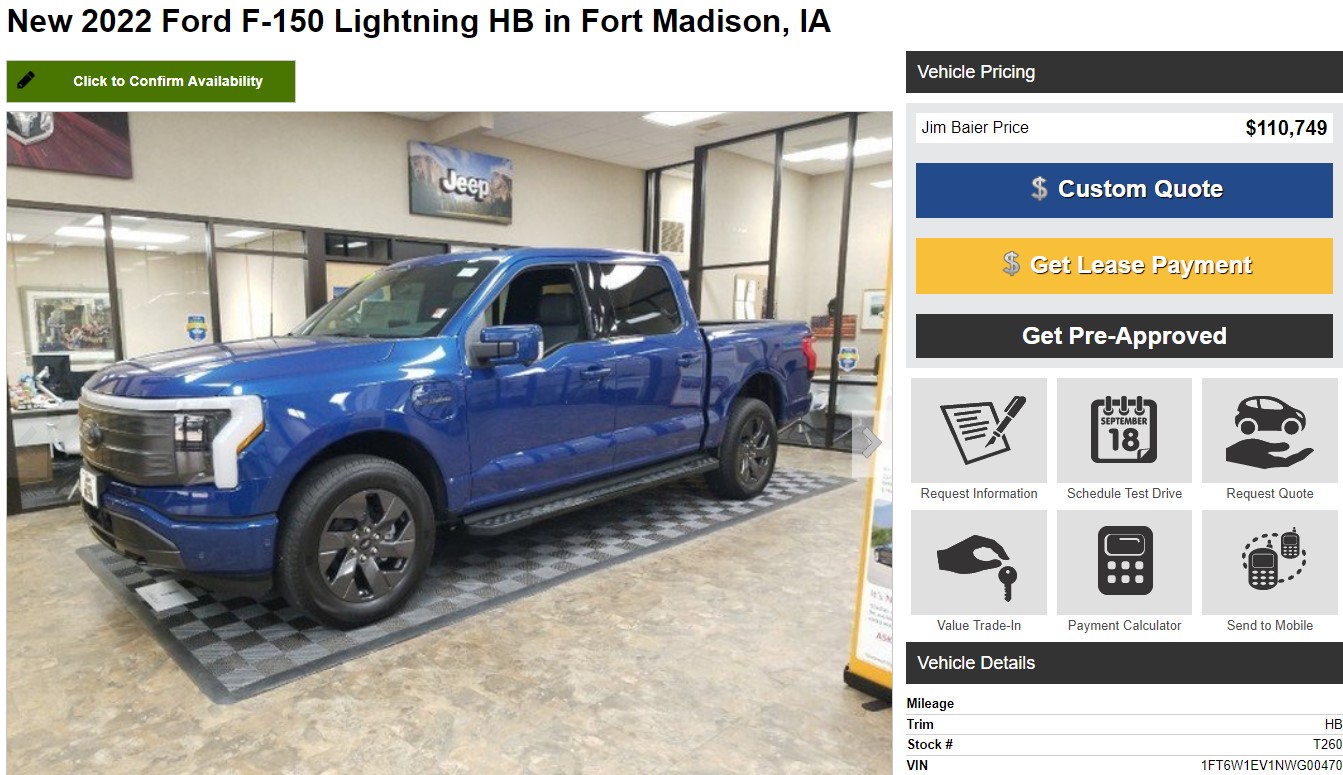 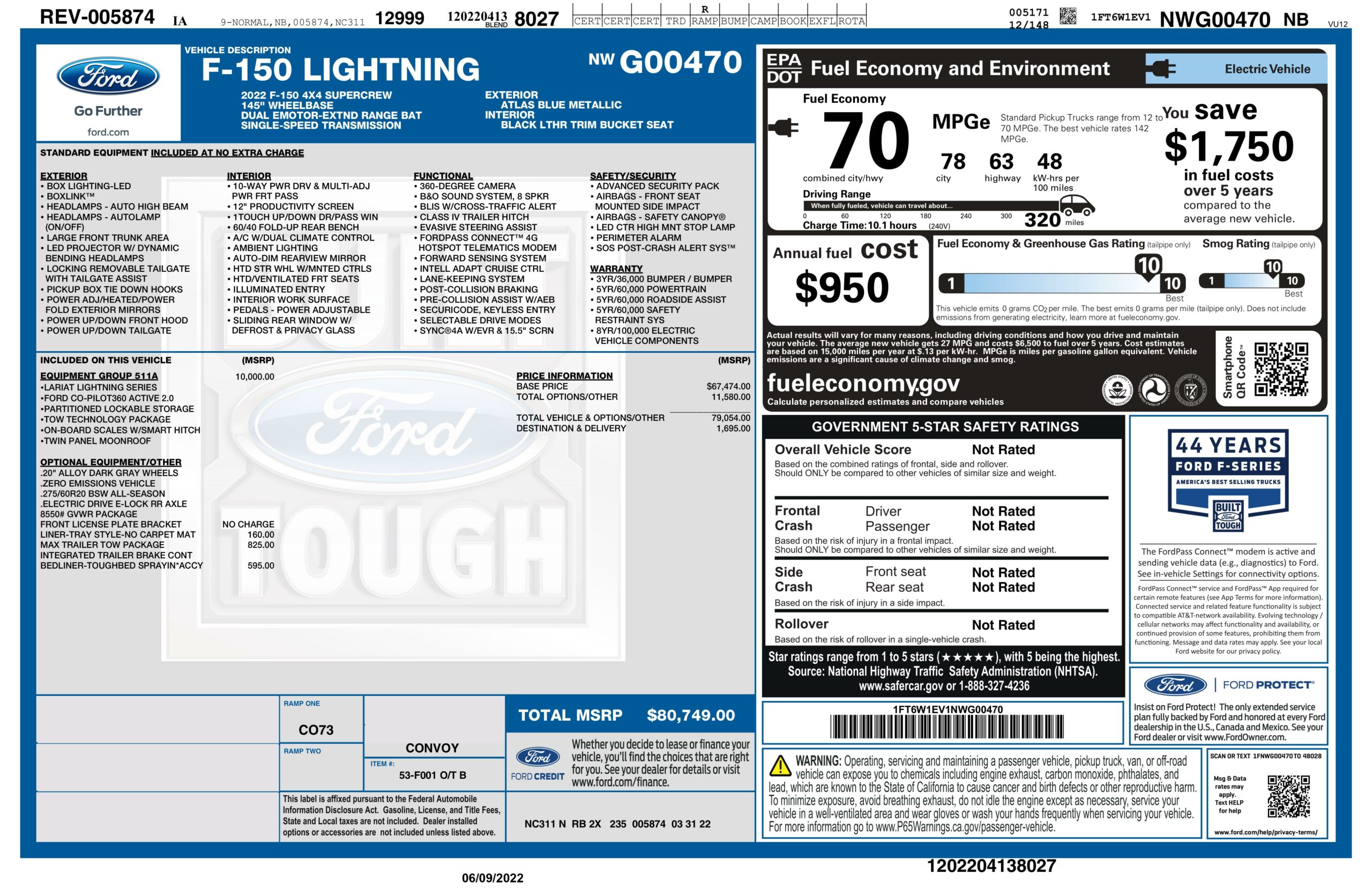 It’s not just dealers in the Midwest with big markups either. Grand Prairie Ford in Texas also has a $30,000 markup on the Lightning. Yet another dealer, Castle Rock Ford, in Colorado also has an arbitrary $30,000 extra tacked on. And Napa Ford, in, you guessed it, Napa, CA, has a Lightning Platinum with a $40,000 premium on top of its MSRP. The problem exists across the nation.

Sawgrass Ford in Sunrise, FL, takes things to a whole new level though. They have a Lightning Platinum up for sale right now listed at $143,874. In fact, they list the MSRP as $141,374 and then add $2,500 in “Upgrades”. Sure, that sounds bad, but get this. The ACTUAL MSRP with delivery listed on the window sticker for this exact truck, is $93,874!

Again, you might think that a $50,000 markup is bad enough but it gets worse because in the vehicle description they state: “NO GAMES! PRICE PLUS SALES TAX AND TAG ONLY…NO DEALER FEES!!! Here at Sawgrass Ford we NEVER charge a DEALER FEE…WE MAKE IT EASY. ***NO DEALER FEE***, ***FREE CARFAX HISTORY REPORT***. 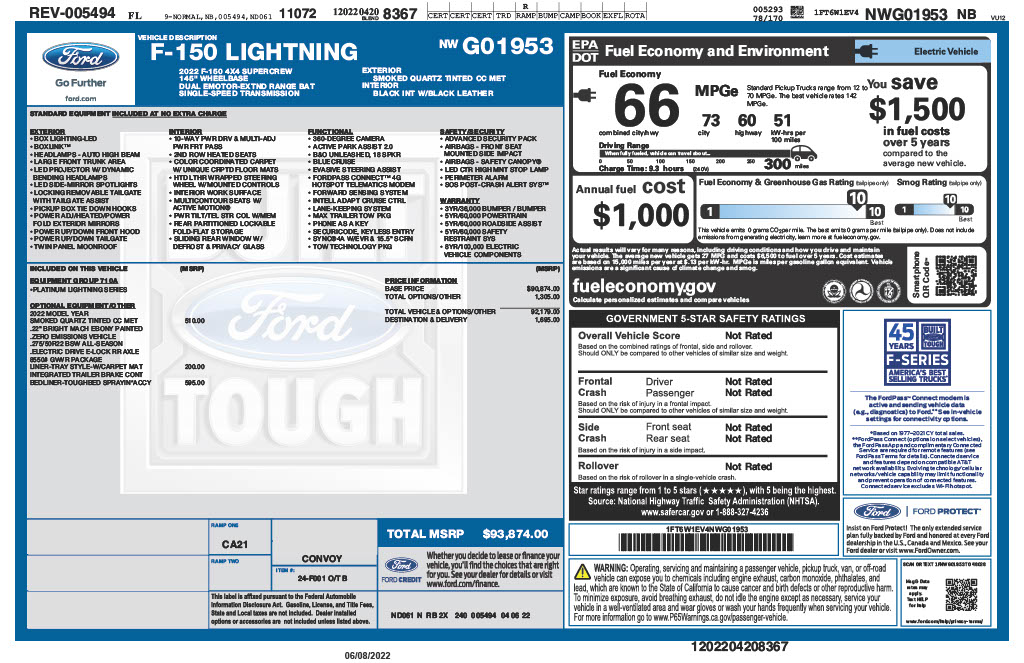 Apparently, they won’t charge you a dealer fee and they’ll give you a free carfax history report… on a brand new truck… so long as you pay the $50,000 markup. Sweet.

If Ford is serious about curtailing these greedy and brand-damaging practices we’d love to see some sort of real action demonstrating it.