If you were asked to think of a quirky two-seater with striking looks, gullwing doors, and lots of production issues that caused it to fail in the marketplace, your first thought would be the Delorean DMC-12 from the 80s, right? Well, did you know that a decade before the Delorean, there was another gull-winged two-seater that similarly flopped? If you didn’t, say hello to the Bricklin SV-1.

The similarities to the DeLorean story are uncanny. You have a fast-talking entrepreneur (Malcolm Bricklin, who introduced both Subaru and Yugo to American car buyers) that managed to convince the local government of a struggling province (New Brunswick in Canada, in this case) to invest in his venture and help him set up an assembly plant in their area; the car, a two-seat, gullwing door equipped GT; and of course the eventual crashing and burning of the project due to quality issues, mismanagement, poor sales, and a shutdown after a few thousand were built. It’s rather surprising no one at DeLorean looked up the Bricklin story and had second thoughts, to be honest.

Read: The Bricklin Was Canada’s Delorean — And Was Just As bad 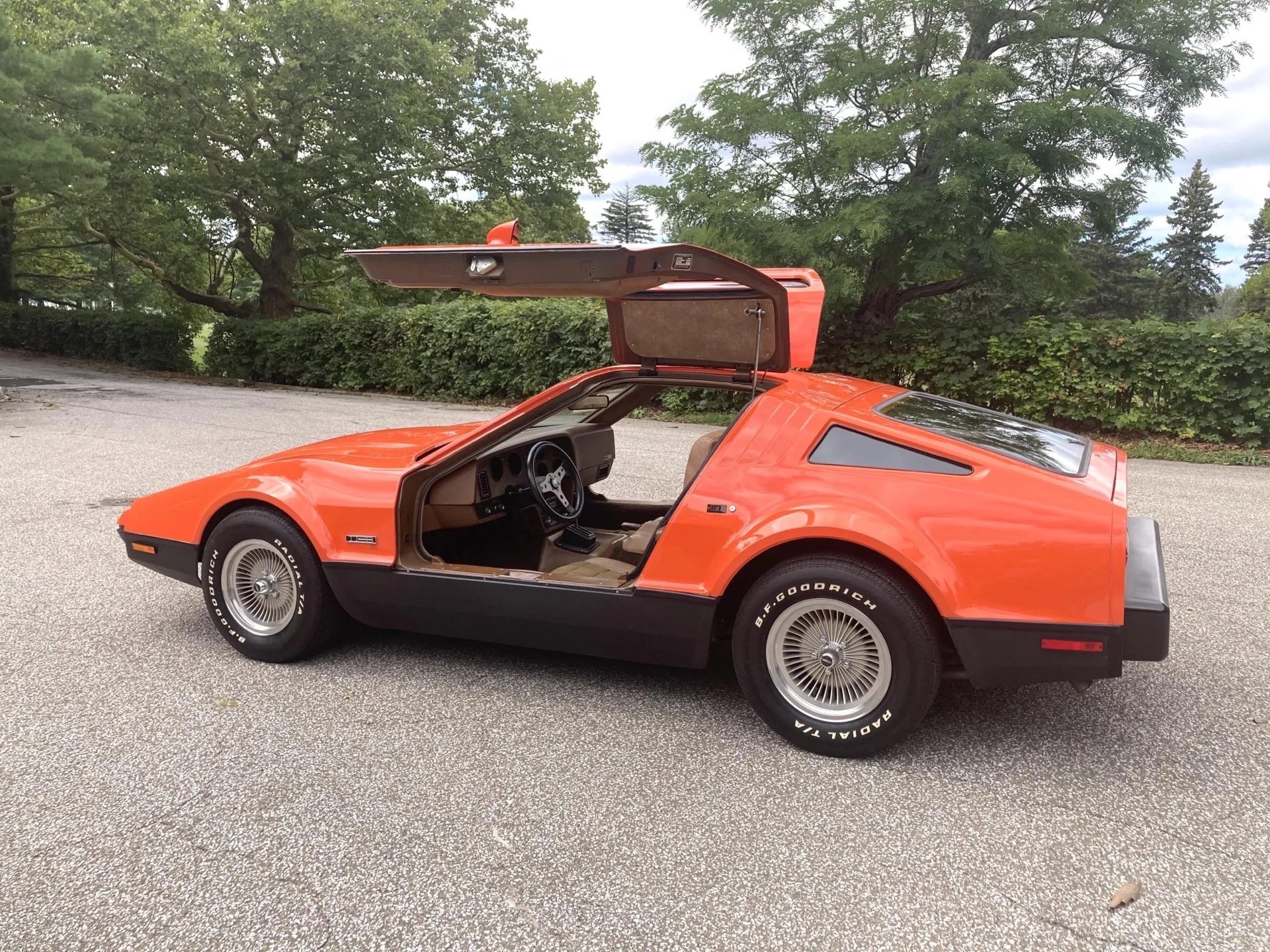 The car itself was billed as a “Safety Sports Car,” and the SV-1 name stands for Safety Vehicle One, in case you were wondering. With its rakish wedge-shaped profile, composite body, and motorized gullwing doors, it certainly makes an impression even today, and must have seemed like it was from another planet back in the 70s. Of the 3,000 built, some 1,200 are known to survive, and there actually are enthusiasts of these cars who collect and keep them going.

Now Bring A Trailer has a single-owner example, which at first glance seems to have time traveled from 1974. The original owner appears to have never driven it after purchase because the odometer only shows 62 miles (99 kilometers). The red-painted composite body seems to be basically as new, with no visible blemishes and glossy paint. The underside is what you’d expect from a car that has not seen use on the road, being as new except for a few spots of minor surface rust that can be expected after almost 50 years of storage (in a den, apparently). 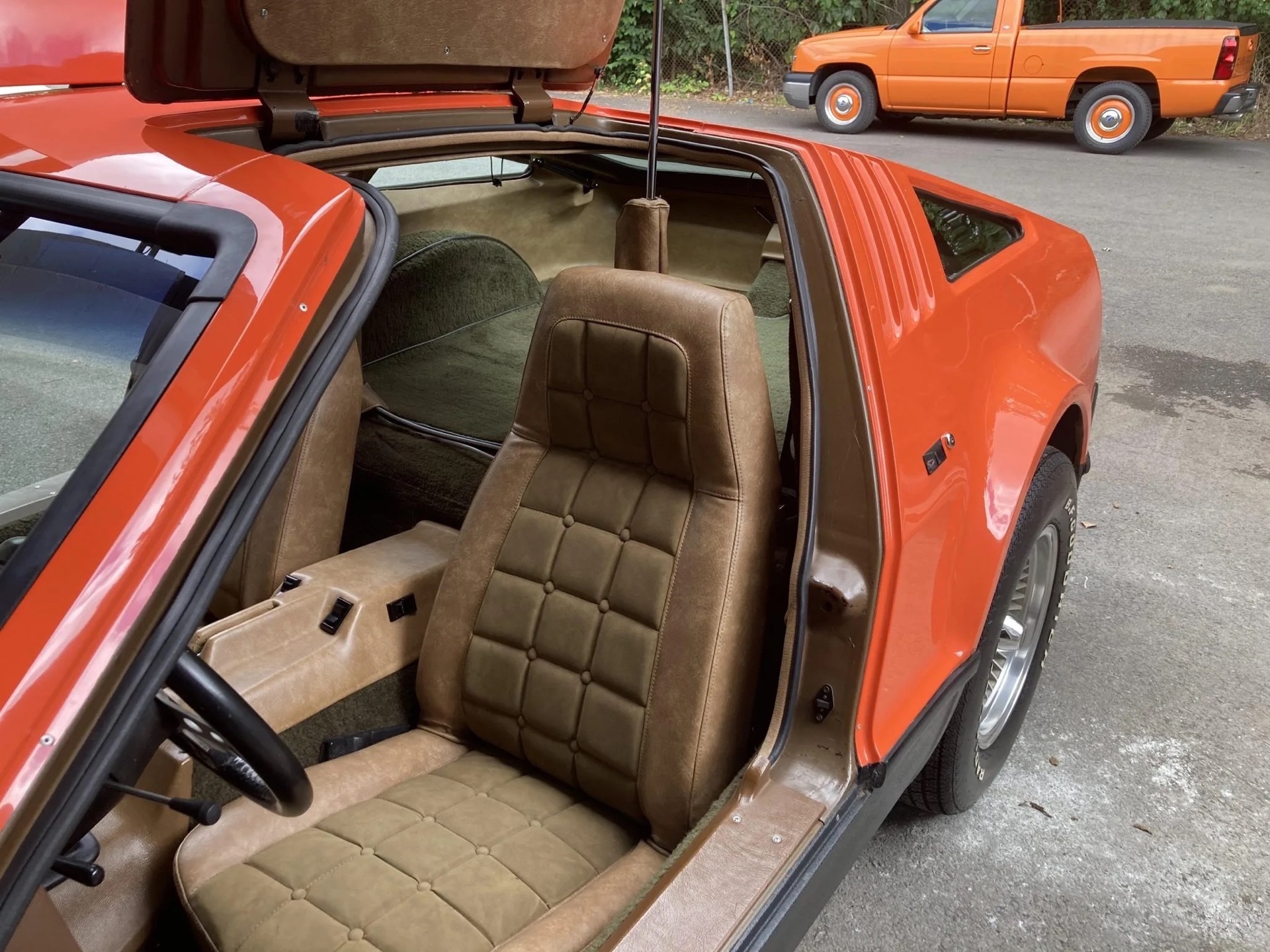 The interior is finished in a very 70s brown and even features button-tufted fabric inserts in the seats, in case you need an extra reminder of which decade the Bricklin is from. The inside seems to be just as well kept as the exterior, and all equipment like the air conditioning and “Bricklin Digi-Plex” AM/FM radio are said to be in working order.

Being a 1974 model, this SV-1 is powered by an AMC 360Ci (5.6-liter) V8 putting out 220 Horsepower and 315 lb/ft of torque, sent to the rear wheels via a three-speed automatic gearbox. It has had an oil change in 2021 and a new battery was fitted just prior to the sale, according to the selling dealer. The engine and drivetrain appear to be in good condition, and the car starts up easily and idles without issues and visible smoke or leaks. The seller states that it has had timely maintenance and service throughout its life, including replacement of coolant hoses and belts with NOS parts in 2018.

See Also: Pristine DeLorean Has Been In Storage Since The 80s

If that isn’t enough, the sole previous owner is said to be a Bricklin collector with very meticulous habits, and this is evident by the condition of the car, which is close as you can get to a factory-fresh SV-1.

If this time capsule example of an interesting chapter in automotive history appeals to you, then bidding currently stands at $32,000, and could very easily reach a record sale price for a Bricklin SV-1.