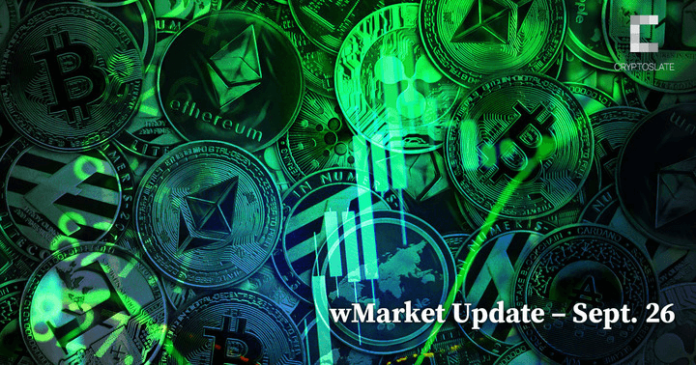 The top 10 cryptocurrencies all saw substantial gains over the period, with Solana leading the pack, growing 9.11% in value. Meanwhile, XRP brings up the rear, posting 2.65% gains in the reporting period.

Macro factors continue to weigh heavily on risk-on assets, and there is no explanation for the breakout.

ETH price actions followed a similar pattern to BTC, bottoming at $1,270 Monday morning (UTC,) leading to a gradual move higher before a 3% upswing on the 02:00 (UTC) candle took effect. Bulls paused at $1,395, with ETH giving back some of those gains.

LUNC leads the top gainers over the last 24 hours, trading around $0.00030 as of press time — up 53.3% over the period. The token was yesterday’s biggest loser, posting 15% losses. Rumors of significant Terralabs Foundation control persist. Its market cap stood at $1.83 billion.

LUNA grew 24.77% over the past 24 hours and was trading at around $2.67207 at the time of publishing. International authorities continue to seek founder Do Kwon. Its market cap stood at $858.88 million.

USTC is up 22% over the last 24 hours to trade at $0.03297 at the time of publishing. The rebranded UST stablecoin continues to trade below its peg price and is similarly afflicted with the same concerns as Terra Classic. Its market cap stood at $323.66 million.

BTRST is today’s biggest loser falling 3% over the past 24 hours to trade at around $2.40989 as of press time. The decentralized talent network is experiencing volatile price action, but over the last month is still 26% up. Its market cap stood at $288.83 million.