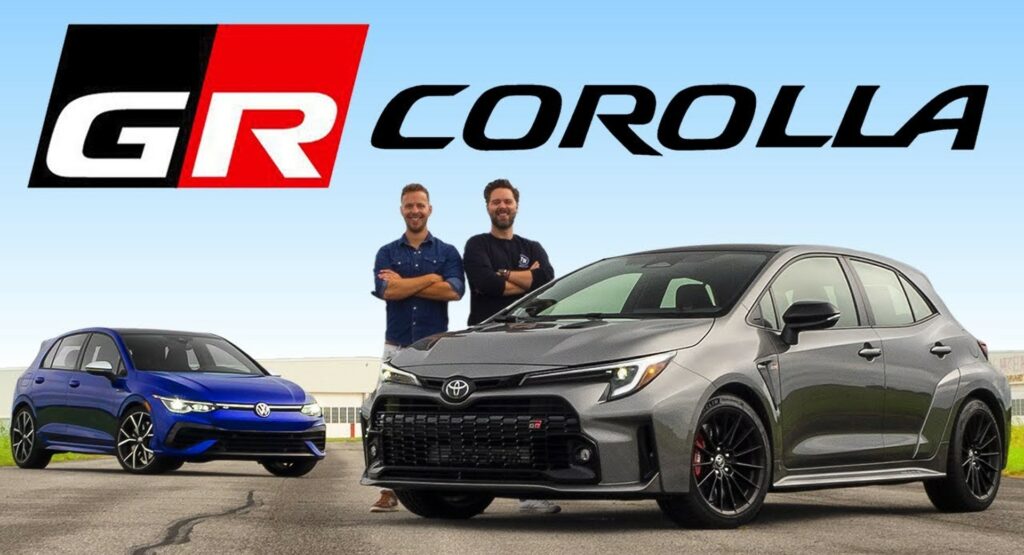 The GR Corolla is a car that we’ve crowned the king of hot hatches but that doesn’t mean that it’s without its challengers. The new Honda Civic Type R is coming later this year but for now, those who want to rival the Corolla can opt for the Volkswagen Golf R. A new track test proves that the pair is just as close on the track as they are on paper.

We enjoyed our time in the GR Corolla both on track and on the street but one thing we didn’t have the chance to do was to put it up against its competition directly. Thankfully, the guys north of the border at Throttle House have done exactly that with a new Golf R and a GR Corolla on their local track.

The Golf R ($44,940) comes in one basic configuration with 315 hp (234 kW), AWD, and the buyer’s choice of either a dual-clutch automatic or a six-speed manual. This particular Golf R has the stick. The GR Corolla seen below is the Circuit Edition ($42,00), which comes with a carbon fiber hood, limited-slip differentials (which are standard on all grades in Canada), and unique hood vents. It also comes with AWD and is only available with a manual.

On the track, these two trade punches. In a straight-up drag race from a dig, the Golf R beats the GR Corolla by a couple of car lengths, a distance that could’ve been bigger had the VW in question had the DSG gearbox. Interestingly, the GR Corolla manages to just beat a third contender, a late model Subaru WRX STI. Of course, driver skill plays a huge role in drag races between cars like these when all of them are equipped with a manual transmission.

That’s less of a concern on a twisty race track where the Golf R still has the Toyota caught in the straights but can’t seem to keep up in the bends. That’s not completely anecdotal evidence either as the GR Corolla manages a lap time of 1:14:65 while the Golf R, despite costing more, can only manage a 1:15:30.

That’s also faster than the last Civic Type R which achieved a 1:14:68. Sure, the new Civic Type R is likely to leapfrog the Toyota again, but it has more power and again, costs more. Which would you take? Let us know in the comments below!

Share
Facebook
Twitter
Pinterest
WhatsApp
Previous articleWhat Will Happen To The Golf And 3-Series When The ID.3 And i4 Are The Default VWs And BMWs?
Next articleFacebook Group Helps Car Theft Victims In Portland Find Their Vehicles