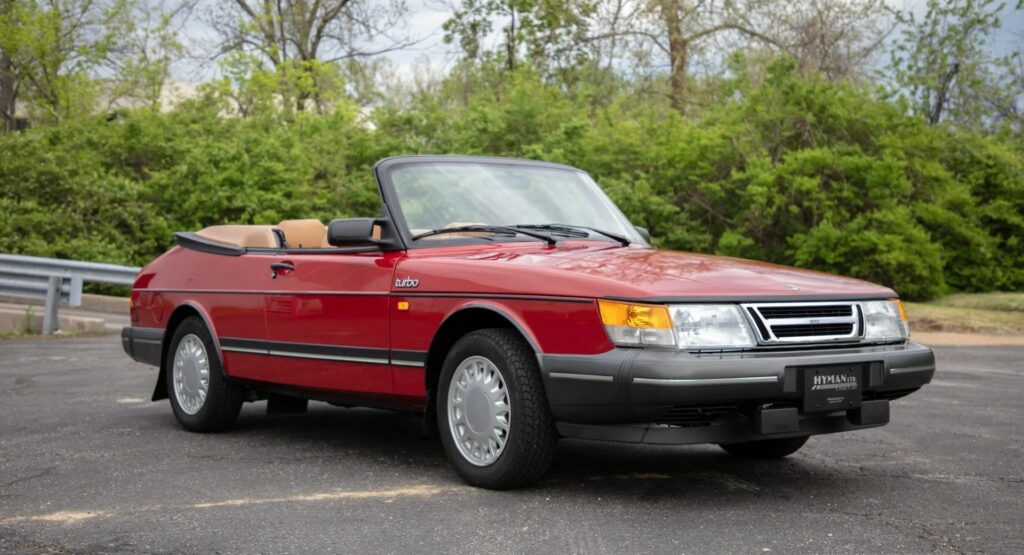 Over the last few years, we’ve seen pricing on both new and used cars skyrocket to unheard-of heights. Recently though, it’s looked like some of those prices are starting to finally cool off. Despite that, it didn’t stop one person from paying $145,000 for a 35-year-old front-wheel drive Saab with just 160 horsepower (119 kW).

Of course, the condition of this particular 1987 Saab 900 Turbo Convertible makes it worthy of special consideration. First of all, it had just 246 miles (395 km) on it at the time that the auction concluded. That means that on average, this car was driven just 7.02 miles every year since it rolled off of the production line.

It’s finished in bright Cherry Red paint that’s in about as perfect a condition as anyone could ask for. It also has a desirable five-speed manual transmission and a power-retractable soft top along with heated seats, cruise control, and a Clarion cassette stereo. The combo of features was too good for the buyer to pass up. According to his comments in the auction listing, he took his wife on their first date in another Saab 900, his first car, just like this one.

Read More: Could This Stunning Saab 9-5 Sendoff End Up Being A Steal Of A Deal?

He also says that he plans to drive this car every year on their anniversary so don’t expect it to just sit in a garage all the time. To that end, the seller had the car fully prepared for future road use despite its delivery mileage. The fuel tank was removed and cleaned, the fluids were flushed, and the head gasket, thermostat, and fuel pump were all replaced.

With all of that completed, we imagine that riding in this Saab is as close as any of us could get to a time machine. For the buyer, that must be even more accurate as memories of his first car and his first date will surely come flooding back as he slips into the leather bucket seats and turns over the engine.

Sure, he could’ve bought a new Corvette Z06 (not to mention a bunch of other supercars) with this kind of cash, but he let his heart lead the way. We just wonder how his wife will feel about it. According to him, she only gave her blessing to spend $80,000.