This Weird Subaru WRX STI Convertible Is Asking For $60,000

Does a standard Subaru Impreza WRX STi not quite float your boat? Would you prefer to have the wind in your air while enjoying the STi’s ferocious 2.5-liter engine and near-infinite levels of grip? If you answered yes to either of those questions, then this particular 2011 WRX STi might be perfect for you.

Making this STi unique from all others is the fact that it is a Convertible. Yes, you read the correctly, a convertible. The car was modified by Newport Specialty Cars of Placentia, California in January 2011 and we actually published an article about it in March 2011. Since that time, it has raked up 11,433 miles (18,399 km) and now carries with it a $59,980 asking price.

Read Also: This Is Why There Won’t Be A New Subaru WRX STI

This isn’t the first time the car has popped up for sale online. In 2017, Manchester Subaru in New Hampshire was looking to part ways with it and was asking $26,967. It has now been listed up for sale through Patriot Nissan of Salem, New Hampshire and while we’re not convinced that it is worth almost $60,000, it is certainly unique. 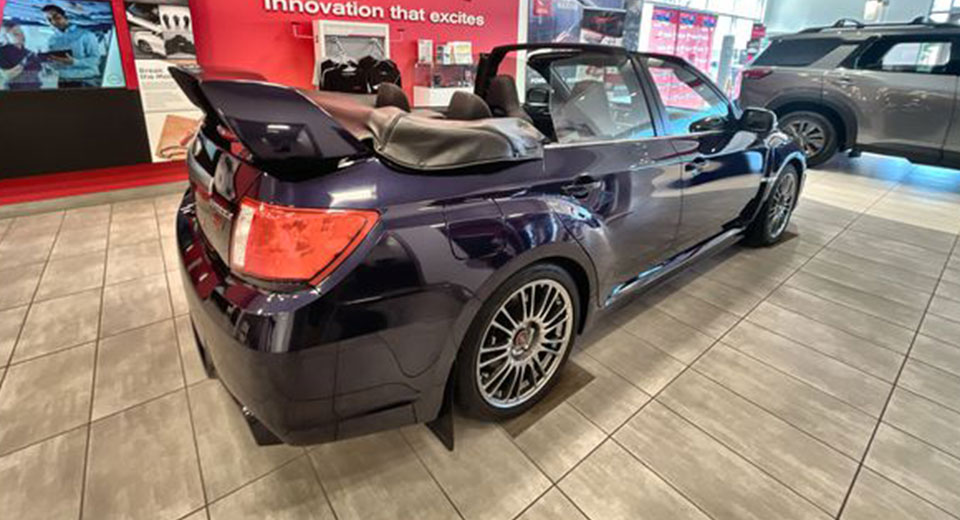 In converting the car into a convertible, Newport Specialty Cars chopped off the roof but retained the B-pillars. It then fitted the WRX STi with a folding soft top. The Drive notes that Newport Specialty converted just five STi models into convertibles and that just four of them remain.

While we can’t comment on the structural rigidity of the heavily-modified Subaru, the conversion looks to have been relatively well done and doesn’t impact the car’s practicality all that much. In fact, it retains the original four-seat layout as the soft top folds away onto the rear decklid. For us, it is not the convertible roof that is the highlight of the car but rather the lovely Plasma Blue Pearl exterior finish.