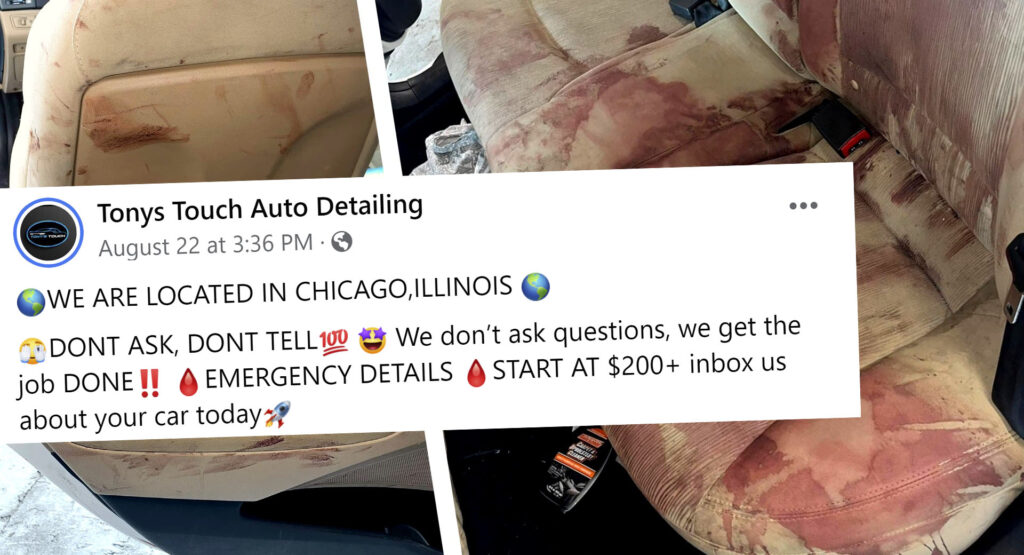 Detailing shops often use before and after shots of filthy and neglected vehicles in order to promote their services. However, a company from Chicago opted for something quite different and gory enough to star in an episode of the Sopranos or even Breaking Bad. They created a social media post with a photo of a car interior soaked in blood, before showing the cleaned version.

Predictably, the Facebook post by Tony’s Touch Auto Detailing attracted a lot of attention, with more than 14,000 shares in just a couple days. Many people commented on the “We don’t ask questions, we get the job DONE” that was humorously written in the description, while trying to guess what caused this mess.

The light-colored fabric upholstery on the rear bench seat of the Hyundai is covered in what appears to be blood stains, shocking unsuspecting viewers. The cabin looked like a crime scene, and some of the commenters were really worried about what happened. Following the great deal of attention on social media, the shop assured everyone that there were no injuries involved, adding that “The point of this post is to show versatility when it comes to removing stains as well as great advertising”. Indeed, with so many comments, likes, and shares, this proved to be a very successful advertising tactic with zero costs.

If we had to guess, the most plausible explanation for the stains – assuming it is blood – is that a pregnant woman was driven to the hospital inside this vehicle while giving birth. As noted by a female Facebook user, this could be the aftermath of a placental abruption during an in-car delivery. In any case, we must admit that the shop did a really good job in cleaning up the rear bench, door cards, and seatbacks, resulting in another satisfied customer.