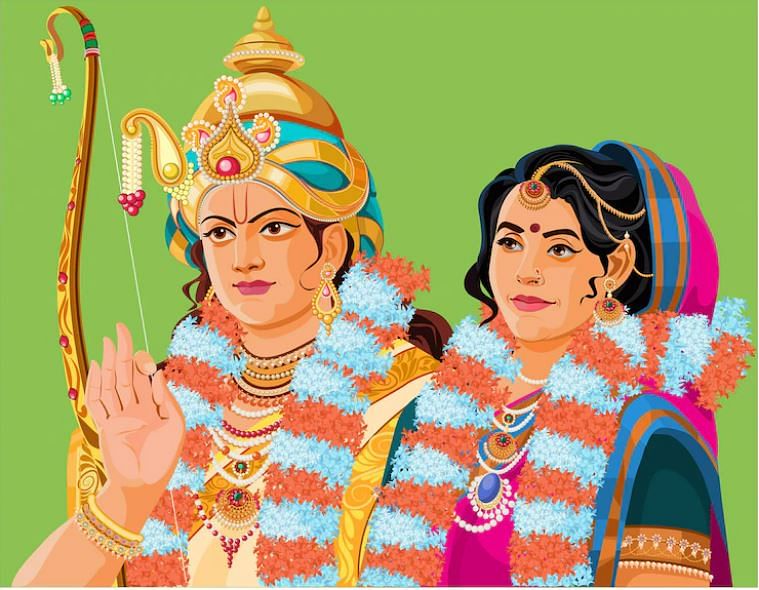 King Janak, Goddess Sita’s foster father, organised a Swayamvar so she could select the right person to be her husband. As a result, a number of monarchs and princes, including Lord Rama participated in it to show off their might. The devoted father, King Janak, wanted his daughter to wed the guy who was deserving of her hand. Subsequently, he displayed the Pinaka bow that Lord Shiva had given him and asked the kings and princes to raise it as a test.

But none of the revered and renowned kings could so much as budge the bow from its place. Janak was saddened by this failure and questioned whether Sita’s stature could be matched by anyone. Shri Ram stepped up to the plate as King Janak sat thinking over his daughter’s upcoming wedding. Not only did he move the bow, but he also casually lifted and snapped it! King Janak was elated by this beautiful sight and thrilled that his daughter had found a good match. The marriage was then solemnised by organising the wedding ceremony.

In Janakpur and in other temples, Vivah Panchami is observed with great fervour and passion. To offer homage to the Lord and his spouse, special pujas are conducted. It’s interesting to note that Vivah Panchami is also credited as the day Goswami Tulsidas finished the Ramcharitmanas, an Awadhi adaptation of the famous Indian epic Ramayana (originally composed in Sanskrit by Valmiki).

Additionally, it is also believed that rituals performed on this day improve married couples’ quality of life. In marriage, any challenge or issue is also resolved, and people encounter joy, tranquilly, love, and optimism.