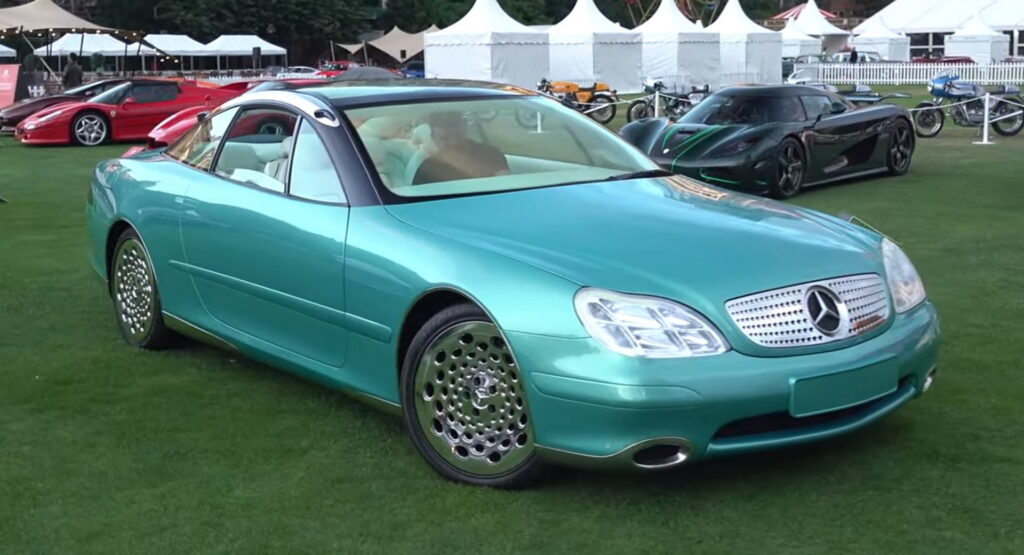 Concept cars are often weird, but few were as good at predicting the future as the 1996 Mercedes-Benz F200 Imagination. Seen here arriving at the London Concours, this is a rare opportunity to see this profoundly unusual concept car.

Seen descending from its travel trailer, one of the concept car’s peculiarities may actually have made it easier to get out. The doors, which open a bit like Koenigsegg’s dihedral ones, actually appear to give the driver a reasonable amount of space for entry and egress, which a normal one might not have.

Another of the car’s peculiarities would have made be nervous, though. Unlike a normal car, the F200 Imagination is controlled with a joystick. I think getting any classic car off a car carrier at the London Concours would probably make me nervous, but doing it while also using a unique steering method would do little to steady my nerves.

Read Also: Mercedes’ New Hyperscreen Can Trace Its Roots Back To The F 200 Concept Of The ’90s

From a mechanical point of view, the F200 Imagination’s engine sounds almost disappointingly normal. Thanks to its huge glass canopy and its enormous screen-dashboard, and its drive-by-wire controls, it reads more like an EV than an internal combustion vehicle. Indeed, as we covered previously, the F200 Imagination has many features that you can find on the EQS. The massive screen, for example, is reminiscent of the Mercedes Hyperscreen. It also features sideview cameras, rather than mirrors.

The screen can also display information for your telephone, navigation, radio, CD, and DVD and the front passenger (who can also control the car thanks to those joysticks) can listen to media with wireless headphones. That’s all pretty impressive for a car that was introduced at the 1996 Paris Auto Show.

On the lawn at the London Concours, it all seems to work kind of seamlessly, save for one or two harsh stops. Having reportedly sold for close to $10 million, it’s hard to argue with the price given how unique the concept is.