Following its debut last month, the third generation of the BMW X1 embarked on a European tour, allowing automotive journalists and potential customers to get a closer look prior to its market launch this autumn. Last weekend, the SUV was showcased in Greece, and we were there to see it in person.

The X1 looks slightly better from up close than in the photos, which is the case with most of the recent BMW models. The body is more sculpted than before, with the matte-effect paint of this example highlighting BMW’s new style of surfacing. The front looks taller due to the positioning of the enlarged kidney grille and the more inclined LED headlights, while the bumper is now closer to the sportier X2. The cleaner windowline, the sleek door handles, the toned shoulders and the slimmer LED taillights are welcome updates, making the SUV look larger for a greater road presence.

See Also: 2023 BMW X1 Configurator Goes Live In EU, Do Your Best Or Worse And Show Us Your Build

Both variants of the X1 we came across were fitted with the optional M Sport package which includes more angular intakes at the front, body-colored wheelarches, and a sporty rear apron with a glossy-black element above the diffuser. They also came fitted with matching sets of 20-inch wheels by BMW Individual which enhance proportions, combined with a frozen gray shade for the exterior.

Note that there is no visible exhaust to either of the models, with BMW being determined not to join the faux tailpipe trend – we have to give them credit for that. Our recent scoop stories confirm that the more powerful X1 M35i xDrive variant will feature quad tailpipes which are not limited to the full-blown M models anymore.

The new X1, like the 2 Series Active Tourer, is based on an evolved version of the UKL platform but its footprint has grown compared to the model it replaces. More specifically, the X1 gained an extra 43 mm (1.7 inches) in length, measuring 4,500 mm (177.2 inches), with 23 mm (0.9 inches) of them added between the axles resulting in a 2,692 mm (106 inches) wheelbase. Still, the model retains a safe distance from the larger X3 which is also getting a new generation in the coming years.

Read Also: The Fate Of BMW’s Compact Models In The Electric Era Is Still Undecided

At the event, we got to sample two different specs for the interior – one with black microfiber upholstery and blue stitching, and another with Oyster Venasca leather. Both came with the new sports seats which look and feel really nice, offering an excellent amount of comfort and support. We also got our hands on the slightly overdesigned three-spoke steering wheel with a very thick rim setting the stage for the presumably driver-centric character of the SUV.

The ultimate highlight of the interior is the new standard-fit  BMW Live Cockpit Plus incorporating a 10.25-inch digital instrument cluster and a 10.7-inch touchscreen for the infotainment, with a rather large gap between them. The curved panel proved to be attention-grabbing, to say the least, looking significantly more modern than the more traditional setup of the previous generation.

The new iDrive Operating System 8 has already found its way in several new BMWs after being introduced in the iX, bringing fresh graphics and more features into the mix, free of the usability nightmares of the past. BMW went for a clean look without physical buttons or shortcuts, but at least the climate controls are always visible and accessible on the bottom of the touchscreen, and voice control is said to be improved. 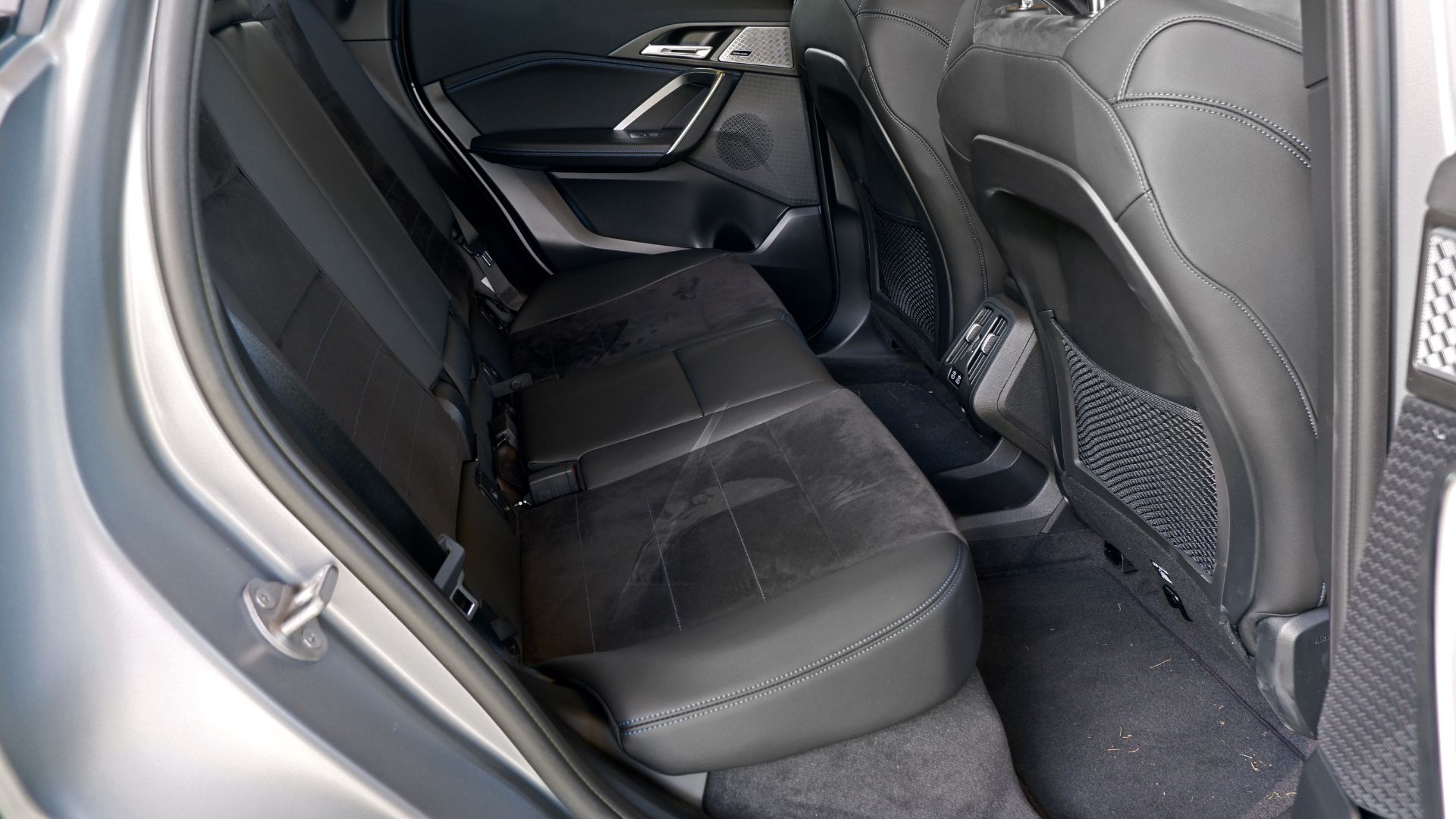 The interior quality remains top-notch as with the previous X1 which was class-leading in this area. Soft padded plastics are covering most areas, with metal inserts on the dashboard and doors matching the optional Harman Kardon speakers. Another highlight is the floating center console which looks cool but it sacrifices some space from the storage compartment in the armrest, with a less useful second tray underneath. BMW knows that most of us carry large smartphones so they added a dedicated wireless charging space for it in the lower part of the center console, with a harness keeping it in place at all times.

Sitting at the back, you can feel the extra roominess compared to the previous generation, with sufficient legroom and plenty of headroom. It will still be a little bit tight for three adults but it is now slightly more accommodating for taller passengers, even with the optional panoramic sunroof. Amenities at the back include two USB-C ports for charging and A/C vents which are a must-have in the segment. Optionally, BMW is offering sliding rear seats but only in the petrol and diesel variants since the PHEV and BEV models do not get the same freedom in packaging due to the batteries. Finally, some variants get reclining seatbacks. 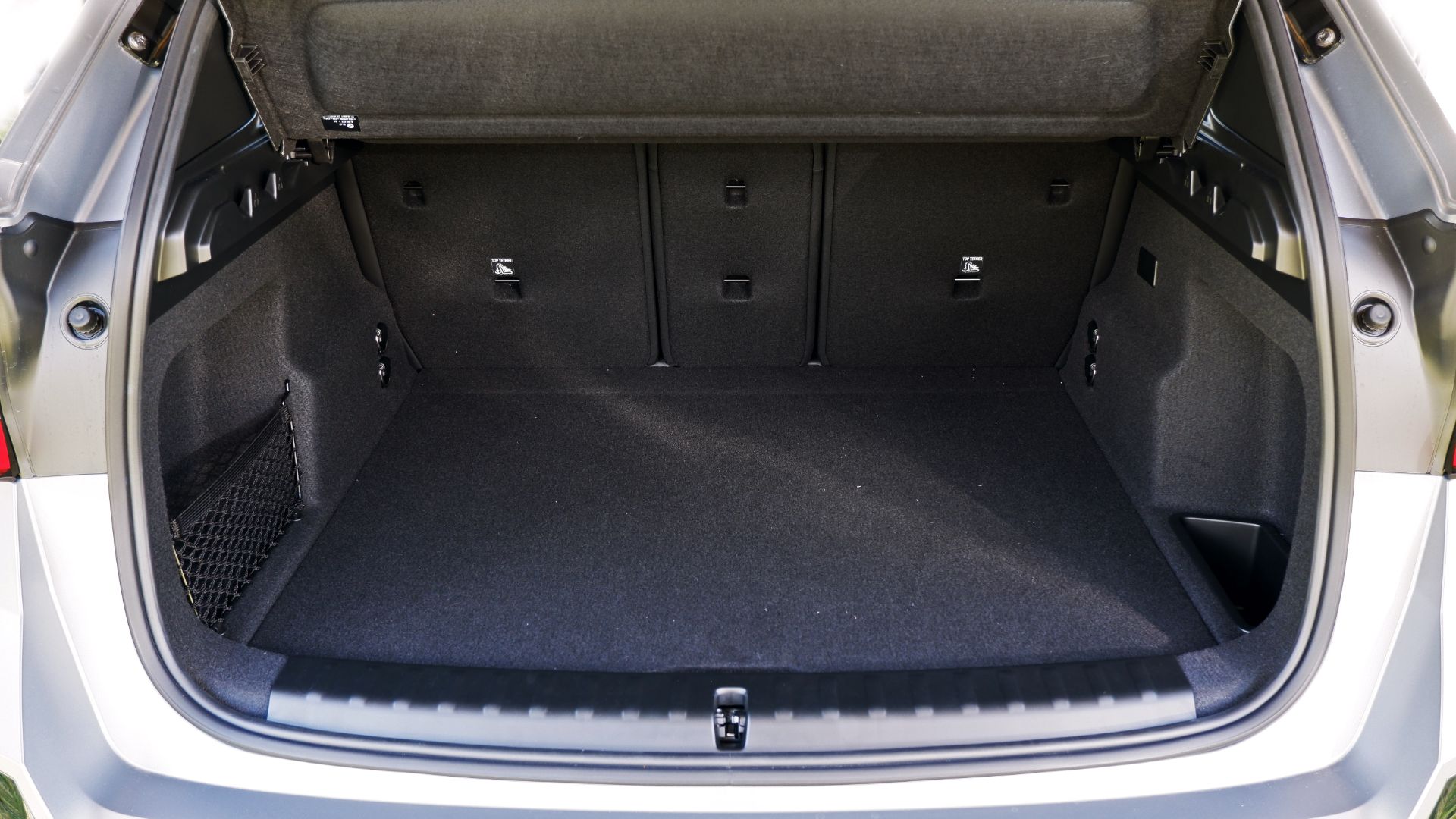 Boot space has also grown to 540 lt (19.1 cubic feet) for the petrol and diesel variants, or 490 lt (17.3 cubic feet) for the PHEV and BEV models. All of them have a practical shape with the difference occurring in the extra compartment under the boot’s floor. From the looks of it, you could easily fit a couple of large suitcases thanks to its length.

In terms of powertrain options, the BMW X1 will be offered in petrol, diesel, plug-in hybrid, and fully electric (iX1) form. This is the first time the Bavarian company offers that many options in their entry-level SUV, following the example of the larger X3. The ones we saw at the event were the petrol-powered X1 xDrive 23i and the plug-in hybrid X1 xDrive 30e.

The first is fitted with a turbocharged mild-hybrid 2.0-liter four-cylinder engine producing 215 hp (160 kW / 218 PS). As for the plug-in hybrid, it comes with a turbocharged 1.5-liter three-pot and a rear-mounted electric motor producing a combined 322 hp (240 kW / 326 PS). Even more impressive is the advertised WLTP range of the X1 xDrive 30e, with preliminary figures stating 89 km (55 miles). 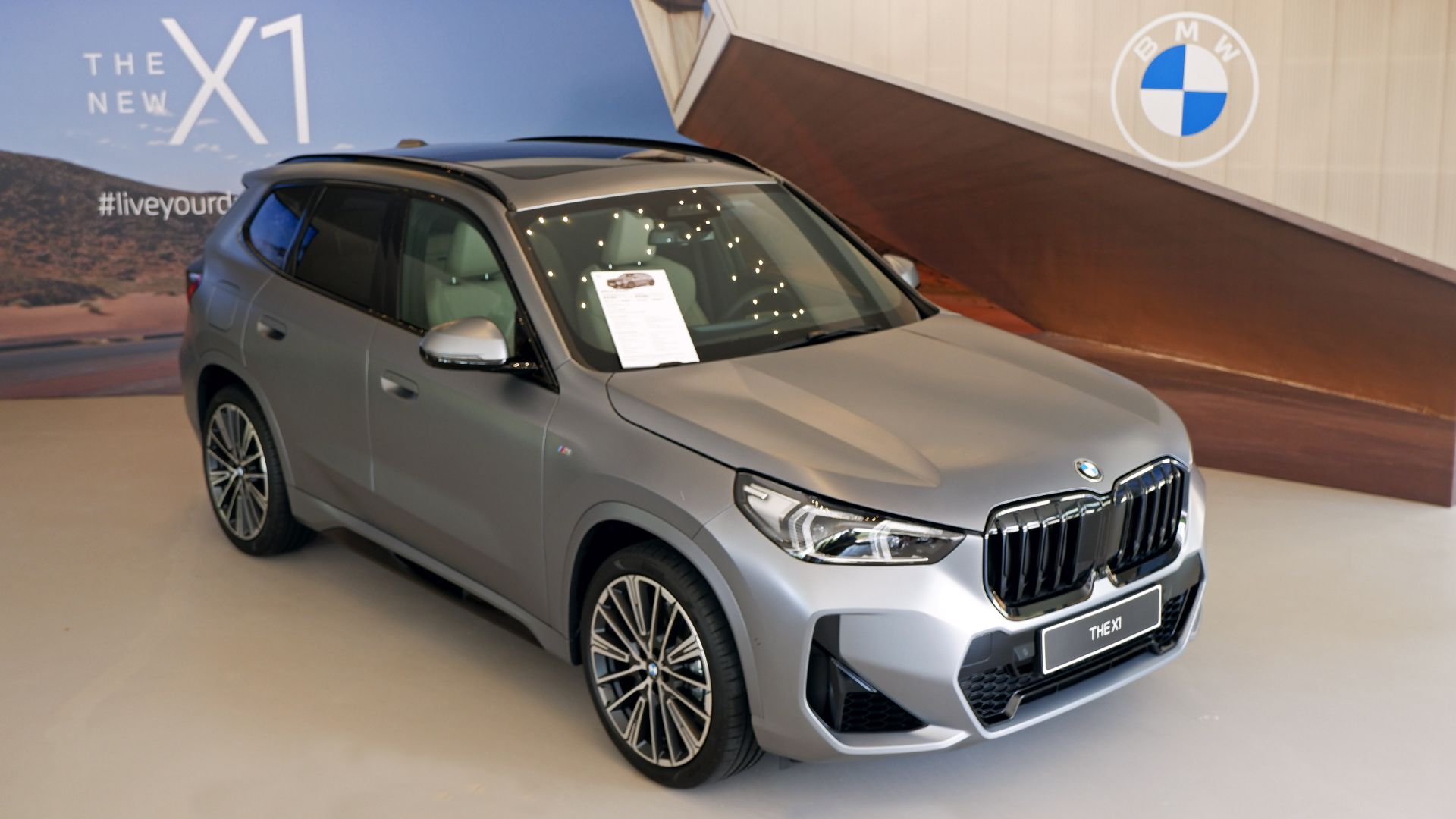 Unfortunately, we didn’t get the chance to drive the BMW X1 because the models were pre-production prototypes, with the finalized product arriving in three months’ time. The market launch of the new X1 is scheduled for the last quarter of 2022, something that applies not only to Europe but also to the US. Petrol and diesel models will come first in October, with the plug-in hybrid following in November.

Prices for the entry-level X1 sDrive18i start from €36,920 ($37,593) in Greece, from €43,900 ($44,700) in Germany, and from £36,225 ($43,577) in the UK but the cost wildly increases as we move further up to the lineup. Rivals of the model include the soon-to-be-facelifted Mercedes-Benz GLA, the Audi Q3, the Volvo XC40, and the Alfa Romeo Tonale. Our next meeting with the new X1 will be scheduled in a few months’ time when will hopefully have the chance to drive it and see if BMW’s engineers managed to improve the already exceptional suspension setup of the outgoing model.