Why driving is bad for America

Walking along Dale Street  in St. Paul 8 years ago, I paused to watch an old man slowly climb into a pickup truck stopped temporarily in the right lane. Within seconds, a driver came up behind the truck, and honked their horn repeatedly as this poor guy struggled with his cane, climbing into the vehicle. This went on for a long while; it seemed like more than a minute, and was excruciating. I could only imagine how horrible the old man must have felt.

At the time, I remember thinking that the incident would never have occurred outside of a car. There’s no way anyone screams repeatedly at elderly people trudging down the sidewalk. People don’t sidle up behind a grandpa in the grocery store line and yell, “Hurry the f*** up!”

But when all you have is a horn, every interaction between drivers turns vaguely abusive. I don’t even know why this incident in particular stuck in my head, because if you spend any time on the busy roads, you see countless uncivil acts every day.

This is to say that the recent New York Times opinion column by Ross Douthat, “What Driving Means for America”, rubbed me the wrong way. Pontificating on a road trip, Douthat somehow comes to the general conclusion that driving cultivates social qualities like “independence, cooperation, and responsibility,” and is the communitarian glue holding our country together.

To me, this seems utterly backwards. If anything, a nation where driving is the most common mode of public interaction turns us all into solipsistic, seething cutthroats.

The limits and freedoms behind the wheel

In his column, Douthat relies heavily on a new pop philosophy book by Matthew Crawford, “Why We Drive.” Mostly a collection of vehicular anecdotes, Crawford sprinkles just enough philosophical concepts throughout the text to give it a thin veneer of scientific legitimacy. For example, Crawford introduces “homo moto” (the driving human) to refer to a sociological concept known as the “extended subject,” which is a genuinely a useful way to conceptualize our relationship with technology.

Few technologies morph our subjective agency more dramatically than the automobile. But contrary to what Crawford describes, the “driving subject” is not a one-way street leading to greater freedom. While driving extends our ability to move at high speed, it comes at the cost of almost every other kind of action. Tightly strapped into a confined space, driving allows for only the slightest movements of our hands, feet, and head. Meanwhile, our senses are cut off in steel cocoons: we cannot smell a flower or hear a bird. It’s nearly impossible to even make eye contact with another moving driver, let alone have a conversation. 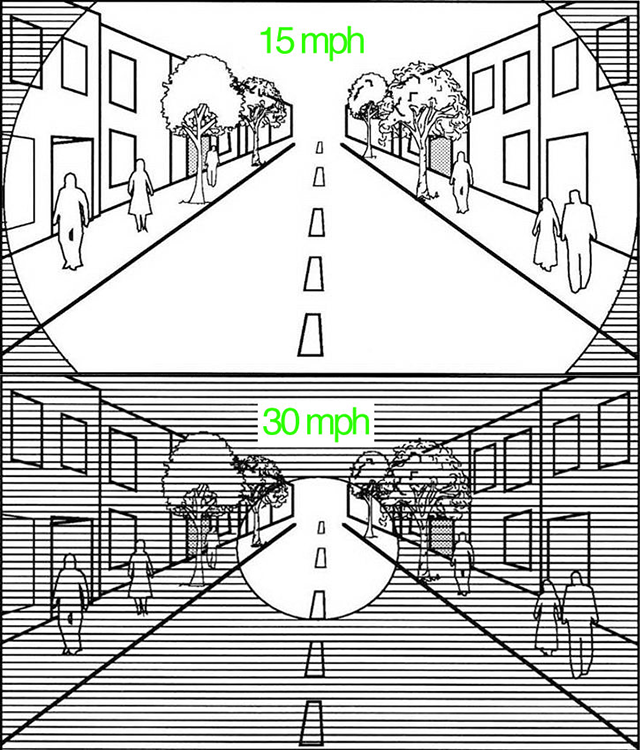 Instead, we can only hurtle forward and, even there, our decisions are greatly curtailed. American roads are painstakingly engineered spaces, down to the highly regulated fonts appearing on signs. Drivers have precious few choices about what to do or how fast to proceed — no faster than 70 or slower than 40 on most highways — and the vast majority of the time we must stay in our lanes. The worst case scenario: a few years ago, the Minnesota State Patrol launched a special press campaign to inform the public not to stop if a family of ducks appears on the freeway (imagine explaining that to your kid in your car).

The truth is that driving is a dull slog, requiring just enough mental energy to keep you from daydreaming. Instead, faced with the tedium of a commute, most drivers concoct elaborate narratives. As Tom Vanderbilt describes in his wonderful pop science tome, “Traffic” (a vastly superior book), all drivers become the heroes of their own tales. If we change lanes during a traffic jam, or get off one exit early, we tell ourselves we have accomplished something, out-competed the anonymous crowd. In reality, however, these decisions make little difference.

Ross Douthat ends his essay with the provocation, “If you do not drive your neighborhood or region, what form of adult mastery and knowledge are you seeking in its place?”

Au contraire. I believe you gain meaningful knowledge of a neighborhood only by getting out of your car. There’s no richer, more rewarding engagement with a community than that of a pedestrian wanderer, who learns things about their cities that are unimaginable to someone strapped into a cockpit. Cops used to know this, which is why walking a beat worked to prevent crime in a way that a SUV patrol could never do.

What driving really means for America is a rather tragic tale that allows most people to entirely escape the comments and connections – weak and strong – that occur in public space of the street. We replace it with a Darwinian struggle for asphalt, viewing our neighbors as nothing more than a relentless barrage of competitors for space and speed. Apart from an occasional bumper sticker, no meaningful social interactions take place on a freeway. Instead, most driving is little more than a relentless slog that puts the lie to Douthat’s claim that the everyday experience of driving instills “virtues well suited to citizenship.” Cars are the great American leveler, turning everyone, good or bad, left or right, new immigrant or CEO, into isolated selfish goons.

All this has been made far worse during COVID, by the way, where fatalities on roads have spiked as speeding has skyrocketed. Anecdotally, it sure seems like reckless driving is getting far worse, and the data backs it up. Thanks to a combination of social isolation, frayed ties, an abdication of enforcement, and ever more powerful vehicles, safety on our streets has regressed steeply in the last three years.

But there’s another America waiting for us if we leave driving behind. I have a personal rule that whenever I see kids out on the sidewalk with a lemonade stand, I require myself to stop. To me, lemonade stands are excellent way to build community, teach kids about public life, and (of course) get some lemonade, so I support them every chance I get.

But when I’m driving, my lemonade principles are frequently frustrated. I’ll spot the kids’ table too late, or else I’ll see it, but it’s impossible to cross three lanes of speeding traffic, or to pull a U-turn in a busy intersection, or to find somewhere to park, even for a minute.

But my lemonade stand stop percentage while not driving a car, on a bike or on foot? Still going strong at 100%. Surely, this is the best way to experience America.